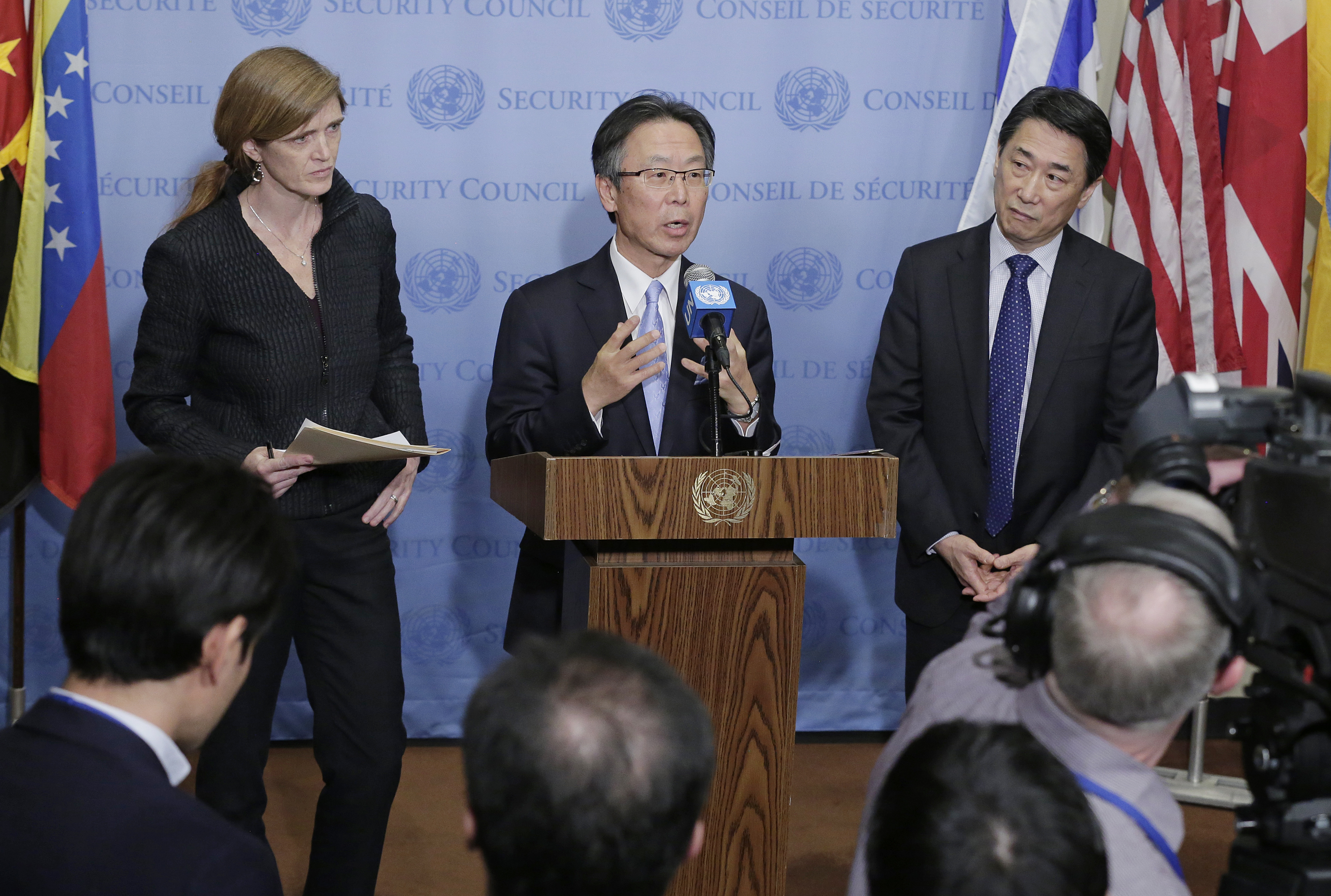 The international community is debating new punitive measures in response to recent actions by North Korea to advance its nuclear and missile capability.

UN Secretary-General Ban Ki-moon condemned North Korea’s Feb. 7 satellite launch and a Jan. 6 nuclear test as violations of previous Security Council resolutions. Last month, North Korea launched a three-stage rocket and placed a satellite into orbit. The rocket launch is of concern to the international community because of the potential scientific advantage it provides Pyongyang for developing a long-range missile that could eventually be outfitted with nuclear warheads.

In January, North Korea conducted its fourth nuclear test, which had a yield of about 10 kilotons. Pyongyang said it had tested a hydrogen bomb, which would signify a technological advance for the state. Government officials and independent experts expressed serious doubts about the claim.

In a statement shortly after the satellite launch, Ban said, “It is deeply deplorable that [North Korea] has conducted a launch using ballistic missile technology in violation of relevant Security Council resolutions.”

The Security Council last adopted a resolution on the North Korean nuclear program in 2013. Late last month, the council was deliberating on an additional resolution condemning the recent nuclear test explosion, reaffirming restrictions on North Korea’s nuclear and missile development programs and the financing of them, and imposing new restrictions.

Ban reiterated his call to Pyongyang to “halt its provocative actions and return to compliance with its international obligations” and his “commitment to working with all sides in reducing tensions and achieving the verifiable denuclearisation of the Korean Peninsula.”

After Pyongyang’s nuclear test in January, Ban condemned the test “unequivocally” at a press conference.

The bill, H.R. 757, was introduced in the House of Representatives in February 2015 by House Foreign Affairs Committee Chairman Ed Royce (R-Calif.) and a bipartisan group of five co-sponsors. The bill initially stalled, but after the Jan. 6 nuclear test, it gained momentum and moved through the House and Senate, where the Foreign Relations Committee added several new sections. One imposed a requirement on the secretary of state to report to Congress on a review of U.S. policy toward North Korea, based on a “complete interagency review of current policies and possible alternatives,” and provide recommendations for legislative and administrative action. Another addition requires the president to direct development of a strategy to improve international implementation and enforcement of existing UN sanctions specific to North Korea.

After the Senate passed the bill on Feb. 10 by a vote of 96-0, Foreign Relations Committee Chairman Bob Corker (R-Tenn.) issued a statement saying the legislation provides “a more robust set of tools to confront the growing North Korean nuclear and ballistic missile threat.” The House approved the Senate version of the bill on Feb. 12.

The United States previously has imposed national sanctions on North Korean entities for actions materially contributing to the proliferation of nonconventional weapons or their means of delivery, most recently in December 2015.

China has signaled support for punitive actions against North Korea. In remarks on Feb. 16, Chinese Foreign Minister Wang Yi said that North Korea must “pay the necessary price” under new UN sanctions, according to a report by South Korea’s Yonhap news agency. Wang said the purpose of a forthcoming UN resolution would be to “stop North Korea from going any further down the path of developing nuclear weapons.” He stated that North Korea must return to the six-party talks, a negotiating forum that Pyongyang left in 2009.

Japan and South Korea also have taken action against North Korea in response to its recent actions. Tokyo intends to tighten restrictions on travel between North Korea and Japan and to ban North Korean ships from docking in Japanese ports, Yoshihide Suga, Japan’s chief cabinet secretary, said at a Feb. 8 press briefing.

On Feb. 10, South Korea suspended its participation in the joint industrial venture at Kaesong in North Korea. The Kaesong Industrial Complex has served as a cooperative project for the two Koreas since 2002 and the city of Kaesong as a venue for diplomatic meetings as recently as December 2015. As further justification for shuttering the industrial zone, the South Korean minister of unification, Hong Yong-pyo, also publicly stated on Feb. 10 that hard currency earned by the North Koreans through the Kaesong venture has been “wrongly harnessed” and used to fund Pyongyang’s nuclear and missile programs.

The Feb. 7 launch marked North Korea’s fifth firing  of a long-range rocket since 1998. U.S. officials contend that the launch is a cover for an effort to eventually develop and deploy a long-range missile capable of striking the United States. UN Security Council President Rafael Darío Ramírez Carreño of Venezuela referred to the Feb. 7 event as a “missile launch,” as did U.S. State Department spokesperson John Kirby in a Feb. 8 press briefing. Other experts, however, suggested that although the firing of the space launch vehicle had implications for ballistic missile development, North Korea might also have an interest in space development. In a recent analysis for 38 North, an online publication of the U.S.-Korea Institute at Johns Hopkins University, Michael Elleman of the International Institute for Strategic Studies suggested that the sequence of events in the North Korean rocket program does not comport with a program of research and development on an intercontinental ballistic missile (ICBM). No country has first developed space launch technology and then applied it to an ICBM program, he said. In the analysis, he explained that the large rockets North Korea has launched have been designed to perform as satellite launchers. Significant flight testing would also be required before North Korea could deploy a reliable ICBM, he wrote.

The rocket fired on Feb. 7 had three stages and was liquid fueled, making it similar to the Unha space launch vehicle that North Korea sent into space in 2012, Elleman said. According to a Feb. 20 story from Yonhap, the South Korean military has finished gathering debris from the launch and will assess it to gain data on Pyongyang’s capability. The final stage exploded into more than 270 pieces, possibly intentionally by North Korea, before landing in the Yellow Sea, the story said.

North Korea announced its impending test to the International Maritime Organization on Feb. 2 for the period of Feb. 8-25, but later shortened the anticipated launch period to Feb. 7-14.

North Korea watchers have been anticipating a rocket launch since North Korea undertook serious renovations at its Sohae satellite launch station at Tongchang-ri on the peninsula’s west coast. Renovations completed in 2015 included the installation of a covered launch tower and a movable warehouse, both of which serve to protect a space launch vehicle from the elements and to conceal launch preparations, according to analysts at 38 North. North Korean rockets are liquid fueled, meaning they must be fueled in place before launch, which is a slow and detectable process.

With the Feb. 7 launch, North Korea claims to have placed into orbit an earth observation satellite, the Kwangmyongsong-4. (Kwangmyongsong means “bright star.”) There is no public information indicating that the satellite is transmitting a signal back to Earth. According to a Yonhap report, South Korean intelligence has estimated that the Kwangmongsong-4 weighs 200 kilograms, twice as much as the satellite launched in 2012.

Pyongyang also claimed to have placed a satellite into orbit in 2012, but it is thought to have been a dummy satellite as there is no indication that it ever made contact with Earth.