“What's really strikes me about ACA is the potential to shape the next generation of leaders on arms control and nuclear policy. This is something I witnessed firsthand as someone who was introduced to the field through ACA.”
– Alicia Sanders-Zakre
ICAN
June 2, 2022
NPT Conference Fails to Reach Consensus 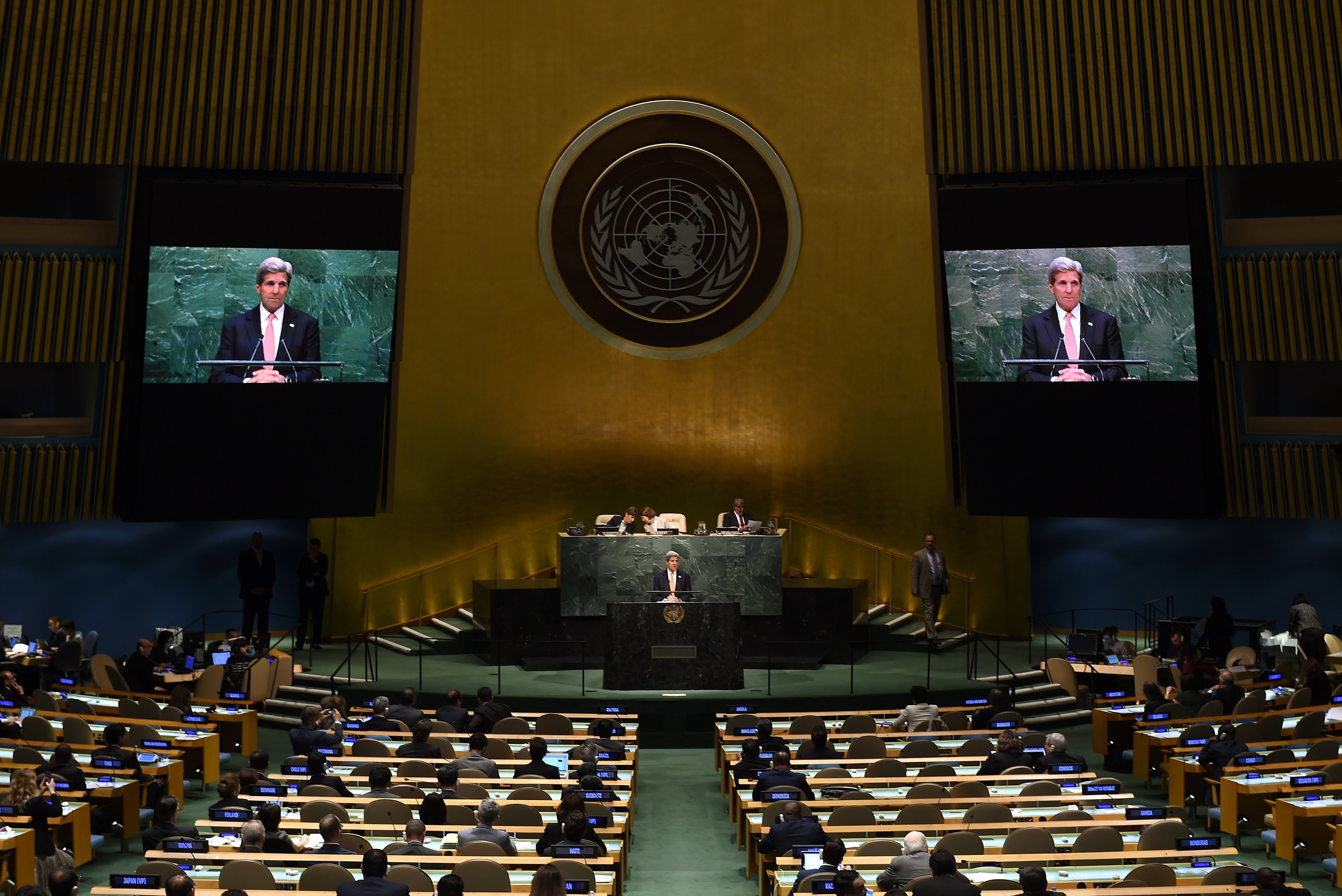 The 2015 Nuclear Nonproliferation Treaty (NPT) Review Conference ended on May 22 without agreement on a final document as key states-parties could not bridge differences over the process for convening a conference on ridding the Middle East of weapons of mass destruction (WMD) and clashed over the pace of the nuclear-weapon states’ disarmament efforts.

After nearly four weeks of at times acrimonious negotiations on a text designed to review the 1968 treaty and set benchmarks for future progress, Taous Feroukhi of Algeria, the conference president, presented a consolidated draft final document for possible adoption by consensus on the final day of the meeting.

But the representatives of Canada, the United Kingdom, and the United States announced late in the day on May 22 that the three countries could not support the formula presented in the document for pursuing a conference to discuss the Middle Eastern WMD-free zone.

“We were prepared to endorse consensus on all the other parts of the draft final document addressing the three pillars of the treaty—disarmament, nonproliferation, and the peaceful uses of nuclear energy,” said Rose Gottemoeller, U.S. undersecretary of state for arms control and international security. But the language on the Middle Eastern zone was “incompatible with our long-standing policies,” she said. (See, "Mideast Zone Plan Stymies NPT Meeting.")

Even if the issue of the conference on the WMD-free zone could have been resolved, differences on the disarmament issue may have led one or more states to block consensus.

Under Article VI of the treaty, the parties are to “pursue negotiations in good faith on effective measures relating to the cessation of the arms race at an early date and to nuclear disarmament.” At the last review conference, in 2010, the parties agreed to a final document that contained an “action plan” on disarmament.

The draft 2015 final conference document was sharply criticized by many non-nuclear-weapon states for failing to include new commitments and time-specific benchmarks designed to accelerate progress on that plan.

In a closing statement delivered on behalf of 49 states, Alexander Kmentt, director of disarmament, arms control, and nonproliferation in the Austrian Federal Ministry for European and International Affairs, said “there is a wide divide” on disarmament between the nuclear-weapon and non-nuclear-weapon states, “a reality gap, a credibility gap, a confidence gap, and a moral gap.”

As part of the 2010 plan, the five countries that the NPT recognizes as nuclear-weapon states—China, France, Russia, the UK, and the United States—pledged “to accelerate concrete progress on the steps leading to nuclear disarmament,” including reductions in “all types of nuclear weapons” and entry into force of the 1996 Comprehensive Test Ban Treaty (CTBT). (See ACT, June 2010.)

Since the New Strategic Arms Reduction Treaty (New START) entered into force in February 2011, however, further progress on disarmament has stalled in large part due to the severe downturn in U.S.-Russian relations. There has also been no visible action toward CTBT ratification by China, the United States, and other key countries.

The draft final document included noncommittal language regarding the pursuit of further nuclear weapons reductions between Russia and the United States beyond New START. The United States reiterated at the conference its willingness to negotiate further reductions in deployed strategic nuclear weapons by up to one-third below the New START level. But Russia argued that it has already reduced its arsenal to a minimum level and that U.S. policies, such as the development of a global missile defense system, are preventing further progress. (See ACT, May 2015.)

The draft document “encourage[d]” the two sides “to commence negotiations at an early date to achieve greater reductions in their stockpiles of nuclear weapons with a view to concluding such negotiations as soon as possible.”

Several non-nuclear-weapon states also pressed for action on the 2010 commitment to “promptly engage…to reduce the risk of accidental use of nuclear weapons,” including action to eliminate “prompt launch” nuclear postures. But the United States insisted that it had already taken all reasonable steps in this regard.

With the five nuclear-weapon states unwilling to make further disarmament commitments, frustration among many delegations grew as the conference wore on.

In a May 13 statement, Abdul Minty, deputy director-general of the South African Department of Foreign Affairs, asked, “When will we ever get disarmament?” South Africa, a key member of the Non-Aligned Movement, is the only NPT party to have given up its nuclear weapons.

In a May 18 statement, Kmentt expressed concern that successive drafts of the document were “getting weakened overall, in the face of an overwhelming majority calling for a strengthened document with clear obligations, concrete commitments, and timelines.”

In an effort to push the nuclear-armed states to accelerate the pace of progress on disarmament, a group of 159 countries endorsed a statement delivered by Austrian Foreign Minister Sebastian Kurz on April 28 citing the findings of three international conferences held since March 2013 on the impact of nuclear weapons use, the most recent of which was in Vienna last December. (See ACT, January/February 2015.) “The catastrophic effects of a nuclear weapon detonation, whether by accident, miscalculation or design, cannot be adequately addressed,” said the statement.

France and some of the other nuclear-weapon states were unmoved. France’s representative to the conference, Jean-Hugues Simon-Michel, the French ambassador to the Conference on Disarmament in Geneva, said on May 11 that the risks of the accidental use of nuclear weapons are overstated and that no new information on the humanitarian impact of nuclear weapons use had been uncovered for decades.

Nonetheless, the draft final document included more references to the humanitarian impact of nuclear weapons use than the 2010 document did.

In addition, as the conference drew to a close, a growing number of states endorsed a document known as the “Humanitarian Pledge,” which emerged from the Vienna conference in December. By the end of the review conference, 107 countries had joined the statement, which calls on states “to identify and pursue effective measures to fill the legal gap for the prohibition and elimination of nuclear weapons.”

But the next steps for the humanitarian initiative are uncertain, as even supporters of the initiative differ on what constitutes urgent and effective actions to fulfill the NPT’s Article VI disarmament goals.

When asked about the future of the humanitarian impact initiative at a May 14 conference hosted by the Arms Control Association in Washington, Kmentt answered, “At the moment, it’s not very clear what this is going to be.”

One new forum for discussions on disarmament could be an “open-ended working group”—a forum in which all UN members can participate—to be established by the UN General Assembly, which was a recommendation in the draft final NPT conference document. According to the document, the purpose of the working group would be “to identify effective measures for the full implementation of Article VI of the treaty.”