– George Stephanopolous
ABC News
January 1, 2005
Core Group of Negotiators for the Treaty on the Prohibition of Nuclear Weapons Voted "2017 Arms Control Persons of the Year"

(Washington, D.C.)—Diplomats from the disarmament delegations of Austria, Brazil, Ireland, Mexico, New Zealand, and South Africa, and Ambassador Elayne Whyte Gómez of Costa Rica received the highest number of votes in an online poll to determine the"2017 Arms Control Person(s) of the Year” in recognition of their efforts to secure the historic 2017 Treaty on the Prohibition of Nuclear Weapons. 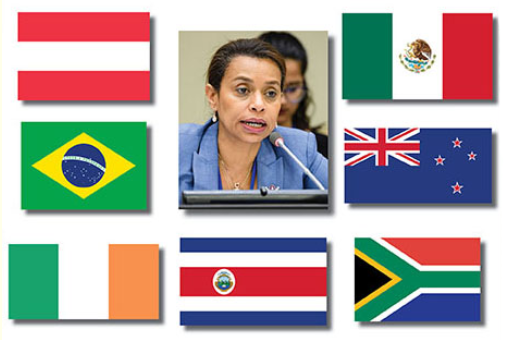 More than 2,500 individuals from over 90 countries voted in the contest, the highest number of votes from the widest range of countries in the 10-year history of the contest.

Nine individuals and groups were nominated by the staff and board of the Arms Control Association for their leadership in advancing effective arms control, nonproliferation, and disarmament solutions or for raising awareness of the threats posed by mass casualty weapons during the course of 2017.

The diplomats leading the disarmament delegations from Austria, Brazil, Ireland, Mexico, New Zealand, and South Africa were part of the “core group” of states who, along with the president of the negotiating conference, Ambassador Elayne Whyte Gómez of Costa Rica, played a central role in the multilateral talks on the Treaty on the Prohibition of Nuclear Weapons. The negotiations were brought to a successful conclusion in July and the treaty was opened for signature in September.

“In a year marked by rising tensions between the world’s nuclear-armed states, the negotiation of the Treaty on the Prohibition of Nuclear Weapons stands out as a historic achievement,” noted Daryl Kimball, executive director of the Arms Control Association.

"The strong affirmative vote for the disarmament teams from Austria, Brazil, Ireland, Mexico, New Zealand, and South Africa, and Ambassador Whyte Gómez, reflects their pivotal role in the negotiation of the treaty and the pursuit of a world without nuclear weapons,” Kimball said.

The runners-up in the vote for the 2017 Arms Control Persons of the Year were Toby Walsh of the University of New South Wales and a group of more than 137 founders and directors of over 100 robotics and artificial intelligence companies. They were nominated for their influential open letter warning of the dangers posed by uncontrolled development of lethal autonomous weapon systems (LAWS). Their efforts have helped push government delegations at the Convention on Certain Conventional Weapons in Geneva to consider options for regulating this new class of potentially destabilizing weapons.

The second runner-up was Pope Francis for his declaration that the possession of nuclear weapons is immoral completing the Catholic Church’s shift away from conditional acceptance of nuclear deterrence, and for his call for a more inclusive and effective process to advance disarmament. Pope Francis and the Vatican convened a major international conference Nov. 10-11 to discuss the steps toward a world without nuclear weapons.