(Washington, D.C.)—Today, members of the United Nations' disarmament and international security committee voted overwhelmingly in favor of a resolution to launch formal negotiations in 2017 on a “legally-binding instrument to prohibit nuclear weapons, leading towards their total elimination.” 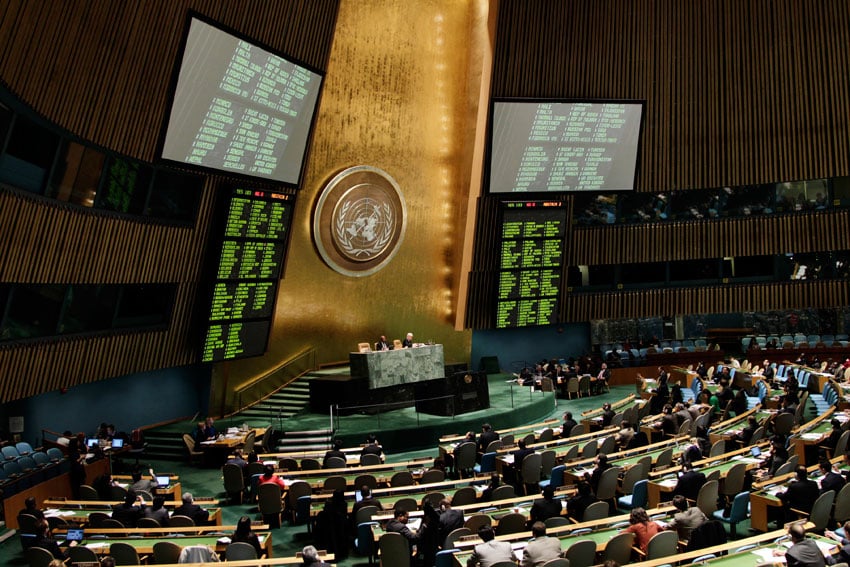 Sponsored by Austria, Brazil, Ireland, Mexico, Nigeria, and South Africa, the resolution (A/C.1/71/L.41) was approved by a vote of 123 to 38 with 16 abstentions. The United States and other nuclear-armed states voted against the resolution. The proposal will be considered and likely approved by the General Assembly in the coming weeks.

The resolution follows three international conferences in 2013 and 2014 to consider the humanitarian impact of nuclear weapons use and discussions by an open-ended working group on nuclear disarmament in 2016.

The following is a statement from Executive Director Daryl Kimball, on the initiative:

“Today’s vote marks a new phase in the decades-long struggle to eliminate the threats posed by nuclear weapons. In order to attain a world free of nuclear weapons, it will be necessary, at some point, to establish a legally-binding norm to prohibit such weapons. As such, the pursuit of a treaty banning the development, production, possession and use of nuclear weapons is a key step along the way.

Although the world’s nuclear-armed states will likely boycott the negotiations on a nuclear weapons ban, this unprecedented new process could help to further delegitimize nuclear weapons and strengthen the legal and political norm against their use—a worthy goal.

The strong support for negotiations on a ban treaty needs to be understood as a logical international response to the growing risks and catastrophic consequences of a conflict between nuclear-armed states, the accelerating global technological nuclear arms race, and underwhelming pace of progress by the world’s nine nuclear-armed states on nuclear disarmament in recent years.

The coming ban treaty negotiations are not a substitute for necessary, progressive steps on nuclear disarmament, but they do have the potential to strengthen the taboo against the further development and use of nuclear weapons. In the coming months and years, the non-nuclear-weapon states and nuclear-armed states—particularly the United States, Russia, China, India and Pakistan—can and should do more to overcome old obstacles and animosities to advance disarmament and nuclear risk reduction measures, which are essential if we are to avoid nuclear conflict.”