Authored by Heather Foye on September 6, 2022

The 10th Review Conference of the Parties to the Treaty on the Non-Proliferation of Nuclear Weapons (NPT) ended without consensus Aug. 26, 2022, after four weeks of contentious negotiations. Conference President Gustavo Zlauvinen of Argentina presented a consolidated 35-page draft final outcome document for adoption by consensus Aug. 25. But Russia decided to block consensus due to wording in paras 34 and 187.50 regarding nuclear safety matters at Ukraine’s Zaporizhzhia Nuclear Power Plant, which Russia has occupied since March 2022. 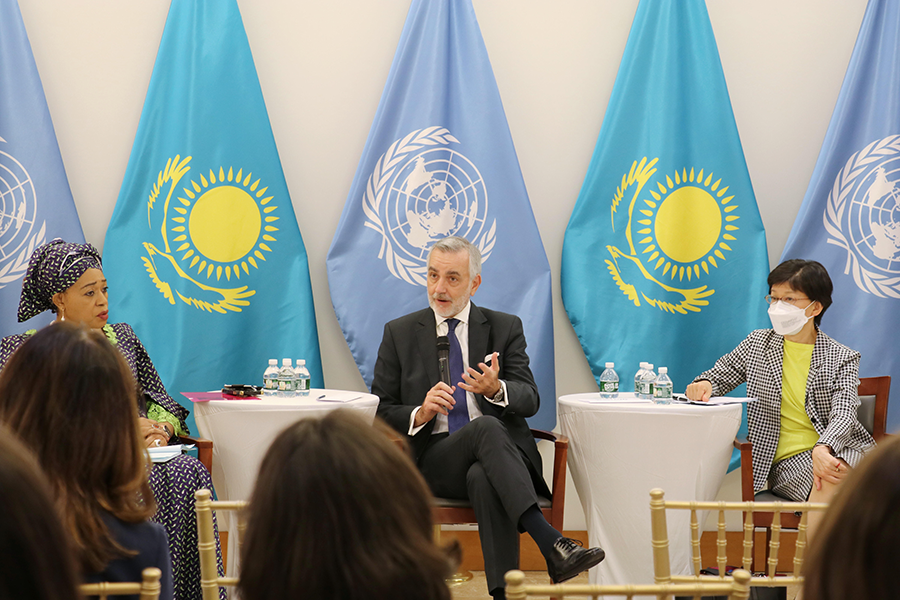 Many other states expressed disappointment about the lack of ambition, especially in the forward-looking section of the draft outcome document, but did not wish to block adoption. Despite the lack of a final outcome document, the NPT demonstrates the commitment of the global community to come together to address non-proliferation, disarmament, and the peaceful uses of nuclear energy, as over 150 states participated. On the final day of the conference, Aug. 26, almost 50 states delivered statements until nearly midnight to convey their reactions. Excerpted below are several key statements and takeaways.

Zlauvinen rationalized that while not a perfect document, the draft text aimed to be balanced and reconcile differences to ultimately achieve consensus. He stated the universal goal of states-parties was to “achieve a world without weapons, avoid dangerous regional conflicts and see the achievement of the Sustainable Development Goals.”

Russia, the sole state to oppose consensus, did so because of its “objections on key points which have a political dimension and are known to all.” The Russian delegation also deemed comments made throughout the conference to be “anti-Russian, politicized, unjustified and misleading on the situation in Ukraine.”

The European Union was prepared to join consensus on the document but recognized agreement in today’s security environment would be challenging given “Russia’s unacceptable aggression against Ukraine, affecting negatively all three pillars of the NPT.” The delegation expressed deep concern for the Russian occupation of the Zaporizhzhia Nuclear Power Plant and called for Russia to immediately withdraw troops from Ukraine.

The New Agenda Coalition (Brazil, Ireland, Mexico, New Zealand, Egypt, and South Africa) would have reluctantly supported an outcome document, despite their concerns about the lack of “transparency and accountability through timelines and benchmarks.” They also noted the discrepancy between the treatment that exists between biological and chemical weapons, and nuclear weapons. Biological and chemical weapons have been prohibited for decades, while “the lack of progress in nuclear disarmament continues to hold back the Treaty’s full implementation and increase the dangers for us all.”

France delivered a joint statement condemning Russian aggression in Ukraine as a violation of the United Nations Charter and international law, as well as a “betrayal of the security assurances…provided to Ukraine under the Budapest Memorandum of 1994 in connection with Ukraine’s accession to the NPT, as a Non-Nuclear Weapon State.”

China’s Foreign Ministry did not view the lack of an outcome document as a failure of the NPT, but rather the exchange of ideas as useful to survey ways to address nonproliferation. The delegation also applauded their approach to be “the most stable, consistent and responsible nuclear strategy and policy among the five nuclear-weapon states.” China also reaffirmed its opposition to placing geopolitics above non-proliferation and noted its support for cooperation to peacefully use nuclear energy.

The U.S. noted Russia was alone in blocking consensus of the text, and that Russia’s actions in Ukraine compromised all three pillars of the NPT, putting “Europe, Ukraine, and its own people at risk of a radiological disaster.” They also committed to pursue actionable arms control and disarmament measures, including supporting the work of the International Atomic Energy Agency (IAEA), condemning North Korean nuclear tests, and “affirming our commitments to the highest standards of nonproliferation and safeguards.”

The 66 states who have ratified the Treaty on the Prohibition of Nuclear Weapons (TPNW) acknowledged that both the NPT and TPNW took place at a critical time, “when the risk of the use of nuclear weapons is high, and the possibility of the catastrophic humanitarian impact of nuclear weapons is looming ominously over us.” They also reaffirmed their commitment to nonproliferation and disarmament by encouraging all states to join the TPNW, until “the last warhead has been irreversibly dismantled and destroyed and nuclear weapons have been totally eliminated from the Earth.”

Sri Lanka explained the NPT wasn’t perfect but provided an enduring legal framework for nuclear non-proliferation. The delegation quoted President Joe Biden’s remarks at the Arms Control Association Annual Dinner in 1979, “pursuing arms control is not a luxury or a sign of weakness, but an international responsibility and a national necessity.” They also hoped nuclear weapon states would take concrete steps, such as Russia and the U.S. resuming talks on New START, to reduce nuclear warheads.

The United Kingdom noted Russia could block consensus on the final document, but could not hide from the “world’s revulsion at their actions.”

Japan reaffirmed the NPT as the foundation of nuclear non-proliferation and disarmament, and that strengthening its tenets was the only path forward for a world free of nuclear weapons. Following the conference, Japan committed to work collectively with the international community “to realize a world without nuclear weapons through discussions including those at the G7 Summit in Hiroshima next year.”

Ukraine tweeted that the “#NPTRevCon is yet another proof that Russia as is can’t be a responsible member of the international community.”

Kazakhstan and Kiribati noted their countries have suffered from nuclear testing. Therefore, their delegations were disappointed by the lack of an outcome document, which would have included “strong language encouraging increased attention to the people and communities affected by nuclear weapons use and testing and environmental remediation.” They also called on nuclear weapon states to fulfill their legal obligations under Article VI of the treaty and to provide negative security assurances to non-nuclear weapon states.

The NPT failed to deliver a consensus final document, which is not too surprising given today’s polarized global stage with Russia’s invasion of Ukraine. However, states in their takeaway statements overall recognized the success of the conference as an opportunity to bring the international community together to discuss nuclear nonproliferation issues, which, ultimately, impact all of humanity. As the U.S. delegation stated, the month of NPT negotiations ultimately proved, “while we still have much work to do, we do agree on more than we disagree.”

More information on the outcome of the 2022 NPT conference can be found in the September issue of Arms Control Today.