Authored by Shannon Bugos on October 7, 2019

In the midst of this year’s United Nations General Assembly meeting in New York City on Sept. 25, ministers of foreign affairs and diplomats representing nearly 50 countries spoke at a biannual conference in favor of entry into force of the Comprehensive Test Ban Treaty (CTBT) signed by 184 countries.

Signed in 1996, the CTBT prohibits “any nuclear weapon test explosion or any nuclear explosion” no matter what the yield, anywhere in the world. According to Article XIV of the treaty, the agreement cannot enter into force until it has been both signed and ratified by the 44 countries listed in Annex 2. Until such a time, Article XIV calls for a conference every two years, so that countries can continue to express support for the nuclear testing ban.

Since the last Article XIV conference in 2017, two countries have ratified the CTBT—Thailand in September 2018 and Zimbabwe in February 2019—while another, Tuvalu, signed it in September 2018. In total, there are now 168 ratifications and 184 signatures. Yet, the treaty cannot enter into force until the eight remaining Annex 2 states—China, Egypt, India, Iran, Israel, North Korea, Pakistan, and the United States—deposit their instruments of ratification. 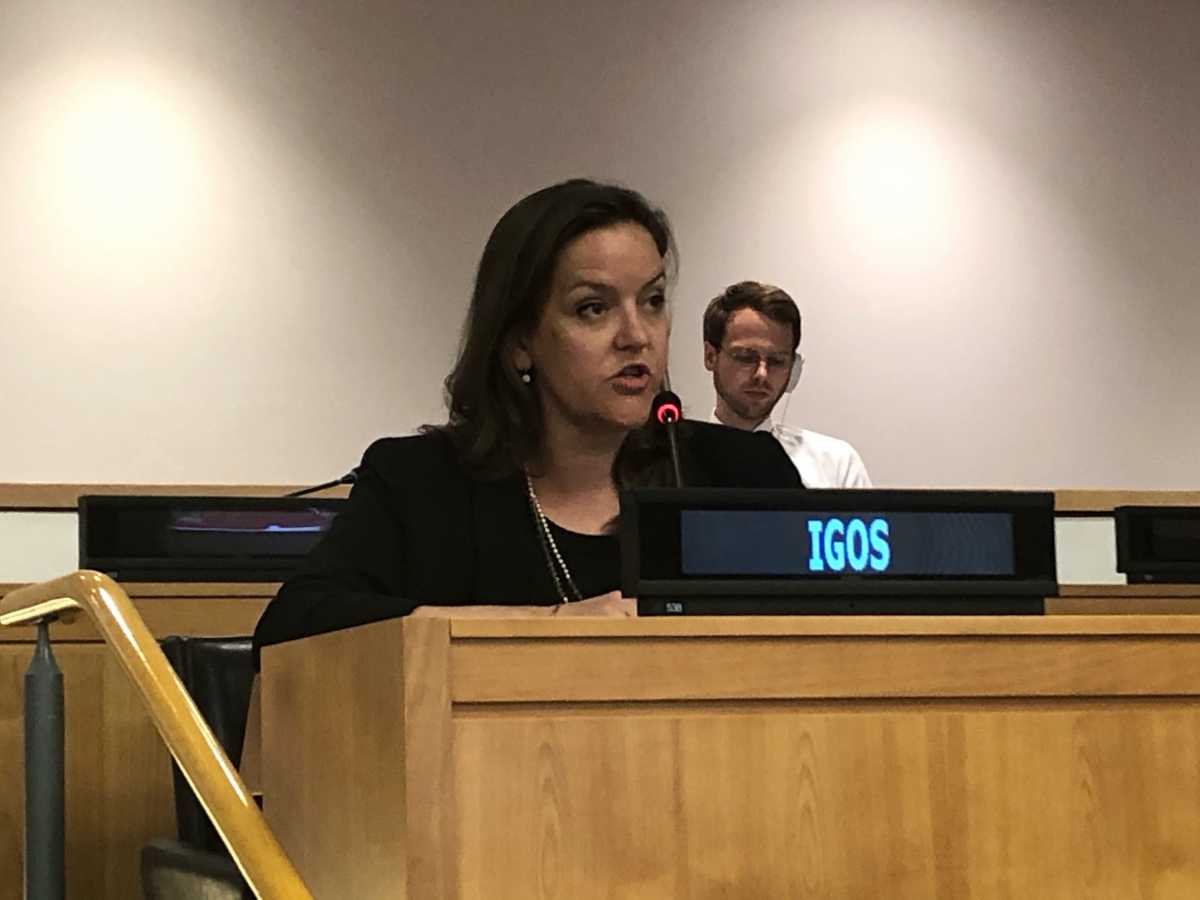 This year’s conference opened with remarks by Izumi Nakamitsu, undersecretary and high representative for disarmament affairs at the United Nations, who said unequivocally that there is “no substitute for the Comprehensive Nuclear Test Ban Treaty.” Nakamitsu further declared that the entry into force of the CTBT “must be a priority”—a call that the 50 present member-states, as well as the European Union and a group of more than 40 leaders from civil society, echoed in their own statements.

In urging all states to ratify the CTBT, Germany’s Foreign Minister Heiko Maas, a co-president of the conference, called nuclear testing “a grave threat to international peace and security.” Meanwhile, the other co-president, Algerian Foreign Minister Sabri Boukadoum called the treaty “a triumph” of international diplomacy that must be ratified by all parties who have not yet done so “as soon as possible.”

Another key point of emphasis by many of the countries present was the importance of the Preparatory Commission for the Comprehensive Nuclear Test Ban Treaty Organization (CTBTO), founded in 1996 in order to promote the treaty and prepare for the CTBT’s entry into force. In his statement, Lassina Zerbo, executive secretary of the CTBTO, highlighted the organization’s achievements, specifically in regard to the International Monitoring System (IMS) and the International Data Center (IDC).

The IMS constantly monitors for any signs of nuclear explosions and sends information to the IDC at the CTBTO’s headquarters in Vienna. The IDC processes this data—which is cultivated using seismic, hydroacoustic, infrasound, and radionuclide technologies—and then distributes it to the member-states. Currently, according to Zerbo, the data are “shared with 1,300 institutions in 130 countries.”

The IMS is nearing completion and, when finished, will consist of 337 facilities worldwide. “The progressive buildup of the [IMS],” Zerbo said, “has resulted in a level of maturity, readiness, and relevance that has been demonstrated on numerous occasions and in a variety of circumstances.”

Federica Mogherini, the high representative of the European Union for foreign affairs and security policy, lauded the CTBTO, saying, “The Organization has provided the world with a truly global, high-tech monitoring system for nuclear explosions—something that no single country could do.”

These expressions of support for the treaty and its implementing body come about two months after an explosion off the coast of Russia that may have involved Moscow’s development of a new nuclear-powered, long-range cruise missile. Two days after the incident, the CTBTO reported that some stations in Russia began to halt transmissions of data. By Aug. 13, five of the seven radionuclide stations in Russia had gone silent, though when two came back online a week later, they backfilled information.

In their statement, more than 40 nongovernmental leaders in nuclear nonproliferation and disarmament, as well as former government officials and diplomats, alluded to the halt in data transmissions, saying, “Withholding the flow of IMS data prior to the CTBT’s entry into force, for whatever reason—whether to send a political message or try to hide information relevant to the protection of public health and safety following a nuclear incident—is irresponsible.” 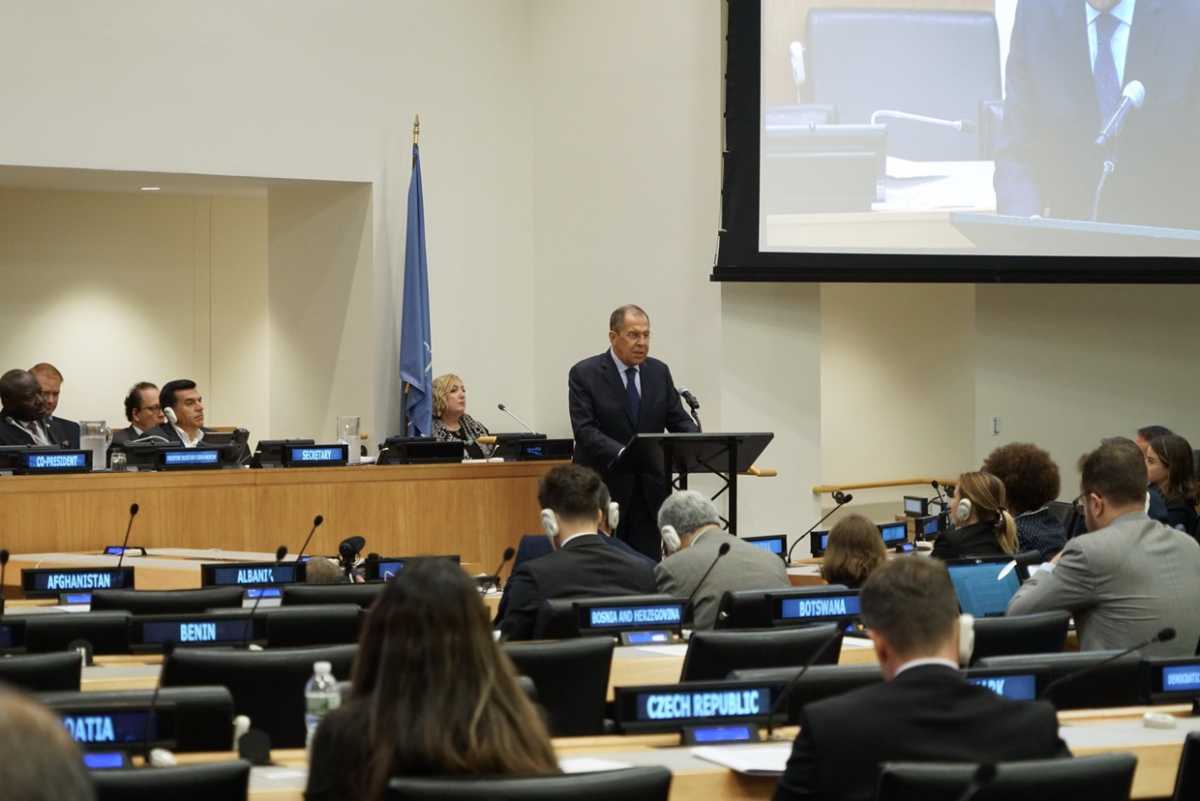 Russian Foreign Minister Sergey Lavrov did not discuss this incident during his remarks at the conference. Rather, Lavrov denounced the United States for failing to “fulfill its commitments on the timely issuance of visas” for members of a Russian delegation traveling to the United Nations. Lavrov suggested that future Article XIV conferences be moved “from New York to more stable venues where the host country treats its commitments responsibly.” At the end of the conference, Moscow insisted that language reflecting this suggestion be included in the conference’s final declaration.

Lavrov also criticized the United States—which was not present at the conference—for failing to ratify the CTBT, calling this “the main destabilizing event.” Lavrov additionally reiterated Russia’s observance of the global moratorium on nuclear testing, but only so long as “other nuclear states follow the same line.” He emphasized that Russia, which ratified the CTBT in 2000, has “not staged a single nuclear explosion” since observing the moratorium in 1991. These remarks likely allude to the statement made by the U.S. Director of the Defense Intelligence Agency, Lt. Gen. Robert Ashley, in May that “Russia probably is not adhering to its nuclear testing moratorium in a manner consistent with the ‘zero-yield’ standard outlined” in the CTBT. Yet, the United States has yet to provide any credible information to back up that statement.

U.S.-Russian arms control relations under the Trump administration have become increasingly tense, especially since the U.S. withdrawal from the Intermediate-Range Nuclear Forces (INF) Treaty on Aug. 2. During the International Day for the Total Elimination of Nuclear Weapons on Sept. 26, Antonio Guterres, UN secretary-general, lamented the end of the INF Treaty, saying that “the world lost an invaluable brake on nuclear war.”

Guterres, alongside the countries of Austria and South Africa, also called for the extension of the New Strategic Arms Reduction Treaty (New START), which is now the only treaty limiting the world’s two largest nuclear arsenals. New START can be extended by up to five years, until 2026, by mutual agreement of the U.S. and Russian presidents. Guterres said that extending the treaty is crucial in order “to provide stability and the time to negotiate future arms control measures.”

'A Blow' to Efforts to Reduce Nuclear Risks