“[My time at ACA] prepared me very well for the position that I took following that with the State Department, where I then implemented and helped to implement many of the policies that we tried to promote.”
– Peter Crail
Business Executive for National Security
June 2, 2022
U.S. Completes INF Treaty Withdrawal

Less than one year after President Donald Trump informally announced that the United States would withdraw from the 1987 Intermediate-Range Nuclear Forces (INF) Treaty, the State Department announced on Aug. 2 that the move was officially complete. The treaty’s death leaves just the 2010 New Strategic Arms Reduction Treaty (New START) in place to limit U.S. and Russian nuclear weapons deployments, and that pact is due to expire in February 2021. 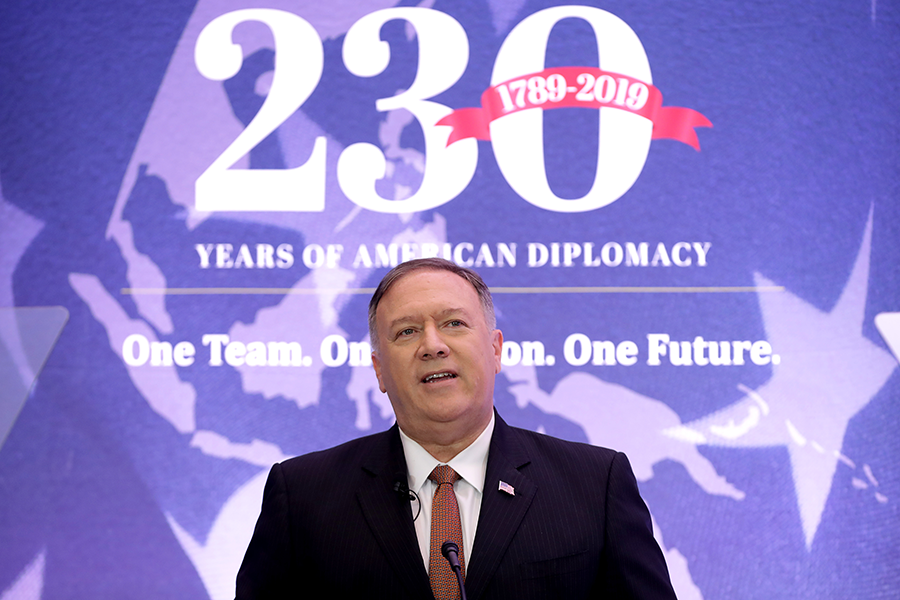 For several years, the United States has alleged that Russia was in violation of the INF Treaty by testing and deploying a banned missile system, and Washington pinned its treaty withdrawal squarely on Russia. “Russia is solely responsible for the treaty’s demise,” said Secretary of State Mike Pompeo in announcing the U.S. move. “Over the past six months, the United States provided Russia a final opportunity to correct its noncompliance. As it has for many years, Russia chose to keep its noncompliant missile rather than going back into compliance with its treaty obligations.”

Russia and China strongly criticized the Trump administration’s action and sought to blame the United States for the end of the treaty. “Instead of engaging in a meaningful discussion on international security matters, the United States opted for simply undercutting many years of efforts to reduce the probability of a large-scale armed conflict, including the use of nuclear weapons,” Russian President Vladimir Putin said in an Aug. 5 statement. He added that Moscow will mirror the development of any missiles that the United States makes.

Similarly, Chinese Foreign Ministry spokesperson Hua Chunying said on Aug. 2 that “[w]ithdrawing from the INF Treaty is another negative move of the U.S. that ignores its international commitment and pursues unilateralism. Its real intention is to make the treaty no longer binding on itself so that it can unilaterally seek military and strategic edge.”

For its part, NATO supported the U.S. decision, saying in a statement that “a situation whereby the United States fully abides by the treaty, and Russia does not, is not sustainable.” German Foreign Minister Heiko Maas, however, lamented the end of the treaty, saying that “a piece of Europe’s security has been lost.”

Signed in 1987, the INF Treaty led to the elimination of 2,692 U.S. and Soviet nuclear and conventional ground-launched ballistic and cruise missiles with ranges between 500 and 5,500 kilometers. Since 2014, the United States has accused Russia of violating the treaty by testing, possessing, and fielding an illegal ground-launched cruise missile (GLCM), known as the 9M729. (See ACT, September 2014.)

In October 2018, on the sidelines of a campaign rally, Trump stated that he planned to “terminate” the INF Treaty. Since then, U.S. and Russian officials held only a few unsuccessful meetings to discuss the treaty.

Pompeo announced on Feb. 2 that the Trump administration would suspend its obligations under the treaty and withdraw from agreement in six months if Russia did not return to full compliance. When formally withdrawing on Aug. 2, Pompeo argued that “Russia’s noncompliance under the treaty jeopardizes U.S. supreme interests as Russia’s development and fielding of a treaty-violating missile system represents a direct threat to the United States and our allies and partners.”

Trump echoed that statement in Aug. 2 comments, saying that “if [Russia is] not going to live up to their commitment, then we have to—we always have to be in the lead.” The White House previously also cited concerns about the intermediate-range missile arsenal of China, which is not party to the treaty and has deployed large numbers of missiles with ranges that Washington and Moscow were long prohibited from deploying.

Attention has now shifted to how the United States and NATO should approach a world without the agreement. The Defense Department has requested nearly $100 million in fiscal year 2020 to develop three new missile systems that would exceed the range limits of the treaty.

“Sooner rather [than] later, we want to develop this capability and [make] sure we can have long-range precision fires, not just for [Europe], but for the theater that we’re deploying to as well, because of the importance of great distances we need to cover, and how important an intermediate-range conventional weapon would be to the [Pacific Command] theater,” said Defense Secretary Mark Esper on Aug. 2.

The Pentagon conducted the first test of one of these systems Aug. 18, when it fired a GLCM from San Nicolas Island, off the coast of California, to a target more than 500 kilometers away, according to an official statement. A test of an intermediate-range ballistic missile is expected in November.

With limited time remaining, New START could be extended for up to five years by agreement of the U.S. and Russian presidents. The treaty caps U.S. and Russian deployments of strategic nuclear warheads at 1,550 and intercontinental ballistic missiles, submarine-launched ballistic missiles, and heavy bombers at 700. The treaty also has a comprehensive verification regime, including on-site inspections and routine data exchanges. (See ACT, January/February 2019.)

If New START does expire with nothing to replace it, there will be no legally binding limits on the world’s two largest nuclear arsenals for the first time in nearly half a century.