The eleventh U.S.-Russian biannual data exchange under the New Strategic Arms Reduction Treaty (New START) shows a mixed measure of progress toward keeping under the treaty’s February 2018 ceilings.  Five of the six numbers are below or trending toward those ceilings. But Russia moved upward above the ceiling in operationally deployed warheads for the second consecutive time as the U.S. warhead count continued to fall.

While disappointing in the signals it sends, the bump-up in Russia’s current warhead aggregate is neither militarily significant, nor necessarily indicative of an intent to evade the treaty’s limits when they become binding in February 2018. Instead it signals Moscow’s particular political sensitivity about being perceived as anything less than the military equal of the United States. 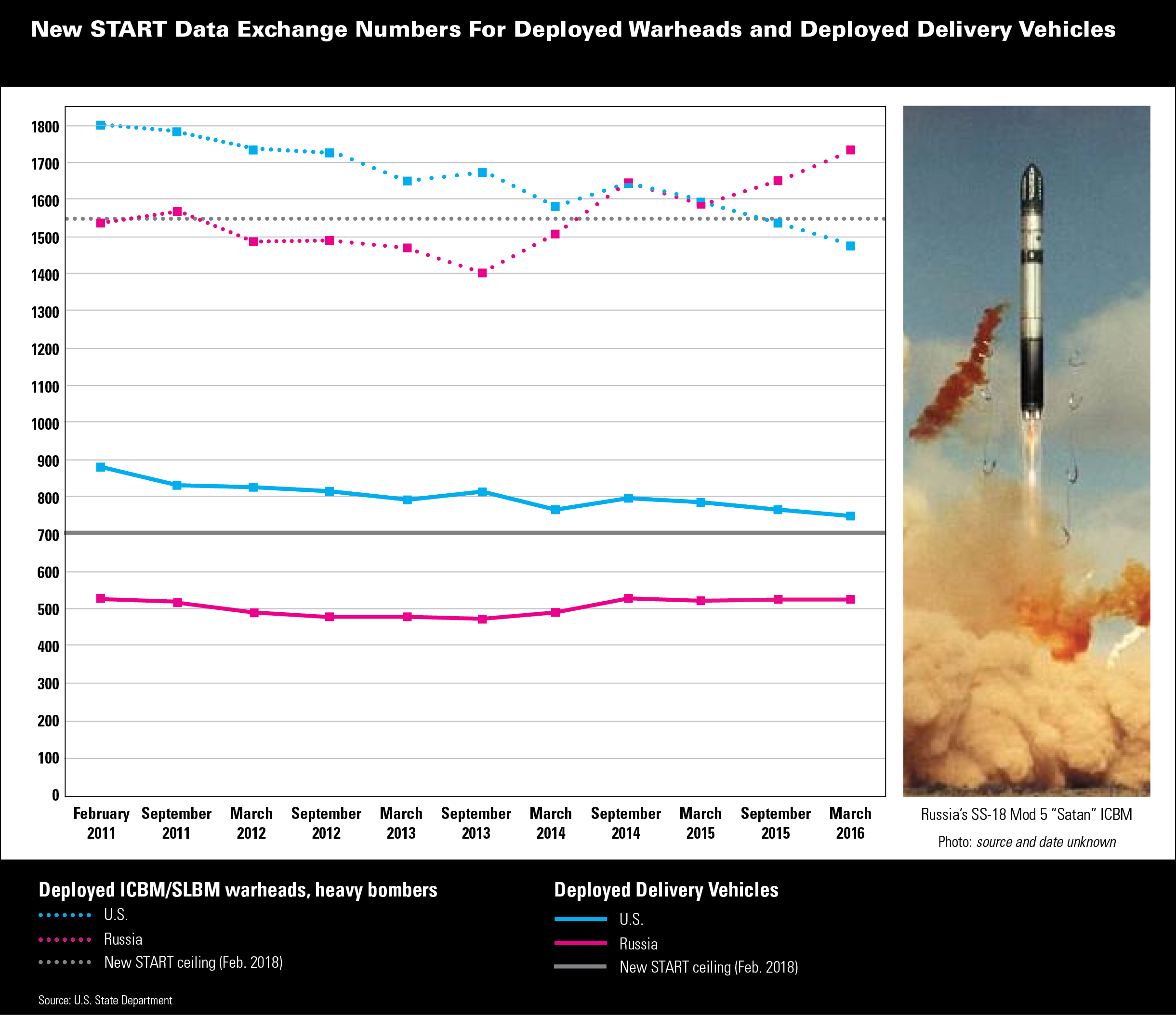 During the last biannual period (from Sept. 1, 2015 to Mar. 1, 2016), the United States reduced the number of deployed strategic delivery vehicles from 762 to 741, but remained above the treaty ceiling of 700. The Russian count fell slightly from 526 to 521, still far below the ceiling.

U.S. deployed and non-deployed strategic ballistic missile launchers and heavy bombers fell from 898 to 878, still above the treaty ceiling of 800. The Russian count in this category fell from 877 to 856, also remaining above the ceiling.

The trend lines diverged in only one of the three categories—“warheads on deployed strategic ballistic missiles and nuclear warheads counted for deployed heavy bombers.” The U.S. total in this category fell from 1,538 to 1,481. The Russian count rose from 1,648 to 1,735. This left the world’s two largest nuclear powers 254 warheads apart and on different sides of the treaty’s February 2018 ceiling of 1,550 warheads.

Russia’s temporary “superiority” in warheads is a reflection of the fact that it is maintaining nearly 600 warheads on its liquid-fueled, 10-warhead SS-18 Satan intercontinental ballistic missiles (ICBMs) and 6-warhead SS-19 Stiletto ICBMs as it also begins to deploy modern, solid-fueled SS-27 Mod 2 (Yars) ICBMs, each carrying 3-4 warheads.

The SS-18 and SS-19 systems are of Cold-War vintage, designed more than 30 years ago, and both well past their anticipated shelf lives. But Moscow apparently deems it necessary to replace these missiles' warheads one-to-one by deploying a new liquid-fueled, heavy ICBM, the Sarmat, in order to sustain current warhead levels. At the end of the day, the 10-warhead Sarmat will be no less vulnerable to attack than the systems it replaces. In fact, as a fixed site system with multiple independently targetable reentry vehicles, it will invite preemptive attack during a period of crisis.

Deploying the Sarmat heavy ICBM quickly enough to maintain Russian strategic forces at the New START warheads ceiling level will be challenging. Because of the current strains between Moscow and Kyiv, Russia cannot utilize the engineers and physical plant of the Ukrainian facility where the missile’s forebears were manufactured. And Moscow has significantly less revenue to draw on because of the fall in oil prices and the effects of Western sanctions. The first flight-test of the Sarmat is scheduled for the summer of 2016. Whether the 2018-2026 timeframe for deployments can be maintained and whether the retirement schedule for the older systems (to be completed by 2020) can be further extended are open questions.

Behind the trends in warhead and delivery vehicle aggregates are some important structural shifts. Russia is continuing to move toward more survivable basing modes for its ballistic missiles, with over half of them (more than 250) either submarine-based or road-mobile. Along with Russia’s continuing efforts to improve its ability to defeat strategic missile defenses, its increasing commitment to mobile basing modes assures a credible second-strike capability against any adversary.

At the same time, commitment to replace obsolescent heavy missiles with new heavy missiles at the same fixed-sites allows adversaries to maintain the ability to destroy a large number of Russian warheads with a single incoming warhead. Such vulnerability intensifies pressures to maintain “hair trigger” launch postures, increasing systemic instability.

The data exchange is one of the ways New START enhances the transparency of U.S. and Russian strategic forces—perhaps the treaty’s greatest virtue. By raising the accuracy and confidence levels of the sides’ threat assessments, the numerous information exchanges,  on-site inspections, and use of the treaty’s compliance resolution mechanism keep in check the improbable worst-case estimates, which have fueled arms races in the past.

Of course, the six numbers in the New START data exchange do not capture the entire picture needed to assess the strategic balance. The numbers do not reflect the benefits the United States enjoys from its alliances, its geographic position, and the technological superiority of the air- and sea-based legs of its deterrent. The numbers depict neither the multiplicative impact of bomber payload such as cruise missiles, nor the fact that previous down-loading of warheads gives the United States greater ability to upload warheads on existing delivery systems during a period of sustained crisis.

Getting lost in the numbers also risks succumbing to the illusion that the 1001st (or even the 101st) nuclear warhead has any political-military utility in the real world. As valuable as New START is, the treaty limits leave in place hugely excessive arsenals on each side, as reflected in President’s Obama’s determination in 2013 that one-third additional cuts in strategic forces could be safely achieved without damaging U.S. security.

Russia’s numerical “advantage” over the United States of 254 nuclear warheads on ballistic missiles and heavy bombers represents more weapons than fielded by any individual country among five of the world’s nine nuclear weapons states. And yet it would have no decisive strategic consequence for the U.S.-Russian balance. As a U.S. Intelligence Community/Defense Department study in 2012 concluded that even the deployment of Russian strategic warheads significantly above New START levels "would have little to no effects on the U.S. assured second-strike capabilities."

Reaching this conclusion may be one of the most valuable lessons drawn from examining the March 1, 2016 New START data exchange numbers. It speaks eloquently to the current glut in nuclear weaponry and the opportunity to achieve far deeper and more comprehensive reductions in future nuclear arms control negotiations.