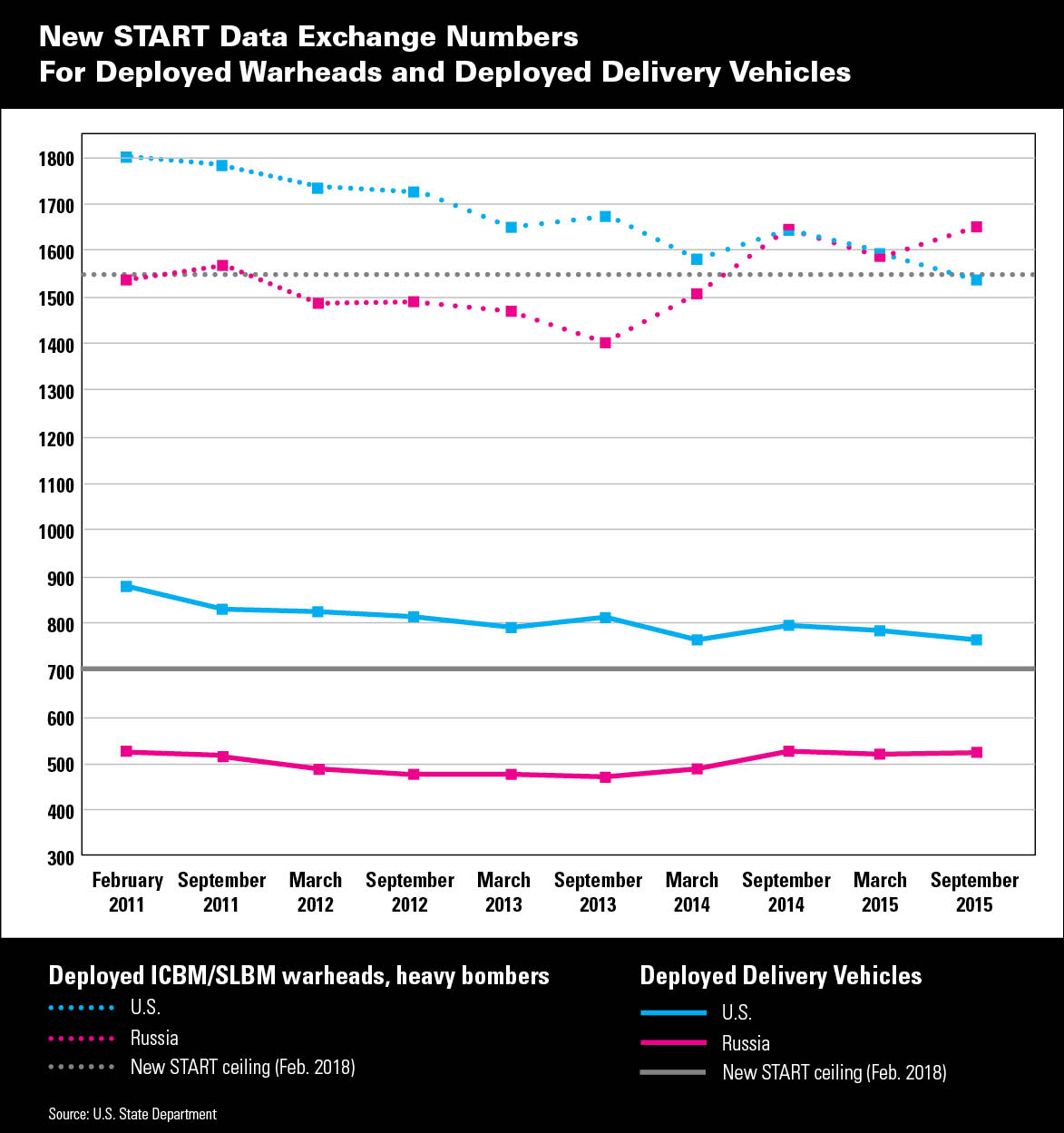 Charting the data exchanged under the New Strategic Arms Reduction Treaty (New START) between Russia and the United States from February 2011 to September 2015 shows that Russia reversed course two years ago and began increasing the number of warheads deployed on long-range ballistic missiles. Russia has now exceeded the treaty limit of 1,550 deployed strategic warheads in each of the last three data exchanges, which occur twice per year. The treaty requires that the ceilings be met by February 2018.

The U.S. trajectory for New START-accountable deployed strategic warheads, meanwhile, continues to point downward, with the latest count dipping below the treaty’s deployed warhead ceiling for the first time. Yet the takeaway from viewing these trend lines extends beyond this simple narrative.

As a tool of arms control verification, data exchanges constitute a lens for transparency and a validator of information acquired via other means.  As such, they provide a graphic reminder of the benefits to be achieved through verifiable arms control agreements. Regular on-site inspections of each other’s strategic forces increase confidence in the reliability of data exchanged. Analyzing reliable data can avoid consequential mistakes like the missile and bomber “gaps” assessments of the U.S. intelligence community at the end of the 1950s. And it can make less likely that one side will seek to gain advantage by conducting secret, destabilizing activities such as the Soviet Union’s deployment of nuclear missiles to Cuba.

It is important to understand that data exchanges are “snapshots” rather than moving pictures. For example, a ballistic missile submarine going temporarily off-line for overhaul or back on patrol after overhaul can result in dramatic fluctuations in the biannual counts of deployed warheads, even though there may be no change in underlying force levels.

In the broadest sense, there is no change in the fundamentals underlying nuclear force trends since New START was signed in 2010. Both sides are modernizing their nuclear arsenals, and are hovering around the core treaty limitation on deployed warheads.

But the modernization chronologies for the two countries are different. Russia is saddled with the need to catch up from the lean years of the 1990s. The only way it can avoid a dip in deployed warheads is to repeatedly extend the service lives of missiles and submarines, whether or not it makes financial or technical sense.

Many of us expected Russia to remain below the New START warheads ceiling as the 2018 deadline grew closer and to be receptive to arms control initiatives that would lead to equality at lower levels in the future. However, Russian President Vladimir Putin has so far decided for political reasons to keep the warhead count high. The number hasfluctuated since 2011, moving first below and then above the 1,550 warheads limit.

Russia’s delivery vehicle count has stayed well below the 2018 ceiling of 700, reflecting the greater concentration of Russian warheads on large intercontinental ballistic missiles (ICBMs), each armed with 6-10  multiple independently targetable reentry vehicles (MIRVs). Russia’s movement toward the deployed and non-deployed missile launchers and bombers limit of 800 is slow, due in part to the treaty’s demanding requirements for  system elimination.

The United States has been gradually and methodically reducing its forces to meet the treaty’s 2018 limits on warheads, delivery vehicles and launchers.

In light of the shelf-life of these systems and the time required to fully modernize them, there is good reason to believe Moscow and Washington will conform to the New START ceilings by February 2018, and continue abiding by them through the treaty’s expiration date in 2021.

The still enormous current and projected force levels of Russia and the United States means that each side will retain the ability to deter nuclear attack by posing an existential threat to the other.

The sea- and air-based legs of Russia’s triad are less technically advanced and more vulnerable to attack than their U.S. counterparts and the United States has more warheads in reserve that could be uploaded. But the enormous size and diversity of the arsenals on both sides precludes any realistic fear that a first-strike would be feasible in the foreseeable future.

In fact, its important to recall that President Barack Obama in consultation with the Joint Chiefs of Staff determined in early 2013 that the United States deploys about one-third more strategic nuclear weapons than is necessary for U.S. deterrence “requirements.”

The Extension of Politics by Other Means

But the strategic warhead and delivery vehicle counts are also seen as politically symbolic—evidence of good faith movement toward the ultimate disarmament objectives both sides have pledged to pursue and warnings to potential adversaries of the fearsome means of power Washington and Moscow have at their disposal.

Nuclear weapons force structure has long been heavily shaped by political factors, perceptions, and prestige rather than solely by military considerations. Not surprisingly, the latest New START data exchange will provide fodder for political messaging in Washington and Moscow. Certain reminders are therefore in order.

In the weapons category that most closely approximates destructive power, deployed warheads and heavy bombers, the United States total of 1,538 has fallen 59 since the last data exchange on March 1. Russia’s total of 1,648 has risen by 66. This latest snapshot shows, for the first time since the treaty entered into effect, that the United States is now below the deployed warhead level mandated for February 2018.

Meeting the New START goal for deployed warheads and bombers 30 months ahead of time would be a positive addition to the nuclear disarmament resume of the United States—if Obama is willing to exploit and enforce it. He could announce to the world that the United States had accelerated its reductions in the most significant of the treaty’s three limitation categories; he could parry inevitable objections from the Republican Congress by citing his executive authority in implementing an agreement that had already been constitutionally ratified. But unless he does so (and ensures that U.S. forces remain under this limit), there is no guarantee that subsequent exchanges will catch the U.S. once again in excess of the limit.

Little public attention has been focused on the two other weapons categories. U.S. strategic nuclear delivery vehicles have fallen by 23 to 762 from the March 1 count; Russia has added 11 since March, reaching 526 as of the September exchange. The number of U.S. deployed and non-deployed strategic missile launchers and bombers stayed the same at 898.  Russia’s total decreased 13 to 877.

Pressure to maintain Russia’s nuclear arsenal at its current level and match U.S. warhead totals is more political than military. Putin provided strong evidence of this in a recent interview by American television journalist Charlie Rose. Responding to Rose’s assertion that Russia “was in part a major power because of the nuclear weapons it has,” Putin said: “I definitely hope so. Otherwise, why do we have nuclear weapons at all?"

“Moscow considers it of utmost importance to maintain the current balance in strategic offensive weapons with the United States because this area is the last attribute of Russia’s superpower status,” according to Vladimir Dvorkin of the Carnegie Moscow Center. Russia appears, therefore, to be doing everything possible to slow down the retirement of older Cold War strategic weapons as it waits on new systems to be deployed. 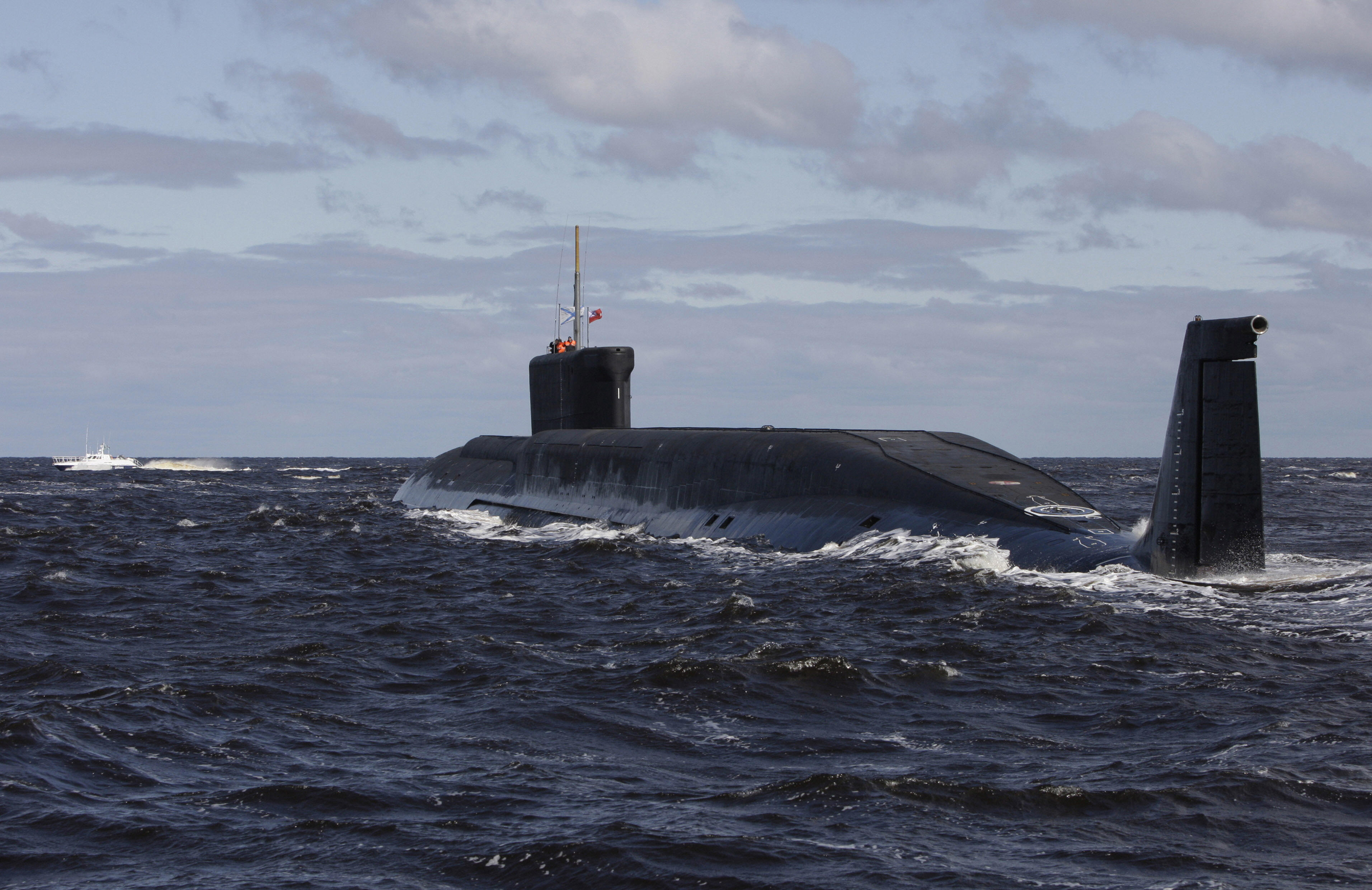 To project the appearance of equality and to avoid the perception of weakness, Russia is also taking pains to prolong the life of older weapons, like the SS-18 and SS-19 ICBMs and the SS-N-18 submarine-launched ballistic missiles (SLBMs) deployed on Delta III missile submarines. The marginal military utility of such high warhead numbers is dubious and keeping these older systems past their prime is costly, but elevating the aggregate weapons count likely serves Putin’s political goals.

While Washington’s most significant New START task is to reduce its deployed delivery vehicles and its deployed and non-deployed missile launchers sufficiently to fall below the treaty limits, Moscow is straining to keep its deployed strategic ballistic missile warheads and heavy bombers near the limits.

The United States relies more on its relatively invulnerable ballistic missile submarine force and Russia is relies more on its ICBMs. With Russia’s announced intention to develop and deploy a new silo-based heavy ICBM, the Sarmat, that can carry up to 10 warheads, Moscow is building a future force structure with a significant number of high value targets, vulnerable to a first-strike—an unfortunate, destabilizing trend, according to classic thinking about nuclear stability.

The table for productive negotiations to replace New START limits has been set by Obama’s call in a 2013 Berlin speech for negotiating an additional one-third cut in strategic forces. Moreover, the validation by senior U.S. military leaders that cuts of this magnitude would not endanger U.S. security implies political flexibility on finding the means to achieve them.

That Putin has not yet engaged with Obama on his offer should not discourage additional overtures by the United States. With both sides facing enormous costs to modernize all three legs of their nuclear triads, both have a huge financial incentive to reduce the size of their respective arsenals. This is especially true with regard to the much more financially stressed Russian economy.

Given the continuing likelihood that neither side will pose a plausible disarming first-strike threat to the other and that no third-country will approach them in numbers of nuclear weapons during the foreseeable future, there should be ample opportunity for negotiating another significant U.S.-Russian reduction beyond the levels to be achieved by New START.

Challenging Russia to match early achievement of reductions down to the New START limit on deployed warheads by the United States would be a good opening gambit. Washington could then offer to take a substantial number of additional deployed warheads offline if, as predicted, Russian totals fall below the New START limits toward the end of the decade.

Given the Iran nuclear deal’s reduction in the potential strategic threat from Iran, and the considerable work needed to improve the sensors and kill vehicles needed to effectively employ the 44 strategic missile defense interceptors in Alaska and California already programed, the United States could afford to offer a moratorium on the deployment of additional  interceptors for the duration of New START.

If Obama pursued such initiatives in the 15 months remaining in his term, he would accomplish several objectives with little risk. He would demonstrate to the international community that the messages he preached at Prague in 2009 are more than empty rhetoric and that the United States was willing to walk the extra mile in fulfillment of its nuclear disarmament obligations. In so doing, he just might also be able to convince Putin that there was mutually beneficial business to undertake on strategic arms control.