The first meeting of states-parties to the Treaty on the Prohibition of Nuclear Weapons (TPNW) has produced an ambitious 50-point action plan and several decisions designed to implement the 2017 agreement. It also adopted a political statement that aims, in part, to reinforce norms against nuclear weapons use and threat of use. 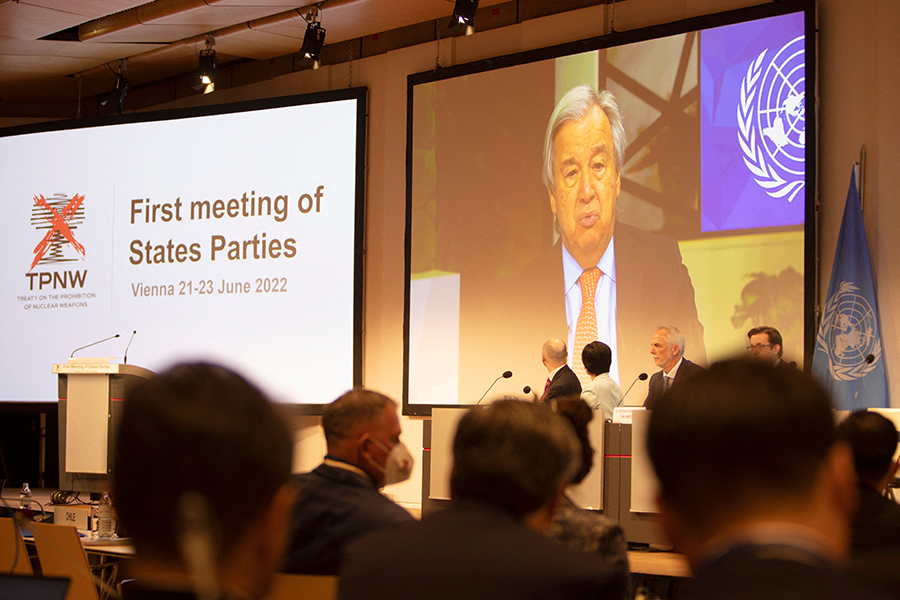 “We will not rest until the last state has joined the treaty, the last warhead has been dismantled and destroyed, and nuclear weapons have been eliminated from this earth,” delegates said in a joint declaration issued at the close of the meeting.

“We stress that any use or threat of use of nuclear weapons is a violation of international law, including the Charter of the United Nations. We condemn unequivocally any and all nuclear threats, whether they be explicit or implicit and irrespective of the circumstances,” the declaration added.

The June 21–23 meeting in Vienna occurred at a moment of unprecedented post-Cold War instability as Russia wages war against Ukraine. To date, 86 states have signed and 66 states have ratified the treaty, which prohibits the possession, development, transfer, testing, use, or threat of use of nuclear weapons. The TPNW entered into force in January 2021.

The condemnation represents the strongest multilateral criticism of such nuclear threats since the UN General Assembly approved a resolution on March 2 condemning the Russian invasion of Ukraine and President Vladimir Putin’s decision to increase the readiness of his nuclear forces. There have also been exchanges of nuclear threats between the United States and North Korea in 2017 and Pakistan’s reference to the possibility of nuclear war with India in 2019, according to a TPNW conference working paper. Most recently, Russia threatened to use nuclear weapons if NATO members intervene militarily in the war in Ukraine. (See ACT, April 2022.)

In a statement issued June 24 by Russian Foreign Ministry spokesperson Maria Zakharova, the Russian government rejected the criticism. “There have never been any ‘nuclear threats’ from Russia and never are. The Russian approach to this issue is based solely on the logic of deterrence.”

Calling NATO actions to be “dangerously balancing on the verge of a direct armed conflict with our country,” she argued that “the logic of deterrence remains an effective way to prevent a nuclear collision and large-scale wars.”

Several states-parties at the Vienna meeting expressed deep concerns about the risks posed by the dangerous nuclear deterrence policies espoused by Russia and the eight other nuclear-armed states and their allies. “The logic that nuclear deterrence provides security is a fundamental error because deterrence requires credibility, meaning the readiness to actually use these weapons. This is nothing less than a massive nuclear sword of Damocles hanging over the head of all of us, of all of humanity. We must take and we have taken a different path,” declared Austrian Foreign Minister Alexander Schallenberg at the beginning of the conference.

Many TPNW delegations joined Schallenberg in expressing concern about the risks posed by nuclear deterrence policies of the nine nuclear-armed states and their allies.

Led by conference president Alexander Kmentt, the Austrian director of disarmament, arms control, and nonproliferation, states-parties made several decisions that will shape the treaty’s future. These include implementing treaty obligations to assist people affected by nuclear weapons use and nuclear test explosions and designating a competent international authority to monitor treaty implementation and compliance. In addition, the conference agreed on steps to promote further TPNW ratifications and to establish a scientific advisory group on the technical aspects of the treaty, including the risks and consequences of nuclear weapons and their use.

The conference statement also expressed deep concern with the fact that none of the nuclear-armed states are taking serious steps to reduce dependence on nuclear weapons. “Instead, all nuclear-armed [states] are spending vast sums to modernize, upgrade, or expand their nuclear arsenals and placing a greater emphasis and increasing the role of nuclear weapons in security doctrines,” the declaration said.

According to a 2022 report of the Stockholm International Peace Research Institute, nuclear arsenals are expected to grow in the coming decade, despite a marginal decrease in the number of nuclear warheads in 2021. The two largest nuclear weapons possessors, Russia and the United States, have suspended discussions on a follow-on arms control agreement to the New Strategic Arms Reduction Treaty, which will expire in 2026.

States-parties also agreed on steps relating to their obligations under treaty articles VI and VII to address the harm from the use and testing of nuclear weapons, including the establishment of an international trust fund for assisting health issues in affected states and for environmental remediation.

They pledged to pursue high-level engagement with states that have not joined the treaty, which was negotiated by more than 120 countries but not the nuclear-armed states.

In 2021, NATO members declared their opposition to the treaty in the Brussels summit communiqué, saying, “We reiterate our opposition to the [TPNW] which is inconsistent with the alliance’s nuclear deterrence policy, is at odds with the existing non-proliferation and disarmament architecture, risks undermining the [nuclear Nonproliferation Treaty (NPT)], and does not take into account the current security environment.”

Yet, NATO member states and close U.S. allies such as Finland, Germany, the Netherlands, Sweden, and Norway attended the first meeting of states-parties as observers.

Germany and Norway delivered statements that reiterated NATO’s declaratory policy regarding the treaty. “As a member to NATO, and as long as nuclear weapons exist, NATO will remain a nuclear alliance, and confronted with an openly aggressive Russia, which has not only invaded Ukraine but is threatening the rules-based international order and peace in Europe, Germany cannot accede to the TPNW, which would collide with our membership in NATO including nuclear deterrence,” Rüdiger Bohn, the German deputy commissioner for arms control and disarmament and head of the German delegation, told the conference.

But he pledged that Germany would seek to engage “in constructive dialogue and exploring opportunities for practical cooperation” with TPNW states.

Jørn Osmundsen, Norwegian special envoy for disarmament affairs, also laid down caveats. “Norway is attending this conference as an observer,” he stressed. “This is not a step towards signing the TPNW, which would be incompatible with our NATO obligations. Norway stands fully behind NATO’s nuclear posture.”

The TPNW conference reaffirmed that the treaty is designed to complement and strengthen the existing nonproliferation and disarmament regime. “In the absence of an enabling legally binding framework and the slow pace of implementation of agreed disarmament commitments, the TPNW’s negotiation and adoption is an effort by nonnuclear-weapon states to make progress towards the full implementation of Article VI of the NPT…[which is] an obligation for all NPT states-parties,” according to a conference working paper developed by Ireland and Thailand in advance of the meeting of states-parties.

States-parties agreed to pursue further discussions about establishing or designating a competent international authority to monitor and verify the disarmament process. They acknowledged the need to elaborate on what procedure and timeline should follow in case a state wishes to disarm and remove nuclear weapons from its territory. (See ACT, May 2021.)

Prior to the TPNW meeting, Austria hosted a fourth conference on the humanitarian impact of nuclear weapons with the goal of bringing together different actors from civil society, academia, and survivors to discuss these issues. Similar conferences in Oslo (March 2013); Nayarit, Mexico (February 2014); and Vienna (December 2014) helped propel non-nuclear-weapon states to launch the negotiations that produced the TPNW in 2017.

The TPNW meeting named Juan Ramón de la Fuente, Mexico’s UN ambassador, to serve as president of the second TPNW meeting of states-parties, which will be held in New York on November 27–December 1, 2023.