As Russian-U.S. tensions over Ukraine continue to grow, neither side is showing any sign of quickly resuming bilateral contact over strategic stability issues that could help avoid misunderstandings and escalation. 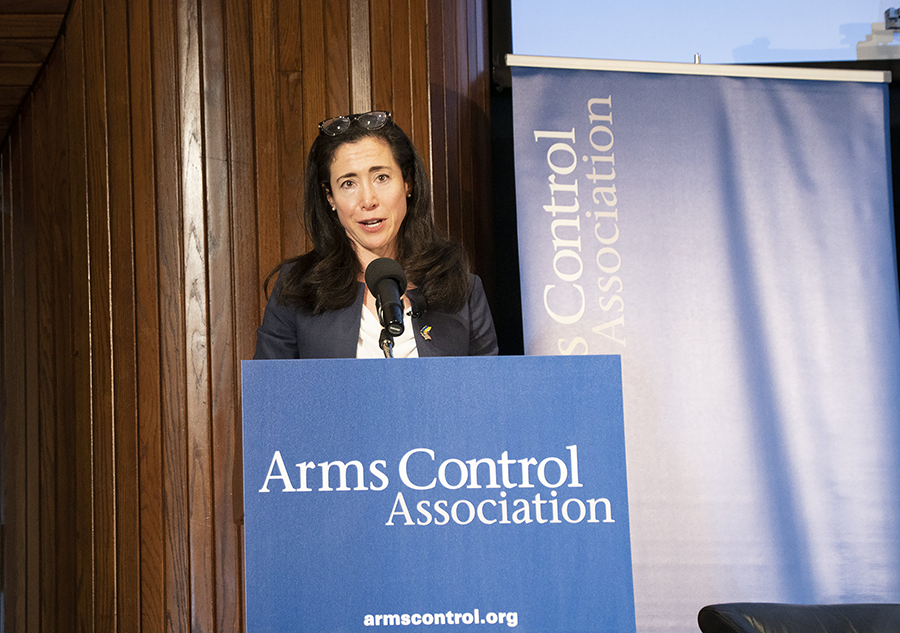 Russian President Vladimir Putin said on June 30 that “Russia is open to dialogue on ensuring strategic stability, preserving agreements on the non-proliferation of weapons of mass destruction, and improving the situation in arms control.”

U.S. President Joe Biden similarly stated in June that engagement with Moscow on strategic stability and nuclear arms control issues must continue even as “we rally the world to hold Russia accountable for its brutal and unprovoked war on Ukraine.”

“Today—perhaps more than any other time since the Cold War—we must work to reduce the risk of an arms race or nuclear escalation,” Biden wrote in a June 2 letter to the Arms Control Association. “My administration is committed to reducing the existential threat posed by nuclear weapons, protecting the American people, and reinvigorating the global nuclear order to reduce the risk of use and proliferation of nuclear weapons.”

But senior U.S. administration officials indicated that current conditions in Ukraine prevent the resuscitation of the bilateral strategic stability dialogue with Russia that the United States paused at the outset of the war.

Mallory Stewart, assistant secretary of state for arms control, verification, and compliance, made a similar point during the Arms Control Association’s annual meeting on June 2.

“With [Russia’s] illegal invasion of Ukraine and their continued, horrific 17th century activities, it’s very hard to figure out how we can sit and think that our diplomacy will be taken seriously on that side,” Stewart explained. “If there was some way to indicate good faith on their side, if there was some way to indicate that the dialogue would be more meaningful than just another meeting in Geneva, we could consider something.”

Meanwhile, Kremlin spokesperson Dmitry Peskov on June 16 described the future of Russian-U.S. nuclear arms control as “important not only for the peoples of our two countries, but also for the whole world, for global security.” This topic, he added, is not one that can be avoided. But Peskov acknowledged on June 30 after Putin's remark that "there are no tangible plans" now to resume the dialogue.

Russia officially launched a full-blown war in Ukraine on Feb. 24. Within two days, the U.S. State Department announced a suspension of the strategic stability dialogue, which Biden and Putin had revived in 2021 and which last took place in January. (See ACT, March 2022; July/August 2021.)

In previous rounds of the dialogue, Washington and Moscow had begun to exchange proposals on future arms control arrangements to follow New START. They also established working groups in an attempt to make headway between official meetings. (See ACT, September and November 2021.)

“Our progress must continue beyond the New START extension,” Biden emphasized in June.

Jenkins, the U.S. undersecretary of state for arms control and international security, said on May 26 that the United States remains committed to “eventually getting back to the table to continue the dialogue on laying the groundwork for future arms control and to the pursuit of follow-on measures” to New START.

She also reiterated the administration’s overall agenda for future arms control, to include sustaining limits on systems covered by New START, addressing new kinds of Russian nuclear weapons in the development or deployment stages, and limiting the Russian arsenal of tactical nuclear weapons.

For its part, Moscow has continued to call for the creation of “a new security equation” that addresses all nuclear and non-nuclear, offensive and defensive weapons that affect strategic stability. That would include U.S. missile defense systems, which Washington has long resisted putting up for negotiation, as well as missile systems formerly banned by the 1987 Intermediate-Range Nuclear Forces Treaty. Russia incorporated this agenda into its December proposals on security guarantees to the United States and NATO.

Given the various likely divisive topics on the table and the makeup of the U.S. Senate, Washington and Moscow have conceded that what may follow New START might not be a traditional arms control treaty, but rather another type of arms control arrangement or arrangements.

Putin’s decision to raise the alert level of Russian nuclear forces in the opening days of the war and his multiple threats since then to use nuclear weapons should any country interfere in Ukraine has further highlighted the need for a revived dialogue to ensure limits on the world’s two largest nuclear arsenals.

Despite Putin’s hostile behavior and rhetoric, the Biden administration has repeatedly made assurances that there is not an imminent threat of Russian use of nuclear weapons.

“We currently see no indication that Russia has intent to use nuclear weapons in Ukraine,” Biden wrote in a May 31 op-ed for The New York Times. “Let me be clear: Any use of nuclear weapons in this conflict on any scale would be completely unacceptable to us as well as the rest of the world and would entail severe consequences.”

The Pentagon also repeated its assessment on May 26 that it sees no indication that “we would need to change our strategic deterrent posture.”

Since March, U.S. national security officials have conducted a series of tabletop exercises to evaluate how the president should respond if Putin uses nuclear weapons in Ukraine or around the Black Sea. (See ACT, April 2022.) An administration official, speaking on the condition of anonymity, told the Times on June 1 that the group is focusing primarily on non-nuclear responses, such as sanctions and conventional strikes.

The three ranking members on the House foreign affairs, intelligence, and armed services committees—Reps. Michael McCaul (R-Texas), Mike Turner (R-Ohio), and Mike Rogers (R-Ala.), respectively—sent Biden a letter on June 17, asking for further details on how the United States might respond to the Russian use of a nuclear weapon in Ukraine.

“We urge you to clarify U.S. policy concerning the use of tactical nuclear weapons by Russia in Europe and to clearly communicate such policy to the Russian government,” they wrote. “If Russia uses nuclear weapons in Ukraine, the U.S. must act. This must be clear to Russia to deter their use of nuclear weapons in this unprovoked war of aggression against Ukraine.”

Meanwhile, Russia in June proceeded with military nuclear exercises after simulated nuclear exercises the previous month. The latest drills were held in Ivanovo province, northeast of Moscow, with an estimated 1,000 troops and 100 vehicles, according to the Russian Defense Ministry on June 1.

The June exercises were aimed at practicing setting up missile systems in the field, carrying out “intensive maneuvering actions on combat patrol routes,” and organizing combat security. The drills featured the nuclear-capable Yars intercontinental ballistic missile.

A Russian military official said on June 1 that the Zircon, a sea-launched hypersonic cruise missile, has completed the testing phase of development and will be deployed by the end of 2022. In May, Russia said it had launched a Zircon missile from a frigate in the Barents Sea to a target about 625 miles away in the White Sea.