Iran and the United States agreed to resume indirect negotiations aimed at restoring the 2015 Iran nuclear deal after EU foreign policy chief Josep Borrell traveled to Tehran to quell escalating tensions between the two countries that threatened to derail a return to talks. 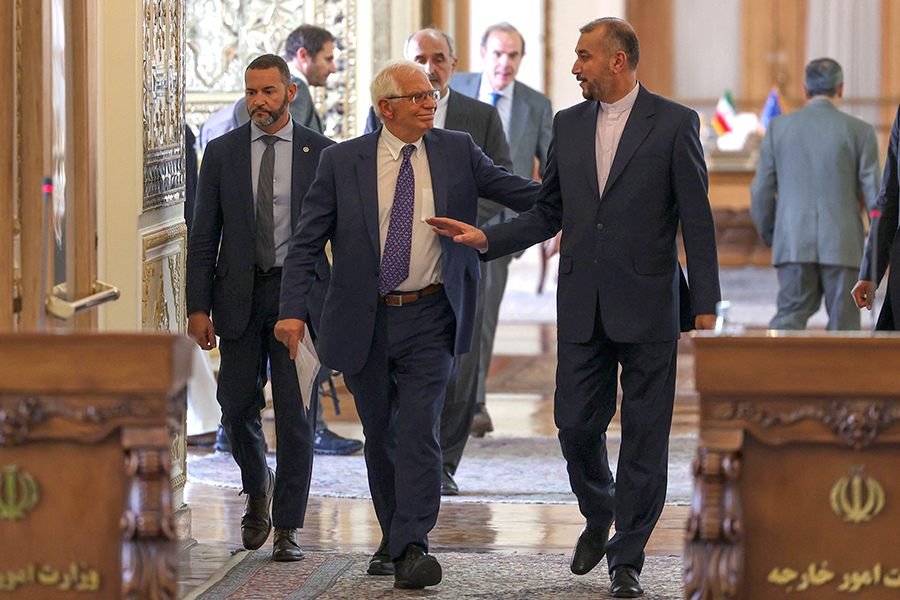 In a June 25 press conference following his meeting with Iranian Foreign Minister Hossein Amirabdollahian, Borrell said his trip had “one main objective,” which was to “break the current dynamic of escalation and to break the stalemate of the negotiations” to restore the nuclear deal, known as the Joint Comprehensive Plan of Action (JCPOA). He said it was of “paramount importance to give new momentum” to negotiations and that talks will resume “in the coming days.”

The European Union serves as coordinator for the group of states known as the P5+1 (China, France, Germany, Russia, the United Kingdom, and the United States) that negotiated the JCPOA and facilitated indirect negotiations between Washington and Tehran for a year before talks stalled in March.

Borrell said that he and Amirabdollahian agreed to “try to solve the last outstanding issues” and that there are “decisions that have to be taken in Tehran and in Washington.”

Borrell was likely referring to the Biden administration’s refusal to remove the Islamic Revolutionary Guard Corps (IRGC) from the U.S. list of foreign terrorist organizations, an issue that caused the stalemate in negotiations, without reciprocal commitments from Iran to reduce tensions in the region. (See ACT, May 2022.)

Amirabdollahian confirmed Iran’s willingness to resume talks and said he hoped the Biden administration will “realistically and fairly engage” in negotiations. He said Iranian President Ebrahim Raisi’s priority is to reach a deal that ensures that Iran will receive the full economic benefit envisioned by the JCPOA.

Amirabdollahian’s comments, along with statements from other Iranian officials over the past several weeks, suggest that Iran may have softened its position and may be willing to accept a package that does not include removing the IRGC from the list of foreign terrorist organizations.

Amirabdollahian also said he and Borrell agreed to “end the tension that has existed in recent days."

The agreement to resume talks comes at a critical time in the negotiations as an escalatory spiral of actions had threatened talks to restore the deal.

After the International Atomic Energy Agency (IAEA) Board of Governors passed a resolution censuring Iran for failing to cooperate with an agency investigation into undeclared nuclear materials and activities from the pre-2003 period, Iran retaliated by disconnecting 27 IAEA cameras surveilling key Iranian facilities and equipment monitoring enrichment levels.

The IAEA has not had access to the data from these cameras since February 2021 when Iran reduced agency verification activities. But IAEA Director-General Rafael Mariano Grossi reached an arrangement whereby Iran would allow cameras to collect data that would be handed over to the agency later when the JCPOA was restored.

That arrangement staved off a crisis by ensuring that the agency would be able to reconstruct a history of Iran’s nuclear activities during the period of reduced monitoring. (See ACT, March 2021.)

Any gap in monitoring could prevent the IAEA from maintaining that continuity of knowledge about Iran’s nuclear activities, which could make it more difficult, if not impossible, for the agency to establish the baseline necessary to monitor and verify Iran’s nuclear program under a restored JCPOA.

Grossi said on June 9 that Iran’s decision to unplug the cameras would be a “fatal blow” to JCPOA restoration efforts within three to four weeks. After that period, the IAEA would not “be able to give them the accuracy that [the parties to the JCPOA] require” to implement the deal, he said.

Although the United States appears to believe the window for restoring the accord is longer than the three to four weeks that Grossi referenced, the three European parties to the deal said Iran’s actions “will only aggravate the situation” and “cast further doubt on Iran’s commitment to a successful outcome.” In a June 9 statement, France, Germany, and the UK urged Iran to seize the opportunity to restore the JCPOA and to “cease its nuclear escalation.”

In addition to further reducing monitoring, Iran informed the IAEA that it began installing IR-6 centrifuges, which are used to enrich uranium, at its Natanz facility. The IAEA confirmed this in a June 8 report to the agency’s Board of Governors.

Iran was prohibited from producing enriched uranium with its IR-6 centrifuges under the JCPOA; production and testing of those machines were also limited by the accord. If Iran completes installation of the new cascades, it will have installed about 1,000 IR-6 centrifuges.

The IAEA also confirmed in a May 30 report that Iran has produced 43 kilograms of uranium enriched to 60 percent uranium-235.

The advanced centrifuge machines, along with Iran’s growing stockpile of uranium enriched to 60 percent uranium-235, a level just short of the 90 percent considered weapons grade, decrease the amount of time it would take to produce enough nuclear material for a bomb. Laura Holgate, U.S. ambassador to the IAEA, said in a June 7 statement to the IAEA board that Iran’s enrichment of uranium to 60 percent U-235 “has no credible peaceful purpose.”

The Biden administration, also seeking to ratchet up pressure, announced new sanctions targeting companies in China and the United Arab Emirates that are engaged in exporting Iranian oil in violation of U.S. sanctions.

In a June 16 press release, Brian Nelson, undersecretary of treasury for terrorism and financial intelligence, said that “absent a deal” to restore the JCPOA, the United States will continue to use sanctions to limit Iran’s exports of petroleum and petroleum-based products. These sanctions would be lifted if the JCPOA were restored.