“Your association has taken a significant role in fostering public awareness of nuclear disarmament and has led to its advancement.”
– Kazi Matsui
Mayor of Hiroshima
June 2, 2022
IAEA Board Rebukes Iran

The International Atomic Energy Agency (IAEA) Board of Governors has rebuked Iran for failing to cooperate with an agency investigation into evidence that Tehran failed to declare nuclear materials and activities, prompting Iran to retaliate by reducing IAEA monitoring of its nuclear program. 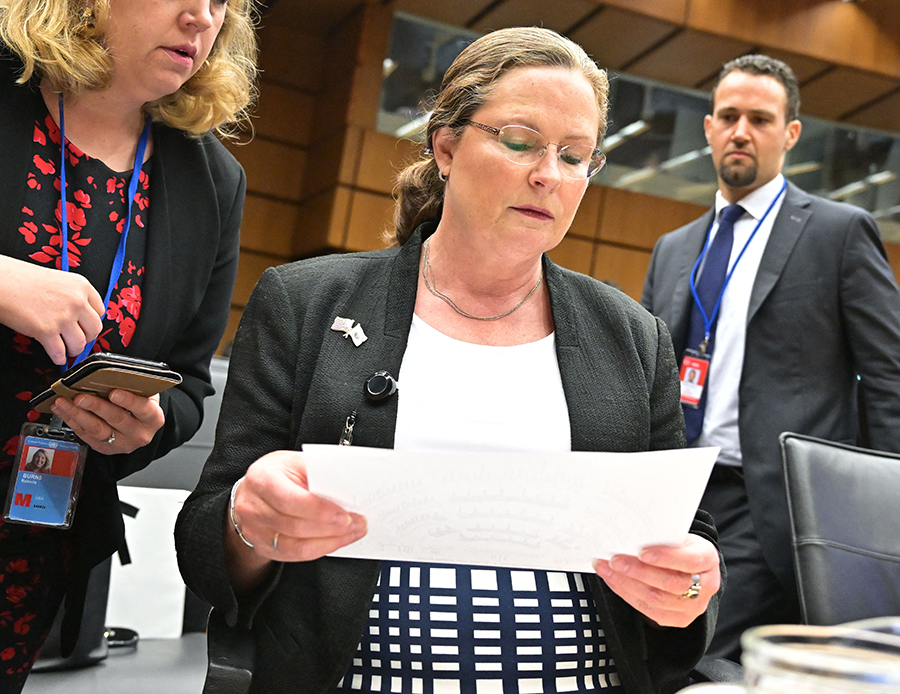 The board passed the censure resolution on June 8 by a vote of 30–2, with three countries abstaining. It was the second time that the board has taken action to spur Iran’s cooperation since the IAEA opened its investigation in 2018. (See ACT, July/August 2020.)

In a June 6 statement to the board, IAEA Director-General Rafael Mariano Grossi said Iran “has not provided explanations that are technically credible” regarding the presence of uranium at three undeclared locations in Iran.

Although the activities under investigation took place prior to 2004 when Iran had an organized nuclear weapons program, it is still required to declare all nuclear materials and activities to the agency as part of the country’s safeguards agreement, which is legally required under the nuclear Nonproliferation Treaty.

The resolution called on Iran to “act on an urgent basis to fulfil its legal obligations” and work with the IAEA to “resolve all outstanding safeguards issues.” It also expressed concern about Iran’s “insufficient substantive cooperation” with the IAEA’s safeguards investigation.

Ahead of the board’s vote, Mohammad Eslami, head of the Atomic Energy Organization of Iran (AEOI), told Al-Jazeera that Iran has provided the agency with accurate explanations but the IAEA lacks the “will” to be convinced by Iran’s answers.

But according to a May 30 IAEA report on the investigation, the only recent explanation Iran gave was that third-party sabotage contaminated the three locations with uranium. Iran failed to provide evidence to back up that claim, according the report.

Eslami also said in the June 6 interview that the evidence that spurred the IAEA investigation is based on “fake documents and accounts” provided by Iran’s enemies.

In 2018, Israel turned over information to the IAEA that it stole from Iran pertaining to the country’s pre-2004 illicit nuclear weapons program. The IAEA has repeatedly stated that it has a rigorous process to evaluate information shared by member states.

Laura Holgate, U.S. ambassador to the IAEA, said in a June 8 statement that the United States is “not taking this action to escalate a confrontation for political purposes.” She said the United States seeks “credible explanations” to “finally put these issues behind us” and still supports efforts to restore the 2015 nuclear deal, known as the Joint Comprehensive Plan of Action (JCPOA).

Despite this, Iran retaliated for the resolution by disconnecting 27 IAEA cameras surveilling nuclear facilities in Iran and turning off equipment monitoring Iran’s uranium-enrichment activities. Although this reduction in transparency will have no effect on the IAEA investigation, it complicates negotiations to return Iran and the United States to compliance with the JCPOA.

After the IAEA board last censured Iran in June 2020, Tehran allowed IAEA inspectors to take samples at two locations under investigation. But given rising Iranian-U.S. tensions over negotiations to restore the 2015 nuclear deal, from which the United States withdrew in 2018, it is not clear that the June 8 resolution will have a similar effect.

Iranian President Ebrahim Raisi said on June 9 that Iran will not “retreat as a result” of the resolutions and “will not take a step back from its positions.” Supporters of the censure argue it was necessary to support the IAEA and broader nonproliferation goals.

France, Germany, the United Kingdom, and the United States, resolution co-sponsors, said in a June 8 joint statement that board action was necessary because the “challenge posed by Iran’s insufficient cooperation on substance is serious and ongoing.” The IAEA’s authority and the integrity of the safeguards regime “are at stake,” the statement said.

The May 30 report included more detail than past IAEA reports about the undeclared nuclear activities that Iran may have conducted at the locations under investigation. The IAEA also named the sites for the first time.

According to the report, evidence suggests Iran conducted activities related to the nuclear fuel cycle, including uranium processing and conversion, at Varamin. Another location, Turquzabad, was used to store material and equipment, including from the activities at Varamin. At a third location, Marivan, evidence suggests that Iran conducted explosive experiments relevant to building a nuclear device.

The report concluded that Iran undertook uranium metal activities at a fourth location, Lavisan-Shian, that should have been declared to the IAEA under Iran’s safeguards agreement. The IAEA said it has no more questions for Iran about that site.