Defense Secretary Lloyd Austin hosted more than a dozen hypersonics industry executives in February as a demonstration of the Pentagon’s commitment to quicken the development of hypersonic weapons systems, which the department considers a technology priority as it races to keep pace with China and Russia. 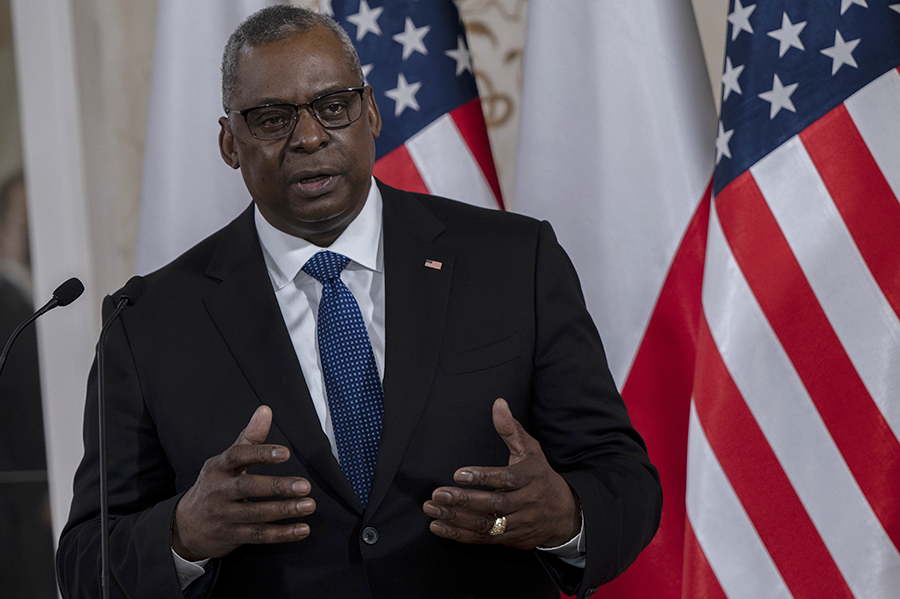 During the Feb. 3 meeting, Austin “noted the need for persistent dialogue in order to meet the department’s current and future capabilities requirements for defensive and offensive capabilities,” according to a Pentagon statement released afterward.

Politico reported on Jan. 26 that plans for the meeting came together after the military services submitted fiscal year 2023 budget proposals that Austin deemed inadequate for speeding up the development and deployment of hypersonic weapons systems, which China and Russia have already begun to field.

Officially, the executive roundtable was part of a series of engagements focused on the Pentagon’s critical technology development areas, including hypersonics, that Heidi Shyu, undersecretary of defense for research and engineering, revealed in a Feb. 1 memo. She highlighted three groups of 14 technology areas and announced that she will craft a new national defense science and technology strategy, which will be influenced by the yet-to-be-released 2022 National Defense Strategy.

“By focusing efforts and investments into these 14 critical technology areas, the department will accelerate transitioning key capabilities to the military services and combatant commands,” wrote Shyu, who stressed the need for this transition of technology from invention to fielding to occur “more swiftly.”

In the defense-specific category, Shyu listed hypersonics, noting that “strategic competitors,” namely China and Russia, have already deployed such capabilities and declaring that the Pentagon “will develop leap-ahead and cost-effective technologies for our air, land, and sea operational forces.”

This top-level push for a reinvigorated focus on hypersonic weapons systems at the Defense Department comes even as there remain unanswered questions, acknowledged by officials, about the overall cost, mission, and required quantity of U.S. hypersonic weapons.

Shyu noted on Jan. 13 that the current price tag for hypersonic capabilities is high, but said that it could come down with automation and higher production quantities.

The Pentagon has not publicized the exact number of hypersonic glide vehicles and cruise missiles it wants to acquire, although Gillian Bussey, director of the Joint Hypersonics Transition Office, called for higher quantities on Feb. 8.

Possessing hypersonic weapons “isn’t going to make a difference unless we have sufficient quantities,” Bussey said. “Having a dozen hypersonic missiles, regardless of whether they’re really hypersonic or not, isn’t going to scare anyone.”

Air Force Secretary Frank Kendall cautioned in January that the United States must “be careful about not mirror-imaging the potential threats.” In other words, he does not see a need to match China and Russia one for one. Rather, Kendall said, “we have to look very carefully at the targets that we’re interested in and at the most cost-effective way to deal with [them].”

Details on the exact targets and missions envisioned remain scarce.

“What missions would [hypersonic weapons] perform? Against what types of targets? In what geographic setting?” asked Tom Mahnken, president at the Center for Strategic and Budgetary Assessments, in a Jan. 26 Politico article. “Answers to questions such as these would go a long way toward determining how many hypersonic weapons we need to buy and of what type.”

According to a Feb. 4 report by Breaking Defense, two major concerns expressed by the executives were the effects of the existing continuing resolution on the fiscal year 2022 budget and the lack of infrastructure for hypersonic weapons testing, such as wind tunnels.

Although Congress passed the 2022 defense authorization bill in December, it has yet to adopt the relevant appropriations bills, which would actually make funding available, and instead passed stopgap continuing resolutions through March 11. (See ACT, January/February 2022.)

Regarding hypersonics testing, “[P]articipants identified a need to expand access to modeling capabilities and testing facilities in order to adopt a ‘test often, fail fast, and learn’ approach which will accelerate the fielding of hypersonic and counter-hypersonic systems,” according to the Pentagon statement.

This testing concern voiced by hypersonics industry executives echoed a finding in a Jan. 27 report by the Pentagon’s testing and evaluation office that the department does not have enough open space on its missile test ranges to test hypersonic weapons. Bloomberg first reported on this finding Feb. 3 after obtaining the nonpublic version of the report, as the public version excluded that information.

Test ranges across the country are projected to face an overwhelming increase in demand of more than 50 percent by 2025 unless they are expanded, the report stated.

The public version of the report did acknowledge that the test schedule for the Air Force’s hypersonic boost-glide vehicle, the Air-Launched Rapid Response Weapon (ARRW) system, “could be delayed due to the limited number and availability of hypersonic flight corridors, target areas, and test support assets.” These limited assets, the report said, “will not allow a standard assessment for operational effectiveness, lethality, suitability, and survivability.”

The ARRW system failed three flight booster tests, in April, July, and December 2021, and is slated to achieve an initial operating capability this fiscal year. (See ACT, January/February 2022.) The Air Force could still stick to this timeline and start production this year, said Brig. Gen. Heath Collins, the Air Force program executive officer for weapons, in a Jan. 13 interview with Breaking Defense. But “it is dependent on resolution of the failure [in December] and executing the rest of the test program up through all-up-round [testing],” he cautioned.

The ARRW system must successfully complete booster and all-up-round test flights before a contract is awarded to manufacturer Lockheed Martin to kick-start production.

The nonpublic version of the Pentagon’s testing report also highlighted concerns with hypersonic missile defense. The Defense Department cannot sufficiently simulate the threat from an incoming hypersonic weapon and therefore “needs to continue to pursue the representation of these environments in model and simulation and live fire testing,” the report said.

The lack of the necessary 2022 defense appropriations bill has also impeded the Pentagon’s plans for hypersonic missile defense, according to Vice Adm. Jon Hill, director of the Missile Defense Agency (MDA).

“We live in a world right now where we don’t have current year appropriations, and we also don’t have insight into the following year’s topline. Unfortunately, that throttles this program,” Hill said, referring to the Glide Phase Interceptor, a hypersonic missile intended to destroy an adversary’s hypersonic weapon in its glide phase. The MDA awarded contracts to three companies in November to develop prototypes for this interceptor. (See ACT, January/February 2022.)

In a related development, Austin and Secretary of State Antony Blinken announced on Jan. 6 a new agreement with Japan aimed at fostering greater collaboration on research and development of emerging technologies, to include counterhypersonic technologies.

“We’re launching a new research and development agreement that will make it easier for our scientists, for our engineers, and program managers to collaborate on emerging defense-related issues, from countering hypersonic threats to advancing space-based capabilities,” Blinken said.