The United States and Iran are “potentially within days” of reaching an agreement to restore mutual compliance with the 2015 Iran nuclear deal, White House spokesperson Jen Psaki said on Feb. 23. Negotiations in Vienna have made “significant progress” but some issues are still unresolved and “there’s very little time remaining to reach a deal given the pace of Iran’s nuclear advances,” she told a press briefing. 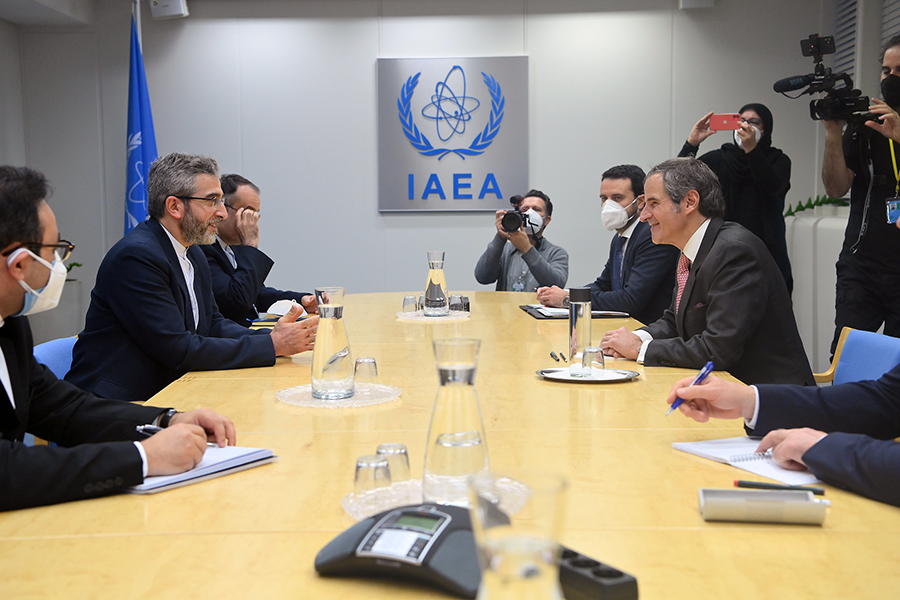 The negotiators have produced a 20-page document with appendixes on sanctions, nuclear commitments, and implementation of the restored agreement, including sequencing and verification, according to an unnamed Iranian source in Tehran. That source, quoted by the website Amwaj.media on Feb. 15, said the document reflects “the whole deal,” but is still under negotiation.

Philippe Errera, France’s lead negotiator in Vienna, on Feb. 23 tweeted a photo of the apparent draft under consideration with the words “nothing is agreed until everything is agreed” written across the top of the page.

Disagreements between Iran and the other negotiating parties (China, France, Germany, Russia, the United Kingdom, and the United States) continue to slow the talks, which are aimed at restoring U.S. and Iranian compliance with the deal, known formally as the Joint Comprehensive Plan of Action (JCPOA). Both sides appear to remain divided over issues of scope and verification, as Tehran is demanding broader relief from U.S. sanctions than Washington is willing to offer, and a formal guarantee against a future U.S. withdrawal from the accord. Even so, pressure is growing for a resolution because of Iran’s continued nuclear advancements, which could soon render it impossible to recapture some of the nonproliferation benefits envisaged by the JCPOA.

U.S. State Department spokesman Ned Price warned on Feb. 14 that “at the current rate of Iran’s nuclear advancements, we have little time left, and that’s precisely because at a certain point very soon those nuclear advances will obviate the advantages that the JCPOA, as it was finalized in 2015 and implemented in 2016, initially conveyed.” The deal imposed a series of limitations on Iran’s nuclear activities that shrank its nuclear program and lengthened the time it would take for Iran to produce enough weapons-grade enriched uranium-235 for one nuclear bomb. “Time is very quickly ticking away,” Price added, as Iran’s enriched uranium stockpile continues to grow.

Negotiations to restore the deal began in April 2021, almost three years after U.S. President Donald Trump unilaterally withdrew from the JCPOA and reimposed crippling sanctions on Iran that had been lifted under the accord. Iran began to breach the deal’s limits in May 2019, and now, its nuclear program is larger and more sophisticated than it was before the nuclear deal was implemented. If talks succeed in restoring the accord, Iran will revert to the JCPOA’s limits in exchange for the United States recommitting to the deal and lifting certain sanctions.

The United States and Iran have yet to meet face to face in Vienna, but each has taken provisional steps toward compliance with the accord that could be perceived as a tacit concession to the other side.

According to an unreleased report by the International Atomic Energy Agency (IAEA), Iran informed the agency on Jan. 19 of its intent to close the Karaj centrifuge component manufacturing workshop in favor of a different facility. The Karaj workshop, which was the subject of a months-long impasse over access between Iran and the IAEA that threatened to upend JCPOA negotiations, is now closed, according to the agency. (See ACT, January/February 2022.)

The United States, for its part, moved on Feb. 4 to reinstate nonproliferation waivers that were mandated by the JCPOA but were lifted after the United States withdrew from the deal. As a result, cooperative nonproliferation projects can resume in Iran without penalty of sanctions. The waivers will “facilitate discussions that would help to close a deal on a mutual return to full implementation of the JCPOA and lay the groundwork for Iran’s return to the performance of its JCPOA commitments,” the State Department wrote in its report to Congress.

EU foreign policy chief Josep Borrell, the coordinator of the JCPOA, said, “I strongly believe an agreement is in sight” after a Feb. 14 phone call with Iranian Foreign Minister Hossein Amirabdollahian. “The moment has come to make an ultimate effort and reach a compromise,” he added.

But, several challenges remain. Tehran has called repeatedly for the “total lifting” of U.S. sanctions on Iran, including those imposed on its ballistic missile programs and other military activities. The Biden administration has said it is only willing to revoke the sanctions that were lifted when the JCPOA was implemented and reimposed when the United States withdrew from the accord.

Yet an anonymous congressional aide cited by The Washington Post on Feb. 23 remarked, “Right now, there are enough changes in the draft deal that the administration is expected to declare that the new agreement is subject to INARA,” the Iran Nuclear Agreement Review Act of 2015, which authorized the U.S. Treasury Department to lift sanctions when the deal was first implemented. The aide’s assessment suggests the lifting of U.S. sanctions on Iran beyond those prescribed by the 2015 JCPOA could be up for consideration.

A source close to Iran’s negotiating team told reporters on Feb. 8 that Tehran had made a political decision presumably to return to compliance with the JCPOA and that Washington should follow suit. In a phone call to Chinese Foreign Minister Wang Yi on Feb. 8, Amirabdollahian said the United States “needs to make a decision on lifting sanctions [and] show significant distance from [the] failed policies” of the Trump administration.

Iran insists that the Biden administration verify that the sanctions are lifted by providing a guarantee that the United States will not again withdraw from the accord under a future administration, as Trump did in 2018. Amirabdollahian told The Financial Times on Feb. 16 that, “as a matter of principle, public opinion in Iran cannot accept as a guarantee the words of head of state, let alone the United States, due to the withdrawal of Americans from the JCPOA.”

Iran’s Foreign Ministry spokesman Saeed Khatibzadeh said on Feb. 21 that if the United States cannot offer a political guarantee against withdrawal, Iran will accept an “inherent guarantee.” He suggested that means Iran will promptly begin to breach the JCPOA if the United States again withdraws and reimposes sanctions in the future.

Despite progress in Vienna, Iran’s lead negotiator Ali Bagheri Kani tweeted on Feb. 24, “No matter how close we get to the finish line, there is not necessarily a guarantee to cross it.”