The discovery of what is likely a new North Korean base for launching intercontinental ballistic missiles (ICBMs) is further evidence of the country’s expanding military capabilities and is heightening concerns that Pyongyang could soon end its moratorium on ICBM testing. 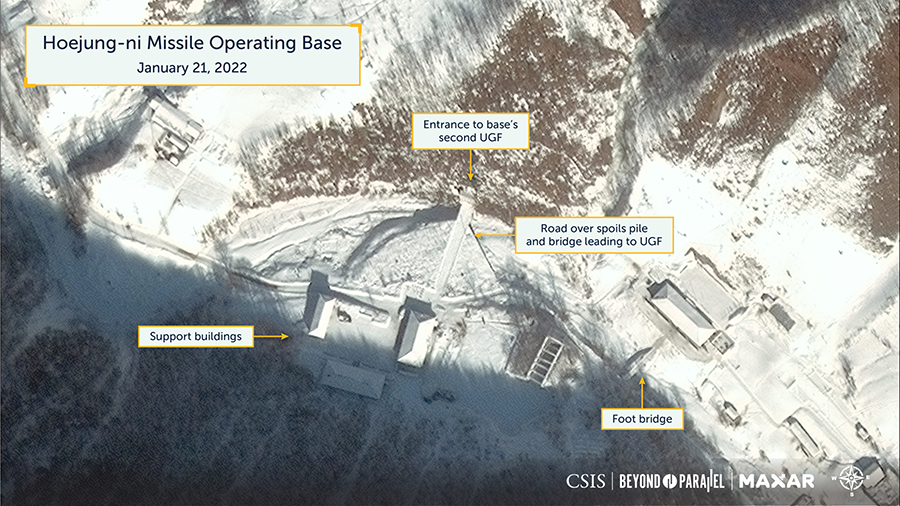 The Hoejung-ni missile operating base is underground and just 15 miles from the Chinese border, a location that analysts surmise was chosen to deter preemptive strikes by the United States and other adversaries. A strike against the base would invariably affect Chinese entities, said Victor Cha, one of the analysts at the Center for Strategic and International Studies who publicly identified the location in a Feb. 7 report.

They wrote that “[t]he Hoejung-ni missile operating base will, according to informed sources, likely house a regiment-sized unit equipped with [ICBMs].”

“[S]hould operational ICBMs not become available in the near term, it is likely that intermediate-range ballistic missiles will be deployed,” the experts added.

North Korea has not tested an ICBM since November 2017, but it launched the Hwasong-12 intermediate-range ballistic missile in January 2022, marking its first longer-range missile test in more than four years. North Korean leader Kim Jong Un imposed a long-range missile testing moratorium in April 2018, when he said that “we no longer need any nuclear test or test launches of intermediate- and intercontinental-range ballistic missiles.”

In all, North Korea conducted eight missile tests this year, prompting the United States to strengthen its sanctions and press the United Nations for increased international sanctions against Pyongyang. All except the Hwasong-12 were shorter-range missiles.

Reacting to what he called U.S. “hostile policy,” Kim announced via state-run media on Jan. 20 that Pyongyang would consider “restarting all temporarily suspended activities,” which include nuclear and ICBM tests. He warned that the military threat by the United States has reached “a danger line that cannot be overlooked.” In a Feb. 9 statement, the North Korean Foreign Ministry further boasted that North Korea can “[fire] a missile with the U.S. mainland in its range” and highlighted the “remarkable achievements” of the missile tests conducted in January.

North Korea claims to have tested a hypersonic glide vehicle once before, in September 2021.

Responding to North Korea’s Jan. 5 test, South Korea disputed the claim that it involved a hypersonic glide vehicle and argued that Pyongyang had not acquired the technology or mastered the capability to launch such a weapon.

Instead, the South Korean Defense Ministry asserted that the test involved a ballistic missile that could be intercepted by U.S. and South Korean missile defenses. U.S. Indo-Pacific Command issued a statement on Jan. 5 reaffirming that “the U.S. commitment to the defense of the Republic of Korea and Japan remains ironclad.”