Saudi Arabia is manufacturing ballistic missiles with China’s help, according to a U.S. intelligence assessment reported on Dec. 23 by CNN. Although Riyadh previously purchased missiles from Beijing, this is believed to be the first time it has produced them domestically, and the development is raising concerns about a new missile race in the Middle East. 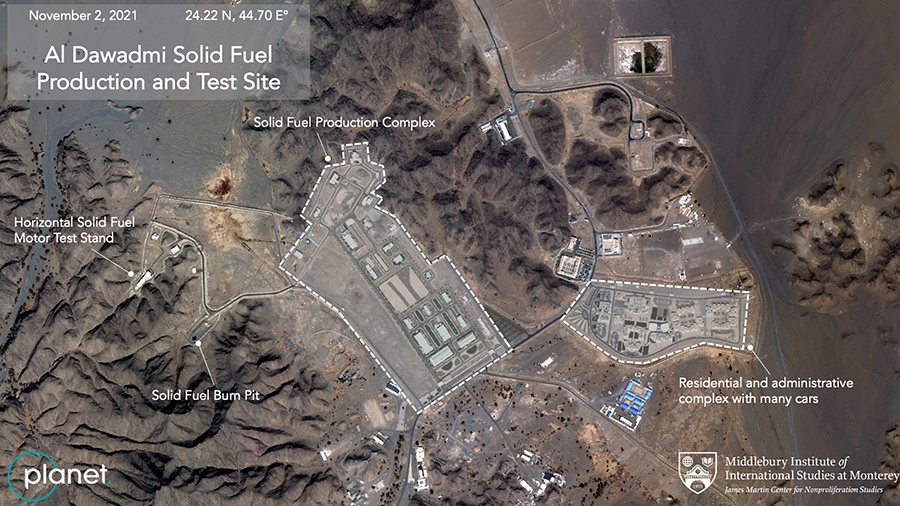 Saudi Arabia is thought to be seeking to advance its missile capabilities to bolster its capabilities in Yemen, where the kingdom remains entrenched in a war against Iran-aligned Houthi rebels.

Satellite images of a site near al-Dawadmi, west of Riyadh, suggest that Saudi Arabia is producing solid-fueled ballistic missiles, as evidenced by signs of a “burn pit” that is used to dispose of solid-propellant leftover from the production line.

The burn pit is “a strong signature” that the facility is manufacturing solid-fueled missiles, according to experts Jeffrey Lewis and David Schmerler of the James Martin Center for Nonproliferation Studies. Compared to liquid-fueled missiles, which are generally filled with a liquid propellant prior to launch, solid-fueled missiles are considered a greater strategic risk because they can be fueled and concealed or transported in one piece and fired on a moment’s notice.

In an Arms Control Wonk blog post on Dec. 23 analyzing the images, Lewis and Schmerler assessed that the site “appears to have been built with Chinese assistance.” The fuel production and test site is near the al-Watah missile production facility. The missile facility was first publicly identified by Lewis and his team in 2019, and the U.S. intelligence community later that year publicly confirmed that Saudi Arabia had expanded the al-Watah plant to include the rocket engine production and test facility near al-Dawadmi. (See ACT, March and July/August 2019.) The engine test stand observed at the site in 2019 closely resembles those produced by China, leading the open-source analysts to identify Beijing as a likely supplier of the technology.

U.S. officials across multiple agencies reportedly have been briefed by the intelligence community on large transfers of sensitive ballistic missile technology from China to Saudi Arabia in recent months, according to CNN. The specific model of solid-fueled missile being produced at the al-Dawadmi site remains unknown, but given Beijing’s assistance, it could be of Chinese design.

Saudi Arabia already possesses ballistic missiles purchased from China, including the 3,000-kilometer-range Dong Feng-3, which the kingdom displayed in 2014, and other Dong Feng-class missiles transferred from Beijing in batches since 2018.

The new missiles will likely carry conventional weapons, given that Saudi Arabia does not have nuclear weapons and is a party to the nuclear Nonproliferation Treaty (NPT). But Riyadh is seeking to expand its civilian nuclear power infrastructure and may be constructing a new uranium-processing facility, known as Al-Ula, to produce yellowcake, also with Chinese assistance. (See ACT, September 2020.) Saudi Arabia’s small-quantities protocol safeguards agreement with the International Atomic Energy Agency (IAEA) is outdated and would not permit the agency to inspect a yellowcake production facility. Riyadh has denied the existence of the Al-Ula facility, but any activity there would go unmonitored by the IAEA, thereby raising concerns about potential covert nuclear operations.

Crown Prince Mohammed bin Salman said in March 2018 that “if Iran developed a nuclear bomb, we will follow suit as soon as possible.” There is no indication that Iran intends to produce a nuclear weapon at this time, and negotiations to restore stringent limitations to Iran’s nuclear program under the 2015 nuclear deal are ongoing.

The United States has repeatedly refused to sell ballistic missiles to Saudi Arabia, citing proliferation concerns and a commitment to remain within the Missile Technology Control Regime (MTCR), which seeks to limit the spread of ballistic missile technology. Although not illegal, China’s assistance to Saudi Arabia contradicts its vow to abide by the MTCR. China is not a member of the export control regime, but has pledged to voluntarily abide by its guidelines, which prohibit the export of missiles capable of delivering a 500-kilogram payload more than 300 kilometers.