The five original nuclear-weapon states have pledged that “a nuclear war cannot be won and must never be fought” in a rare joint statement intended to reduce tensions and avoid nuclear conflict. 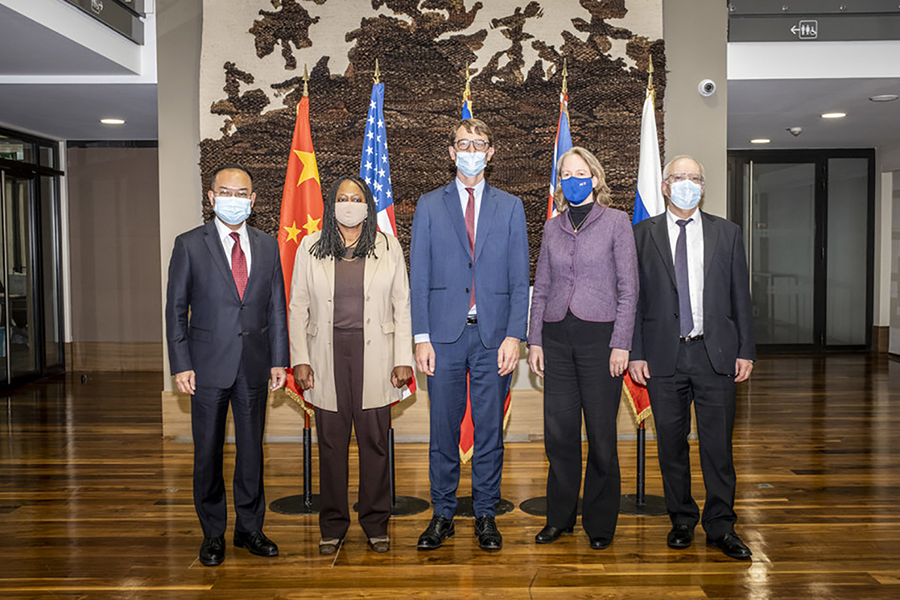 “As nuclear use would have far-reaching consequences, we also affirm that nuclear weapons—for as long as they continue to exist—should serve defensive purposes, deter aggression, and prevent war. We believe strongly that the further spread of such weapons must be prevented,” China, France, Russia, the United Kingdom, and the United States said in the statement, issued on Jan. 3.

The five are the only nuclear-weapon states recognized under the 1968 nuclear Nonproliferation Treaty (NPT), and their pledge was among several coordinated steps taken in advance of the treaty’s 10th review conference, which was supposed to start Jan. 4 but has been delayed because of the COVID-19 pandemic.

The principle that “a nuclear war cannot be won and must never be fought” was articulated in 1985 by Soviet Leader Mikhail Gorbachev and U.S. President Ronald Reagan and reaffirmed by U.S. President Joe Biden and Russian President Vladimir Putin at their June 2021 summit in Geneva. At the last gathering of the NPT nuclear-weapon states in 2020, the United States balked over a proposal by China for a joint declaration on this principle.

Although the statement, coming at a time of rising international tensions, was welcomed by many experts, nuclear activists were quick to note the contradiction between the words and deeds of the nuclear-weapon states. “They write this ‘nice’ statement but doing exactly the opposite in reality. They’re in a nuclear arms race, spending billions on modernizing and constantly prepared to start a nuclear war,” tweeted Beatrice Fihn of the International Campaign Against Nuclear Weapons (ICAN).

On Dec. 2–3, representatives from the five states gathered for the first time in nearly two years in Paris to reaffirm their commitment to the NPT and prepare for the review conference. The meeting produced a joint communiqué reaffirming their adherence to Article VI of the treaty and expressing support for “the ultimate goal of a world without nuclear weapons with undiminished security for all.”

Article VI commits the countries to pursuing “negotiations in good faith on effective measures relating to cessation of the nuclear arms race at an early date and to nuclear disarmament, and on a treaty on general and complete disarmament under strict and effective international control.”

The five NPT-recognized nuclear-weapon states are also the five permanent members of the UN Security Council. Their December meeting was held to advance the P5 Process, which was established in 2009 to focus on such goals as increasing clarity about nuclear doctrines and strengthening strategic risk reduction.

According to the meeting communiqué, the five countries reviewed progress on issues related to the review conference. This included exchanging updates on their respective nuclear doctrines and policies, recognizing “their responsibility to work collaboratively to reduce the risk of nuclear conflict,” and communicating an intent “to build on their fruitful work on strategic risk reduction within the P5 Process throughout the course of the next NPT review cycle.”

On Dec. 7, the five countries also submitted to the review conference a working paper on strategic risk reduction, which they described as “complementary to the treaty’s overarching goals and… consistent with the nuclear-weapon states’ long-term efforts towards disarmament.”

The P5 Process last convened in person in February 2020. (See ACT, March 2020.) France chaired the process in 2021 and planned to continue that role through the review conference. The United States will take over as chair in 2022, although it is not clear when, given the conference postponement. (See ACT, March 2021.)