China is constructing at least 250 new long-range missile silos at as many as three locations, fueling concerns that it aims to substantially expand its nuclear weapons arsenal. Beijing’s rapid nuclear buildup, recently revealed through open-source intelligence analysis, could significantly impact the Biden administration’s Nuclear Posture Review and arms control and strategic stability talks between the United States and Russia. 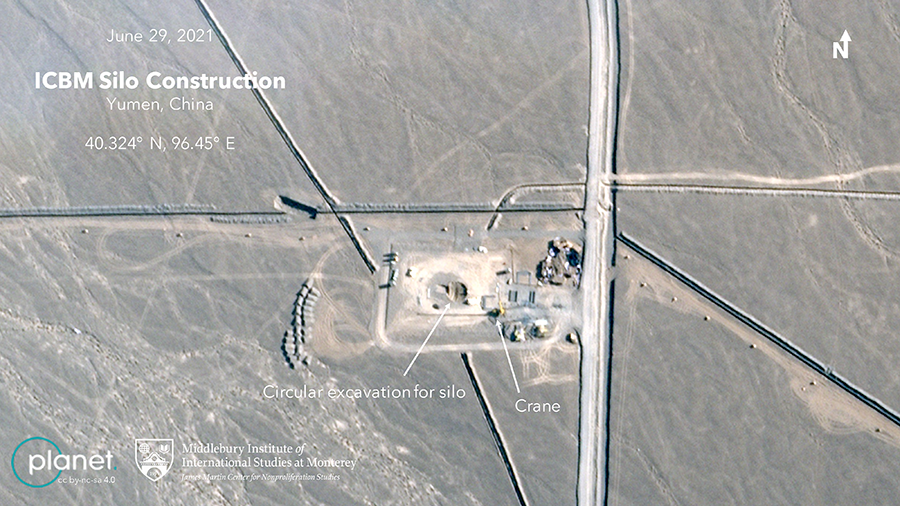 U.S. Secretary of State Antony Blinken expressed his concern with the “rapid growth” of China’s nuclear arsenal at an Aug. 6 meeting of foreign ministers at the ASEAN Regional Forum. He said this dramatic expansion indicates a sharp deviation from Beijing’s “decades-old nuclear strategy based on minimum deterrence,” according to a readout of the meeting by State Department spokesman Ned Price.

Adm. Charles Richard, commander of U.S. Strategic Command, called the development a “strategic breakout” by China. “The explosive growth and modernization of its nuclear and conventional forces can only be what I describe as breathtaking, and frankly, the word ‘breathtaking’ may not be enough,” he told the Space & Missile Defense Symposium in Huntsville, Ala., on Aug. 12.

China has yet to officially respond to the discovery of two new missile silo sites at Yumen and Hami in northwestern China in June and a potential third in Inner Mongolia in July. The Chinese Foreign Ministry told the Associated Press on July 30 that, with respect to reports about the Hami site, it was not aware of the situation.

China’s nuclear stockpile remains small in comparison to those of the United States and Russia and only grew by an estimated 30 warheads, to 350, between 2020 and 2021, according to a June 2021 report by the Stockholm International Peace Research Institute. The U.S. Defense Department’s 2020 military power report on China was more conservative, putting China’s nuclear warhead stockpile in the low 200s. (See ACT, October 2020.) Beijing currently has an estimated 20 silos for liquid-fueled intercontinental ballistic missiles (ICBMs).

Comparatively, the United States and Russia are believed to have nuclear stockpiles of about 4,000 warheads each.

Republicans in Congress said that the recent revelations confirmed reports during the Trump administration that China was speeding its nuclear buildup and that Beijing’s actions demand an accelerated modernization of the U.S. nuclear deterrent. Rep. Mike Turner (R-Ohio), ranking member on the House Armed Services strategic forces subcommittee, called China’s nuclear buildup “unprecedented” and suggested that China is “deploying nuclear weapons to threaten the United States and our allies.”

China’s nuclear posture has long been one of minimum nuclear deterrence, aimed at maintaining a small but technically sophisticated arsenal capable of a second-strike. Beijing has long asserted that it adheres to a no-first-use policy, meaning that it would only use nuclear weapons in retaliation for a first strike.

But the discovery of new missile silos provides some evidence for the claims made during the Trump administration that China aims to substantially expand the size of its nuclear arsenal in the coming years. In May 2019, Defense Intelligence Agency Director Lt. Gen. Robert P. Ashley Jr. predicted that, “over the next decade, China is likely to at least double the size of its nuclear stockpile in the course of implementing the most rapid expansion and diversification of its nuclear arsenal in China’s history.”

In April 2021, Lt. Gen. Scott Berrier, Ashley’s successor, shared his assessment that China is well poised to exceed that estimate. “China probably seeks to narrow, match, or in some places exceed U.S. qualitative equivalency with new nuclear warheads and their delivery platforms,” he told the Senate Armed Services Committee in a briefing on the annual worldwide threat assessment.

At the new missile silo fields at Yumen and Hami, which are located roughly 236 miles apart, Beijing has 229 missile silos under construction. Each site features silos placed about two miles apart in a grid-like pattern, spanning an area of about 300 square miles. The James Martin Center for Nonproliferation Studies at the Middlebury Institute for International Studies first identified the construction of an estimated 119 silos at the Yumen site, as reported by The Washington Post on June 30.

On July 26, the Federation of American Scientists announced its discovery of an additional 110 missile silos outside of Hami, on which construction had begun in March 2021. “The silo construction at Yumen and Hami constitutes the most significant expansion of the Chinese nuclear arsenal ever,” wrote Matt Korda and Hans Kristensen.

A potential third site, at Hanggin Banner, Inner Mongolia, was disclosed in a report on Aug. 12 that revealed construction of a silo field similar to those found at Yumen and Hami. According to Air University’s China Aerospace Studies Institute, a U.S. Air Force education institute that publicized the location, satellite imagery indicates construction of at least 29 new silos, 13 of which have dome shelters.

Experts suggest that China’s DF-41, a solid-fueled ICBM capable of carrying multiple nuclear warheads, may be destined for the silos at the new sites. It is uncertain, however, whether Beijing plans to fill every silo with a missile and how many warheads each missile will carry.

“Just because you build the silos doesn’t mean you have to fill them all with missiles,” Vipin Narang, a Massachusetts Institute of Technology professor, told The New York Times on July 26. “They can move them around.”

Employing such a shell-game strategy could be one of China’s motivations for constructing new missile silos. Alternatively, as suggested by Tong Zhao of the Carnegie-Tsinghua Center for Global Policy, leaders in Beijing may have adjusted their calculus to determine that “a bigger arsenal would make the country’s rivals respect China and exercise more self-restraint when dealing with Beijing.”

Although China once prioritized a sophisticated but small nuclear arsenal, Zhao suggests that recent evidence indicates Beijing “has become more willing to invest in quantity, in addition to its traditional focus on [the] quality” of its nuclear forces.

Caitlin Talmadge, an expert on Chinese nuclear issues at Georgetown University, shared her assessment July 1 on Twitter that “China is working hard to entrench [the United States] in a deeper state of mutual vulnerability” through its nuclear buildup.

“Beijing has a good ways to go still, but true nuclear stalemate would make it much more challenging for [the United States] to reassure [and] defend allies in the face of Chinese conventional threats,” she concluded.

U.S. defense officials are also watching to see if China will use its civilian nuclear power infrastructure to expand its weapons-grade fissile material stockpile. Richard warned in April that Beijing’s new nuclear power reactors “could change the upper bounds of what China could choose to do if they wanted to in terms of further expansion of their nuclear capabilities.” Nuclear infrastructure intended for civilian use could be maladapted for the production of weapons-grade material.

China’s rapid expansion has prompted questions about how it could affect arms control and strategic stability talks between the United States and Russia. Washington and Moscow kicked off the dialogue in July in Geneva.

The Trump administration pursued efforts in 2020 to bring China into trilateral arms control talks with Russia, but Beijing repeatedly refused. (See ACT, November 2020.) At one point, the Trump administration conditioned an extension of the 2010 U.S.-Russian New Strategic Arms Reduction Treaty (New START), which was set to expire in February 2021, on China’s involvement in a new trilateral arms control agreement. (See ACT, July/August 2020.)

Trump left office with the treaty’s future in doubt, but the Biden administration agreed to extend New START just days before its expiration. Even so, Blinken said on Feb. 3 that Washington will not only seek future arms control covering all Russian nuclear weapons, but also “pursue arms control to reduce the dangers from China’s modern and growing nuclear arsenal.”

On Aug. 10, Price echoed the secretary’s remarks after the silo field revelations, saying that “we encourage Beijing to engage with us on practical measures to reduce the risks of destabilizing arms races and conflict.”

The desire for a dialogue on strategic stability with China is shared by some U.S. military leaders. “A dialogue allows us to communicate our national security or diplomatic objectives, and then to understand Chinese national security diplomatic objectives,” said Maj. Gen. Michael Lutton, commander of the 20th Air Force, which has responsibility for the U.S. ICBM force, on Aug. 10. “I think it is beneficial to work with the Chinese.”

In addition to China’s construction of new missile silos, a July 30 report by National Public Radio revealed satellite images of the construction of a new tunnel and roads at Lop Nur, the former Chinese nuclear test site. The U.S. State Department has previously expressed concern that Beijing may be seeking to increase activities at Lop Nur. (See ACT, May 2021.)