May 2021
By Leanne Quinn and Julia Masterson

Member states of the world’s chemical weapons watchdog have voted to suspend Syria’s rights and privileges under the Chemical Weapons Convention (CWC) in an effort to hold that country accountable for repeated chemical weapons use. 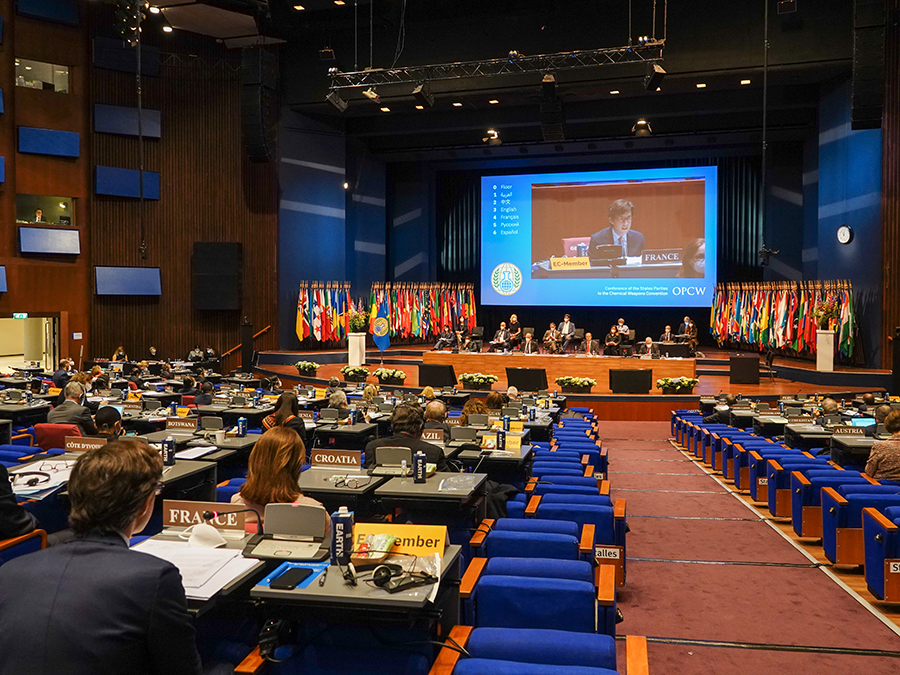 The decision, adopted April 21 by the Organisation for the Prohibition of Chemical Weapons (OPCW), marked a historic step toward restoring the global norm against chemical weapons. It was the first time the organization had suspended a member’s rights since the OPCW’s inception in 1997.

Led by France and supported by 46 member states, the move means that Syria's rights to vote, stand for election, and hold any office within the organization have been suspended. The measure, which required a two-thirds’ majority to pass, was adopted on a 87–15 vote at the second session of the 25th conference of the CWC in The Hague. Syria, China, and Russia, a major ally of the Syrian government, were among the nations opposed. There were 34 abstentions. Negotiations on a consensus proposal failed.

The decision came as no surprise. On April 12, the OPCW Investigation and Identification Team (IIT) released its report concluding that “there are reasonable grounds to believe” that on Feb. 4, 2018, a Syrian Air Force helicopter hit eastern Saraqib by dropping at least one cylinder that disbursed toxic chlorine gas over a large area.

The IIT’s first report, issued in 2020, found the Syrian Air Force responsible for three chemical weapons attacks on Syrian territory in March 2017, using sarin, a volatile nerve agent, and chlorine. The IIT was established in June 2018 with a mandate to identify the perpetrators of all instances of chemical weapons use in Syria.

Following that first report, the organization’s 41-member Executive Council condemned Syria for its documented and repeated use of chemical weapons. The council gave Syria 90 days to declare all of its chemical weapons and related facilities, as well as to resolve 19 outstanding issues regarding its facilities and stockpile declaration to the OPCW.

The council recommended that the conference take action pursuant to CWC Article 12, which provides that the conference may “restrict or suspend the State Party’s rights and privileges...until it undertakes the necessary action to conform with its obligations,” at its next meeting if Syria failed to meet the deadline. In October, OPCW Director-General Fernando Arias confirmed that Syria had not made progress toward meeting any of the mandates, setting the stage for this month’s action.

Joanna Roper, the UK ambassador to the organization, said the decision was “a measured response” to uphold the CWC provisions and the integrity of the oversight organization. Rania Alrifaiy, Syria’s delegate, urged member states to “reject the fabricated allegations” and vote against the draft to prevent the OPCW from being converted into a political tool.

Arias said, “[T]he conference of the states-parties reaffirmed that the use of chemical weapons is the most serious breach of the convention there can be, as people’s lives are taken or destroyed.” He added, “By deciding to address the possession and use of chemical weapons by a state-party, the conference has reiterated the international community’s ethical commitment to uphold the norm against these weapons.”

Many of the countries voting against the measure expressed concern about the perceived politicization of the OPCW and the legitimacy of the IIT. Some states also took issue with the motivation behind the decision and the voting procedures.

Russia, in particular, complained that the organization and its investigators exceeded their mandate. Vassily Nebenzia, Russia’s representative to the UN, alleged that the OPCW was being used as a political tool. “Our Western colleagues...attempt to mobilize public opinion against Syrian authorities with a sole purpose, and it is not about upholding the nonproliferation regime. It is all about regime change.” But other countries defended the impartiality and integrity of the organization’s technical experts.

The latest report considered various hypotheses as to how the incident occurred, including Syria’s claim that it was staged by terrorist groups. The investigation found those leads were “not supported by any concrete evidence” and appeared to be based on conclusions that involved materials the Syrian government did not share with the IIT, despite requests for access.

The Syrian Foreign Ministry condemned the report and “categorically denies its use of poison gas in the town of Saraqib or any other Syrian town or village.”

During the April conference, 58 member states also issued a joint statement that “condemn[ed] in the strongest possible terms the use of a toxic chemical as a weapon in the Russian Federation against Alexei Navalny,” the Russian political dissident who was attacked in August 2020 on a domestic airplane flight in Russia. They reaffirmed that “any poisoning of an individual with a nerve agent is considered use of a chemical weapon” and that “the use of chemical weapons anywhere, at any time, by anyone, under any circumstances is unacceptable and contravenes international standards and norms against such use.”

The OPCW collected biomedical samples from Navalny in September and determined he had been exposed to a toxic chemical of the Novichok family.

Novichok is a form of nerve agent, and certain Novichok agents are included on the CWC Schedule 1 annex on chemicals, which demarcates those chemicals as banned under the treaty. The agent that sickened Navalny is not included on that list, but the use of any chemical as a weapon is expressly prohibited by the CWC.

The 58 states committed to stay engaged with the issue until the OPCW investigation into Navalny’s poisoning is resolved. “It is our firm conviction that those responsible for the use of chemical weapons must be held accountable,” the members concluded. The OPCW Executive Council is due to meet July 6–9, when Navalny’s poisoning will again be discussed.