Iran’s stockpile of low-enriched uranium continues to expand, according to a Nov. 11 report by the International Atomic Energy Agency (IAEA). Tehran has now accumulated 2,443 kilograms of uranium enriched up to 4.5 percent, roughly 12 times the limit of 202 kilograms of 3.67 percent enriched uranium set by the 2015 nuclear deal, known formally as the Joint Comprehensive Plan of Action (JCPOA). 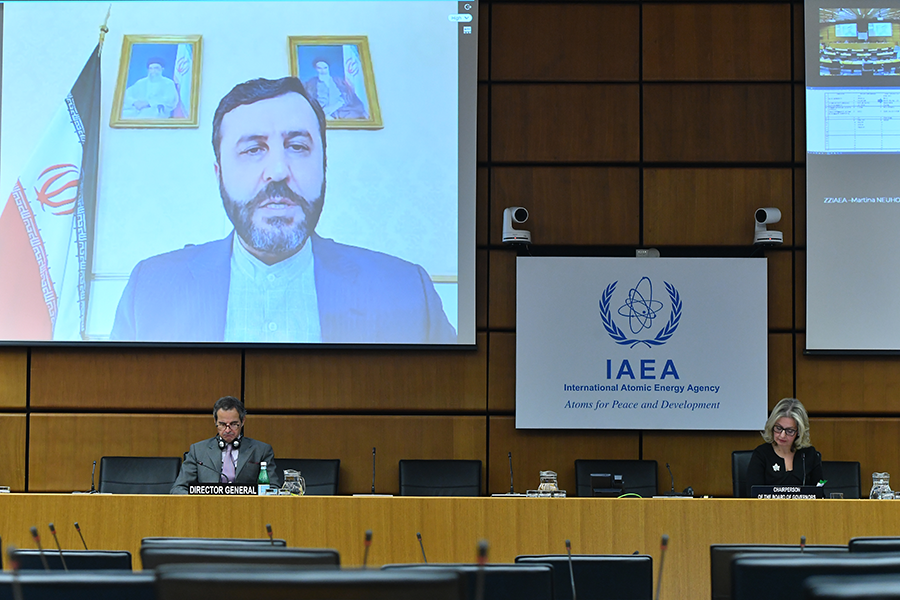 The latest quarterly report describes these ongoing JCPOA breaches and suggests that Iran is moving carefully to avoid steps that could impede a U.S. reentry to the nuclear deal or its own future return to full compliance with the accord. The Trump administration withdrew from the deal in 2018, and Iran has subsequently exceeded a number of the agreement’s limitations.

The IAEA report states that Iran’s enriched uranium production has slowed significantly over the last quarter when compared to the previous three reporting periods. Tehran produced 338 kilograms of enriched uranium over the last quarter, down from 533 kilograms in June–September 2020 and the smallest increase in a year. Iran has also not taken any additional steps to violate the accord since announcing in January 2020 it would no longer be bound by any of the deal’s operational restrictions. (See ACT, January/February 2020.)

Nevertheless, frustration with the nuclear deal appears to be mounting in Tehran. The Iranian Parliament voted on Nov. 3 to approve provisionally a bill requiring the Atomic Energy Organization of Iran to enrich uranium up to 20 percent at the Fordow facility and to take other steps in further violation of the nuclear deal. Although the resolution is not binding, it could signal an effort by Iranian lawmakers to pressure the incoming Biden administration to reenter the nuclear deal quickly and without conditions.

In addition, Iran continues to operate advanced centrifuges in violation of the JCPOA, but the Nov. 11 report details Iran’s decision to transfer cascades of centrifuges from the pilot plant to the main enrichment hall at Natanz instead of building three new equivalent cascades, as it had previously announced. In July, Tehran notified the IAEA that it would move three cascades comprised of IR-2m, IR-4, and IR-6 centrifuges to the Natanz enrichment facility. But in September, the IAEA reported that Iran would instead construct three new cascades at Natanz and that it would cease operation of the corresponding machines at the pilot plant.

Iran’s decision to duplicate its IR-2m, IR-4, and IR-6 cascades was worrisome in part because it would have left Iran with additional advanced centrifuges to use in the event that it chose to accelerate its production of enriched uranium. Moving the existing cascades from the pilot plant to the enrichment hall reduces the total number of centrifuges that could have been installed in Iran.

The Nov. 11 report indicates that only the cascade of IR-2m centrifuges had been moved to the Natanz enrichment hall and that they were not yet enriching uranium. One week later, however, in his Nov. 18 remarks to the agency’s Board of Governors, IAEA Director-General Rafael Mariano Grossi noted the release of a new report containing an update on Iran’s nuclear activities. That report has not been made public, but a section from the report quoted in a Nov. 18 article by Reuters outlines that, on Nov. 14, the IAEA “verified that Iran began feeding [uranium hexafluoride gas] into the recently installed cascade of 174 IR-2m centrifuges” at Natanz.

Kazzem Qaribabadi, Iranian ambassador and permanent representative to the IAEA, confirmed the information on Nov. 18.

The enrichment of uranium using IR-2m machines at Natanz marks another violation of the JCPOA, which dictates that Iran operate only 5,060 first-generation IR-1 centrifuges at that facility. In her Nov. 18 statement before the Board of Governors, U.S. Ambassador to the United Nations Jackie Wolcott condemned Iran’s decision to enrich uranium with IR-2m centrifuges at Natanz and urged Tehran to “reverse these steps immediately.”

As noted in the Nov. 11 report, Tehran informed the agency that the decision to move the centrifuges was made “with the aim that eventually all of the enrichment [research and development] activities will be concentrated in this area,” but it is possible that Iran was also motivated to move the cascades after an apparent act of sabotage on its centrifuge assembly facility in July caused significant damage to its advanced machines. The Natanz enrichment hall is underground and presumably more protected from sabotage attacks.

Iran has since begun construction of a building to replace the centrifuge assembly facility at Natanz that was damaged during the July attack although that new facility is not mentioned in the IAEA report. But Grossi made clear during an Oct. 27 interview that the IAEA is monitoring Iran’s construction activities at Natanz, indicating that Iran is committed to maintaining compliance with its safeguards agreement.

The IAEA has “not observed any change in the level of cooperation by Iran,” according to the Nov. 11 report, which outlines that Iran continues to provisionally implement an additional protocol to its safeguards agreement and is cooperating with the continuous monitoring measures put in place by the nuclear deal.

The IAEA generally does not disclose information related to Iran’s comprehensive safeguards agreements in its quarterly monitoring reports, but the Nov. 11 report notes Iran’s failure to provide a satisfactory response to the IAEA investigation into isotopically altered uranium particles found during a visit to an undeclared site in February 2019. The agency has made clear that these particles date to before 2003, when Iran was assessed by the IAEA to have had a nuclear weapons program.

The Nov. 11 report details that although Iran told the IAEA on Oct. 21 that “the evidence of such contamination is under investigation” and later provided more information to the agency in a Nov. 5 letter, Iran’s response was “not technically credible” and so far has been unsatisfactory.