Syria failed to meet the deadline to declare the remainder of its chemical weapons stockpile to the Organisation for the Prohibition of Chemical Weapons (OPCW), according to an Oct. 14 report by the global chemical weapons watchdog. 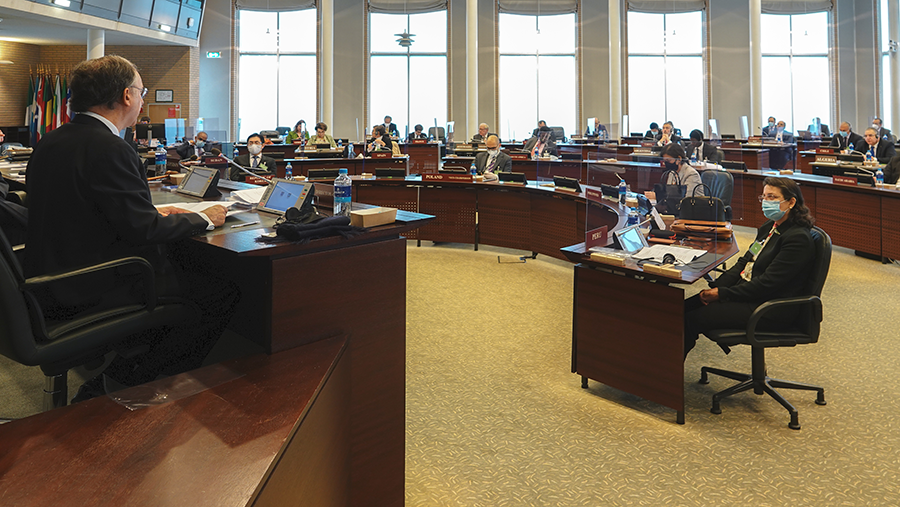 That deadline was mandated by a July 9 decision of the OPCW Executive Council obligating Syria to declare the totality of its chemical weapons program, including the facilities where precursors, munitions, and devices are stockpiled and assembled, within 90 days. (See ACT, September 2020.)

Chemical weapons have continued to be used in Syria despite the destruction of the nation’s declared stockpile accompanying its accession to the Chemical Weapons Convention (CWC) in 2013. The council’s July decision followed an inaugural April 8 report by the OPCW Investigation and Identification Team (IIT) that attributed responsibility for a series of chemical weapons attacks using sarin and chlorine in March 2017 to the Syrian air force. (See ACT, May 2020.)

The council’s decision called on Syria to declare, specifically, sarin, sarin precursors, and chlorine not intended for civilian use. Sarin is a treaty-banned agent, and states are barred from producing, stockpiling, or using the nerve agent under any circumstances. Chlorine is not a chemical agent explicitly banned by the convention because it has civilian applications, but the treaty’s general-purpose criterion prohibits the use of any chemical as a weapon. Treaty members are not ordinarily required to declare or destroy any chlorine in their possession, but Syria is an exceptional case given that the IIT confirmed that the Syrian air force used chlorine in attacks.

According to the new OPCW report, Director-General Fernando Arias sent a letter to the Syrian deputy foreign minister outlining Syria’s obligations established by the council’s decision. Arias professed a readiness by the OPCW Technical Secretariat to support Syria in its fulfillment of the prescribed mandate, but the Syrian Foreign Ministry did not respond to the letter.

The OPCW report notes that although Syria failed to meet the 90-day deadline to declare the remainder of its chemical weapons stockpile and associated facilities, “the secretariat will continue to implement all of its mandates with regard to the Syrian chemical weapons program.”

Next steps may be taken in accordance with the council’s July decision to recommend action under Article XII of the CWC at the next conference of states-parties. That article outlines a series of steps to redress a situation that ultimately ends in referral to the United Nations. It states that in cases where a state-party fails to fulfill an Executive Council request with regard to its compliance with the treaty, “the conference may, inter alia, upon the recommendation of the Executive Council, restrict or suspend the state-party’s rights and privileges under this convention until it undertakes the necessary action to conform with its obligations under this convention.”

Those rights and privileges are not explicitly named by the convention, but could include a loss of voting privileges and a moratorium of technical assistance under the CWC, among other things.

The states-parties are scheduled to meet next from Nov. 30 to Dec. 4, and British Foreign Minister Dominic Raab tweeted on Oct. 14 that the United Kingdom will initiate such action at the upcoming conference. “Chemical weapons use must end,” he said.

The Oct. 14 report also states that the secretariat will share its findings with the UN Security Council, which possesses the authority to impose more punitive consequences.

Damascus has denied all allegations of involvement in the ongoing use of chemical weapons in Syria. According to a Sept. 29 story by the Syrian Arab News Agency, “Syria has fulfilled its obligations since its accession to the [CWC,] and it has destroyed all of its stockpile since the year 2014.”

But an Oct. 6 analysis by Foreign Policy of an unpublished U.S. State Department report for Congress reveals a U.S. assumption that Syria intends to rebuild its chemical weapons stockpile and its production capabilities. The State Department reportedly conveyed its assessment that Syria is “seeking to reestablish strategic weapons production capabilities it lost in the course of the [civil war] conflict” and that “Syrian procurement activity in support of its chemical weapons and missile programs” is ongoing.

Despite mounting frustration among those in the international community seeking to hold Syrian officials accountable for the ongoing reprehensible use of chemical weapons in violation of international law and the CWC, there is evidence to suggest a growing movement to prosecute those responsible. In Germany, where there is universal jurisdiction permitting prosecution for crimes against humanity committed worldwide, a group of Syrian survivors filed criminal complaints against ranking officials of the Syrian government and armed forces for their involvement in the ongoing chemical weapons attacks.

According to an Oct. 6 Reuters article, the effort represents “a rare legal avenue for action against the government of [Syrian] President Bashar al-Assad.” This is because earlier attempts to establish an international tribunal to prosecute Assad for war crimes have been blocked in the UN Security Council by Russia and China.

The UN International, Impartial, Independent Mechanism (IIIM) tasked with the investigation of crimes committed in violation of international law in Syria has existed since 2011, but it lacks authority to actually prosecute those responsible. The IIIM mandate, however, calls for collecting evidence to assist in the criminal proceedings of those tried in national and international courts or tribunals, and the Executive Council’s July 9 decision welcomed a memorandum of understanding between the OPCW and the IIIM.

It remains to be seen whether the OPCW will play a role in the forthcoming legal action taken in accordance with the criminal complaints filed in Germany.