“[My time at ACA] prepared me very well for the position that I took following that with the State Department, where I then implemented and helped to implement many of the policies that we tried to promote.”
– Peter Crail
Business Executive for National Security
June 2, 2022
Coronavirus Affects U.S. Nuclear Forces

As the coronavirus pandemic continues to sweep the nation, the Defense Department is taking special measures to ensure the continued readiness of U.S. nuclear forces. 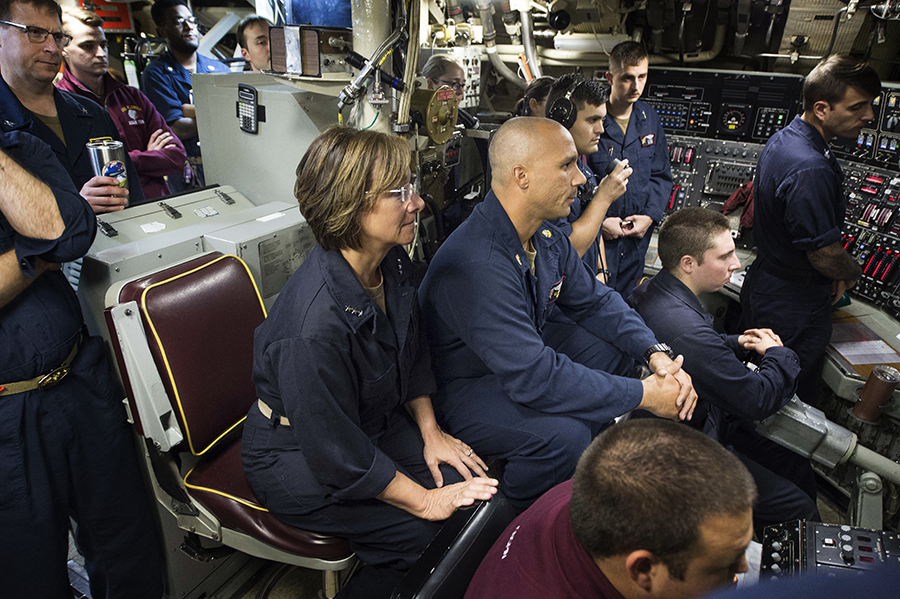 Department officials have expressed confidence that these steps have helped to ensure that the virus does not compromise the ability of the nuclear arsenal to perform its intended mission.

But over time, the rising human and financial toll inflicted by the disease could exacerbate the affordability and execution challenges facing the government’s ambitious plans to sustain and modernize U.S. nuclear delivery systems and warheads and their supporting infrastructure. (See ACT, March 2020.)

Adm. Charles Richard, the commander of U.S. Strategic Command, told reporters March 17 that “our strategic nuclear forces remain ready to execute the nation's strategic deterrence mission” and “to this point, we have had no impact to our ability to accomplish our mission.”

In the ensuing weeks, Pentagon officials have detailed some of the protocols that have been put in place to safeguard the health of U.S. military personnel that operate nuclear delivery systems.

Gen. Mark Milley, the chairman of the Joint Chiefs of Staff, said on April 14 that the crews of 12 deployed ballistic missile submarines “are going into isolation” for 14 days and “are being tested prior to setting sail, as tests become available.”

The Air Force has also adjusted “operations in the nuclear missile fields,” Gen. David Goldfein, the chief of staff of the service, told Air Force Magazine on April 15.

Goldfein said that the crews for Minuteman III intercontinental ballistic missiles (ICBMs) are now spending 14 days or more at their posts, compared to two or three days at a time previously. All of the roughly 400 deployed U.S. ICBMs are maintained in a state of launch-ready alert, meaning they can be launched within minutes of a decision by the president to do so.

“We’re operating in what we call the new abnormal, operating with the virus,” Goldfein said. He told reporters during a virtual press conference on April 22 that no ICBM or nuclear bomber crews have tested positive for the virus.

The Pentagon announced that day that it is instituting a tiered system for testing personnel for the virus, with top priority given to personnel supporting “critical national capabilities like…our nuclear deterrent.”

As of the end of April, the Defense Department reported nearly 7,000 total cases of the coronavirus among department personnel, dependents, and contractors had tested positive for the coronavirus, with hundreds of new cases being reported every day.

The Pentagon in late March stopped reporting the number of positive cases at individual bases and installations. As of early April, more than 150 bases in 41 states had positive cases, including nearly every base that hosts U.S. nuclear delivery systems, according to an April 9 Newsweek report.

The Energy Department’s semiautonomous National Nuclear Security Administration (NNSA) reported 40 active cases of the virus at the agency as of the end of April. Nearly all NNSA production facilities had reduced to a minimum mission-critical level of operations as of mid-April, Exchange Monitor Publications reported on April 10. Mission-critical employees include the personnel needed to assemble nuclear weapons and components, maintain key infrastructure, or provide security.

Although U.S. nuclear forces personnel to have largely avoided the virus, the threat to worker safety and health posed by the disease is straining the defense industrial base and is likely to prompt schedule delays to major defense acquisition programs.

Ellen Lord, undersecretary of defense for acquisition and sustainment, told reporters on April 20 that the Defense Department is “seeing the greatest impacts in the aviation supply chain, ship-building, and small space launch.”

She added that the department projects “about a three-month slowdown at slower rates in terms of execution” for major acquisition programs and is “just now looking at key milestones that might be impacted.”

Lord said the Pentagon is planning to ask Congress for “billions and billions” in additional funding as part of a future emergency stimulus package for fiscal year 2020 to address possible schedule delays.

The potential impact of workforce and supplier slowdowns on the Pentagon’s nuclear delivery system modernization programs remains to be seen.

“We are confident the services, along with industry partners, are able to keep production related to modernization of our nuclear forces on track, while taking appropriate precautions to keep their workforces safe and healthy,” Richard said in March.

But the Congressional Research Service warned in March that the risks of delays at shipyards could be particularly problematic for the program building a new fleet of Columbia-class ballistic missile submarines, due in part to the “tight schedule for designing and building the lead boat.”

Meanwhile, the Air Force is slated to award a contract to Northrop Grumman to begin development of a new ICBM system via the Ground-Based Strategic Deterrent (GBSD) program before the end of the summer. (See ACT, October 2019.)

Will Roper, the assistant secretary of the Air Force for acquisition, technology, and logistics, said on April 16 that the Air Force might actually award the GBSD development contract earlier than planned.

At the NNSA, major warhead and infrastructure modernization programs are continuing as planned, a congressional source told Arms Control Today.

In the longer term, many prominent defense experts believe that the financial havoc wreaked by the coronavirus will prompt reductions in military spending. Such cuts could increase the financial burden of the Trump administration’s nuclear modernization plans.

The administration is requesting $44.5 billion in fiscal year 2021 for nuclear weapons sustainment and modernization, an increase of about $7.3 billion, or 19 percent, from the fiscal year 2020 level.

Kori Schake, director of foreign and defense policy studies at the American Enterprise Institute, predicted on April 6 that “we are going to see enormous downward pressure on defense spending because of other urgent American national needs like health care that the pandemic is going to raise.”

Pentagon officials, however, maintain that nuclear modernization will remain a top priority even amid declining defense budgets.

“As the budget comes down, there will be more tough choices ahead,” Roper said. “My worry—concern—is less about any program in the nuclear triad. It’s more outside of that: Where would we find that bill payer?”