The United States is open to meeting with the other permanent members of the UN Security Council to discuss nuclear arms control and will soon put forward a trilateral arms control proposal with Russia and China, President Donald Trump said in February. China, however, has continued to express its opposition to trilateral talks with Russia and the United States, and it has not yet responded to U.S. overtures to begin a bilateral strategic security dialogue. 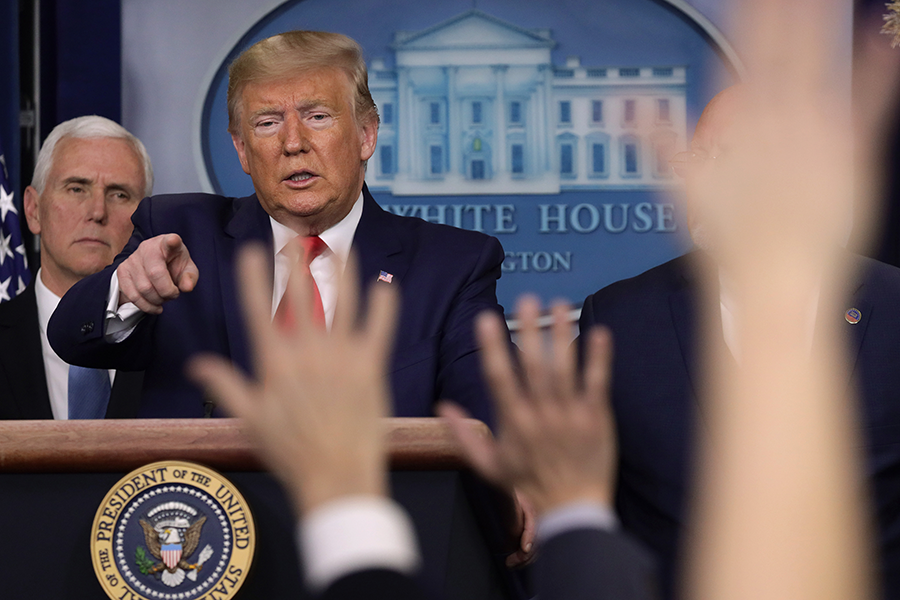 At the same time, the Trump administration continued to deflect questions about its stance on the New Strategic Arms Reduction Treaty (New START), which is due to expire in 2021.

Trump told reporters on Feb. 29 that Russia, China, the United Kingdom, and France “all want to now discuss arms control” and that the leaders of those countries will likely discuss the subject at the UN General Assembly in New York in September.

Russian President Vladimir Putin first proposed the idea of a summit of those nations earlier this year to discuss a broad range of security topics, including arms control. “We have discussed this with several of our colleagues and, as far as I know, have received a generally positive response to holding a meeting of the heads of state of the five permanent members of the UN Security Council,” Putin stated during a late January trip to Israel.

In a March 5 statement commemorating the 50th anniversary of the entry into force of the nuclear Nonproliferation Treaty, Trump said he “will be proposing a bold new trilateral arms control initiative with Russia and China to help avoid an expensive arms race and instead work together to build a better, safer, and more prosperous future for all.”

Trump, who first proposed a trilateral approach to arms control nearly a year ago, said such an approach is needed because, “[o]ver the next decade, China seeks to at least double the size of its nuclear stockpile while Russia is developing expensive and destabilizing new types of delivery systems.” (See ACT, May 2019.)

Neither the president nor other officials have provided a timeline for when the administration might release a proposal.

Nevertheless, “we’re optimistic that it will be possible to engage both with Russia and with China, and to bring those bilateral engagements forward into a trilateral engagement that will ultimately result in the kind of agreement that President Trump has tasked us with trying to come to,” a senior State Department official told reporters on March 9. “So we are cautiously optimistic and hope very much to be engaged with both, not just one, of those two parties in the very near future,” the official added.

Beijing, however, has continued to express no interest in a trilateral approach. “China has repeatedly reiterated that it has no intention of participating in the so-called trilateral arms control negotiations,” a Chinese Foreign Ministry spokesman said on March 6.

China has yet to respond to the offer. A Chinese Foreign Ministry spokesman said on March 6 that “China is always open to bilateral exchange with the U.S. in the field of strategic security.”

The Trump administration’s continued pursuit of arms control discussions with Russia and China comes as the clock continues to tick toward the February 2021 expiration of New START. The United States and Russia can exercise the option to extend the agreement by up to five years by mutual agreement.

The administration has yet to make its decision regarding the future of the accord. The senior State Department official said the administration is evaluating a decision on extension in the context of whether prolonging New START aids or sets back the pursuit of limits on additional types of Russian nuclear weapons not covered by the treaty and bringing China into the arms control process.

“We are not forecasting what that answer is,” the official said.

The official added that there remains plenty of time to extend the treaty before it expires and that an extension could be quickly accomplished with “nothing more than an exchange of diplomatic notes.”

Defense Secretary Mark Esper said on Feb. 19 that if the United States chooses to extend New START, then a new agreement should “capture the new Russian strategic weapons. I also believe that the Russians should bring underneath that treaty the nonstrategic nuclear weapons. And then, of course, the Chinese.”

Moscow has expressed its readiness to extend New START immediately and without any preconditions, but warned that time is running out and any proposal to include Russian weapons not covered by the treaty would require an amendment to the agreement. (See ACT, January/February 2020.)

Vladimir Leontyev, deputy director of the Russian Foreign Ministry’s Department for Non-Proliferation and Arms Control, said in February that the United States rejected a proposal from Russia to hold “a lawyers’ meeting to…work out an understanding of the technical aspect of the extension process.”

“No follow-up agreement is in sight, and it is clear that there is no chance of producing anything meaningful over the time left” before the treaty expires, Leontyev noted.

Russia has also maintained that it “will not try to convince China” to join trilateral talks, according to Russian Foreign Minister Sergey Lavrov. “If the Americans are quite sure that it makes no sense to take any further steps on the New START…without China, let them get down to business on this all on their own,” he said on Feb. 10.

A reported hindrance to the U.S. effort to negotiate a more comprehensive replacement for New START has been the Trump administration’s inability to find a lead negotiator for the undertaking. Politico reported on Feb. 12 that the administration has offered the role to several potential candidates but struggled to find someone to take it. The Guardian reported on March 4 that the White House had chosen Marshall Billingslea, the current assistant secretary for terrorist financing at the Treasury Department, for the role.

New START caps U.S. and Russian strategic nuclear arsenals at 1,550 deployed warheads, 700 deployed missiles and heavy bombers, and 800 deployed and nondeployed missile launchers and bombers each. It also put into place a rigorous inspections and verification regime, on which the U.S. military relies for knowledge about the Russian arsenal.