“The Arms Control Association and all of the staff I've worked with over the years … have this ability to speak truth to power in a wide variety of venues.”
– Marylia Kelley
Tri-Valley Communities Against a Radioactive Environment
June 2, 2022
NPT Review Conference Postponed

The global coronavirus disease (COVID-19) pandemic has forced a postponement of the 10th review conference of the nuclear Nonproliferation Treaty (NPT), possibly until early 2021. Originally scheduled to be held at UN headquarters in New York from April 27 until May 22, the conference typically involves hundreds of representatives from most of the 191 states-parties to the treaty, as well as nongovernmental organizations and meeting support personnel. The conference caps off a five-year cycle of meetings through which states-parties review implementation and compliance with the treaty and seek agreement on action steps to overcome new challenges and to fulfill core goals and objectives. 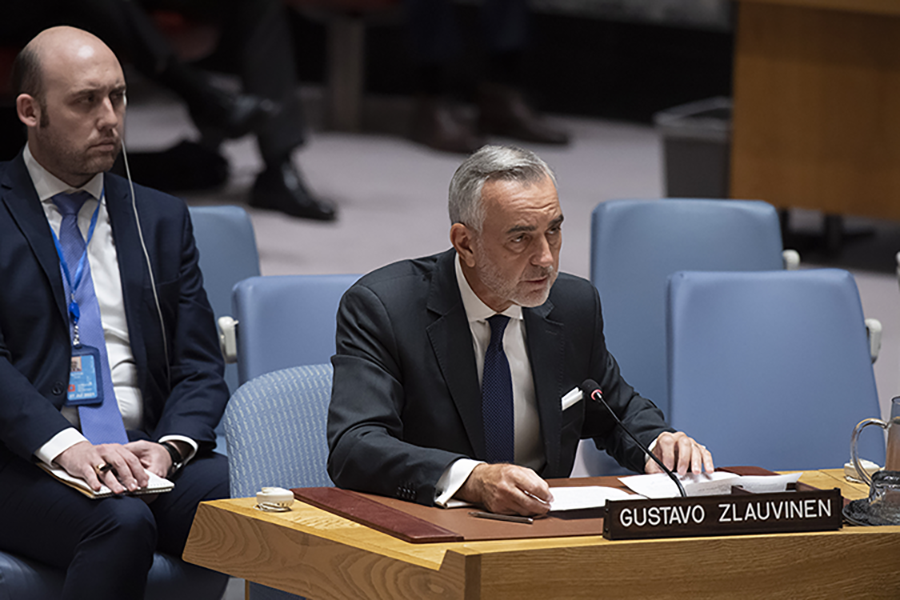 In a March 26 interview with Arms Control Today, conference president-designate Gustavo Zlauvinen of Argentina said that after extensive consultations, he circulated a proposal on March 25 to NPT regional groups to postpone the review conference “until such time as conditions permit, but not later than April 2021.”

Zlauvinen said his communication explained that because the pandemic makes it impractical to hold meetings at the present time, the only way for states-parties to express their agreement on a decision to postpone the review conference is to do so in writing, and he requested responses by March 27.

All other related preparatory meetings and consultations, including plans for NPT workshops in Jordan, Mexico, and Thailand, have been postponed. A U.S.-hosted third working group meeting for the Creating an Environment for Nuclear Disarmament initiative, planned for April 8–9 in Washington, has also been postponed.

In March, as the scale and scope of the pandemic grew, Zlauvinen said he began discussing conference options with senior UN officials and NPT states parties, including the UN secretary-general on March 4. On March 13, he circulated a proposal to delegations calling for the conference to be “suspended” until a later date after a short procedural meeting on April 27 to elect a conference officers and possibly to agree on a program of work, if conditions allowed.

Given the importance of the NPT, Zlauvinen said he initially wanted to hold the meeting on April 27 to provide a strong “symbolic” start to the review conference and to “maintain the integrity” of the review process. The conference had originally been scheduled to begin the same day.

As the COVID-19 outbreak worsened in New York, however, the prospects of an in-person procedural meeting on April 27 became untenable, Zlauvinen said.

Another option explored was to use video conferencing to hold the April 27 meeting, he said, but that arrangement could have led to technical difficulties for some states, including potential problems regarding procedures and voting. He also said that there were differing views among states-parties about selecting a date for resuming the conference, with some seeking rescheduling in early 2021, others in the late-fall of 2020, while others proposed an earlier date.

According to a Xinhua news report in March, the Non-Aligned Movement of 120 member states decided on March 12 to recommend postponing the review conference to April and May of next year, saying it is too important to hold on a smaller scale at an earlier date.

Taking these factors into account, Zlauvinen came to the conclusion that he should recommend to states-parties that the meeting should be postponed until such time as it is possible for “the review conference to undertake its important work.” The UN publicly confirmed the postponement on March 27.

When the review conference will be held remains unclear. In addition to the uncertainties about the duration of the pandemic, Zlauvinen said that another complicating factor is that the UN conference facilities in New York are almost completely booked with other official events, including rescheduled events, for the next several months.

Preparations for the review conference have experienced other unexpected turns. Last year, the preparatory meeting for the 2020 review conference tapped veteran Argentine diplomat Rafael Grossi as president-designate for the meeting. In late 2019, however, he was selected to become the new director-general of the International Atomic Energy Agency (IAEA).

In his place, Argentina put forward Zlauvinen, who is a deputy foreign minister and has a long track record on nonproliferation matters. He served as the IAEA representative to the United Nations in New York for nearly eight years and was an alternate head of the IAEA’s NPT delegation from 2002 to 2009.

The NPT, which marked its 50th anniversary of entry into force on March 5, obligates the five nuclear-weapon states recognized by the treaty not to help non-nuclear-weapon states develop or acquire nuclear weapons, it obligates the non-nuclear-weapon states to forswear the pursuit of such weapons, it acknowledges the “inalienable right” of states-parties to the peaceful use of nuclear energy under safeguards, and the treaty commits states-parties to “pursue negotiations in good faith on effective measures relating to cessation of the nuclear arms race at an early date and to nuclear disarmament, and on a treaty on general and complete disarmament under strict and effective international control.”

The challenges facing the treaty have grown in recent years, especially since 2015 when NPT states-parties failed to reach agreement on a final document at that year’s review conference. Many non-nuclear-weapon states have also argued that key benchmarks agreed to at the historic 1995 review and extension conference and the successful 2010 review have not been met by the nuclear-weapon states.

At a UN Security Council session on nuclear nonproliferation issues convened by Germany in New York in February, the High Representative for Disarmament Affairs Izumi Nakamitsu warned that “relationships between states, especially nuclear-weapon states, are fractured.”

“The specter of unconstrained nuclear competition looms over us for the first time since the 1970s. We are witnessing what has been termed a qualitative nuclear arms race, one not based on numbers but on faster, stealthier and more accurate weapons. Regional conflicts with a nuclear dimension are worsening, and proliferation challenges are not receding,” she said.

“I hope the review conference can serve as a springboard for thinking on how to address the nuclear weapons challenges of our time,” Nakamitsu told the council.

“Obviously the NPT is not on the top of the priority list for our governments right now. The pandemic is, and rightly so. Once we resolve the issue of the postponement and once travel restrictions are lifted, I plan to continue the series of regional seminars on the three pillars of the NPT that my predecessor, Ambassador Grossi, started, as well as my personal consultations with states-parties in Geneva, Vienna, in New York, and in other capitals,” Zlauvinen said.

“Once we can move back into the important discussions on all of the issues relating to the NPT, I hope the states-parties can think like a community and find common solutions to common challenges,” Zlauvinen added. “The coronavirus is an invisible enemy.... Nuclear weapons are also a kind of invisible threat that most nonexperts don’t think about in their everyday lives. These are both global challenges that require global solutions.”