Editor's Note: This article was republished on March 3, 2020, to clarify information about the OPCW's investigation and the Russian challenge to that investigation. The updated version also corrects an earlier error describing the number of inspectors dissenting to the OPCW findings.

Russia called a special UN meeting in January to challenge an international finding that a chlorine-based chemical weapon was used in Douma, Syria, in April 2018. The March 2019 assessment made by a fact-finding mission of the Organisation for the Prohibition of Chemical Weapons (OPCW) was based on environmental samples, interviews, and months of technical analysis. 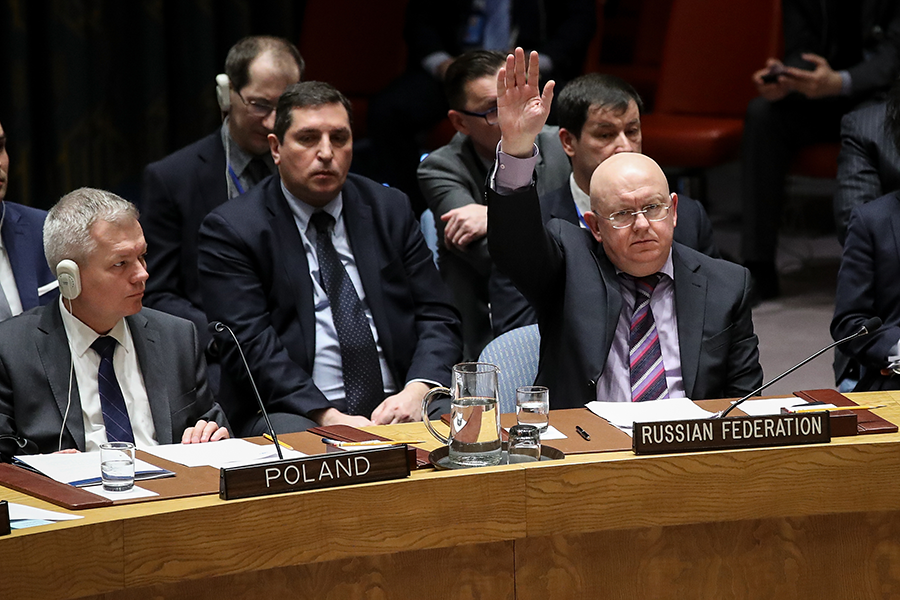 Russia has undertaken a campaign to criticize the assessment, which did not assign responsibility for the attacks, and convened a so-called Arria-Formula meeting at the United Nations in New York on Jan. 20. Arria-Formula meetings offer a unique avenue for UN Security Council members to discuss important issues outside of the council’s formal proceedings. Soon after the Douma attacks, Russia’s OPCW representative, Alexander Shulgin, said that “no evidence of a chemical weapon attack in Douma has been found.” Shulgin expanded on Moscow’s conclusion at the Jan. 20 Arria-Formula meeting, asserting that chlorine cylinders found at the scene had been staged for political provocation.

At the OPCW, Russia’s attempt to wage an information campaign over the findings of the March 2019 report has had limited impact, namely because “within the confines of the OPCW…both the staff of the Technical Secretariat and members of most state-party delegations have high levels of knowledge and expertise,” Jean Pascal Zanders, a veteran researcher, told Arms Control Today.

Russia’s call for an Arria-Formula meeting broadened its information campaign by targeting those perhaps less informed than OPCW staff and delegates. “Taking the matter to the UN in New York means that a different audience that is less familiar with the allegations and the investigative procedures and forensics could be influenced,” Zanders said.

Although Arria-Formula meetings are informal and generally off the record, a statement published by the U.S. mission to the UN said that the United States attended the meeting and “categorically objects to Russia’s blatant attempt to use a Security Council meeting to weaken the credibility of the OPCW and its findings on the Douma attack.”

Russia is not alone in its attempt to question the OPCW findings. A February 2019 document titled “Engineering Assessment of Two Cylinders Observed at the Douma Incident,” leaked by a dissenting OPCW inspector involved in the early stages of the Douma investigation, alleges that the cylinders found at the scene of the Douma attack “were manually placed…rather than being delivered from aircraft.” Another inspector anonymously leaked internal OPCW emails that he claimed demonstrated that the organization’s investigation of the Douma attack was flawed. One of the inspectors, Ian Henderson, suggested at the Arria-Formula meeting that there may not have been a chemical attack at all.

The online investigative journalism site Bellingcat and other independent experts and journalists who have reviewed these leaked documents have concluded that they do not undermine the conclusions of the FFM’s final report on the Douma incident.

As a result of the leaks, the OPCW launched an independent, external investigation into these breaches of confidentiality and released its results on February 6. OPCW Director-General Fernando Arias reaffirmed his support for the FFM report’s conclusions while criticizing the dissenters’ allegations. “Their conclusions are erroneous, uninformed, and wrong,” Arias said at a Feb. 6 briefing.