Since 2017, the Trump administration has sought to expand the role and capability of the U.S. nuclear arsenal while withdrawing the United States from key agreements designed to reduce nuclear dangers. 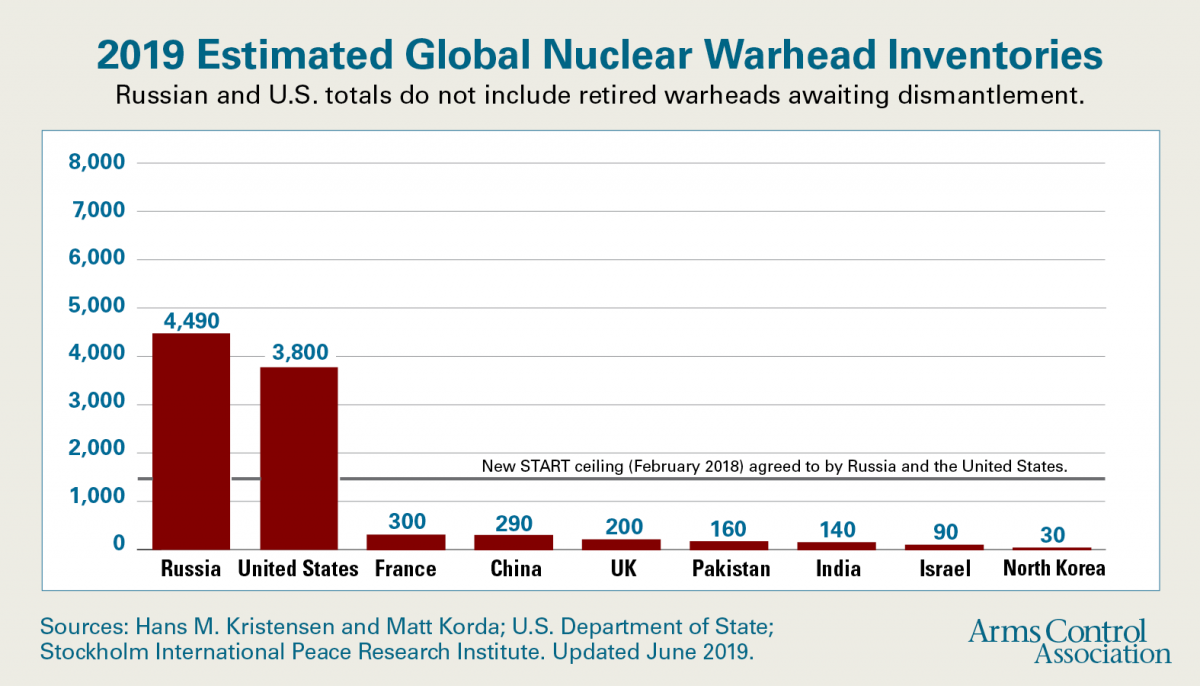 At the same time, President Donald Trump claims he wants to negotiate a nuclear arms control deal with Russia and with China, which has never been part of a nuclear arms limitation treaty.

Nuclear weapons are certainly very costly and dangerous, and there are no winners in a nuclear arms race. But contrary to what the president may believe, Washington is not actively engaging with Moscow or Beijing on a nuclear disarmament deal and does not appear to have a viable plan for doing so.

Worse yet, Trump’s advisers have spurned Russian offers thus far to talk about extending the only existing treaty that does cap the deadly strategic arsenals of the world’s two largest nuclear actors: the 2010 U.S.-Russian New Strategic Arms Reduction Treaty (New START), which is due to expire in February 2021.

In remarks at the United Nations last month, Thomas DiNanno, deputy assistant secretary of state for defense policy, emerging threats, and outreach, asserted that “we need a new era of arms control, one in which Russia and China are at the negotiating table and willing to reduce nuclear risks rather than heighten them.”

“The Cold War approach, with its bilateral treaties that covered limited types of nuclear weapons or only certain ranges of missiles, is no longer sufficient,” he said.

Talks with other nuclear-armed states aimed at reducing and eventually eliminating all types of nuclear weapons are necessary and overdue. But given the Trump administration’s lack of preparation and the complexity of such an endeavor, there is no possibility a new trilateral deal with Russia and China could be concluded before New START expires.

If Trump actually wants to avoid an arms race, the first step is to promptly agree with Russia to extend New START by five years.

U.S. allies strongly support a New START extension. There is bipartisan support in Congress and among the American public for the treaty’s extension. Extending the treaty would represent a significant policy win for Trump and would restore some of the United States’ lost standing in the world.

An extension of New START would provide a foundation for a more ambitious follow-on agreement with Russia limiting other types of nuclear weapons, including short- and intermediate-range nuclear weapons systems, as well as for talks with China to curb future nuclear and missile competition.

China, however, which has an estimated 300 nuclear weapons, has made it clear it is not going to join New START or reduce the size of its nuclear force unless Washington and Moscow pursue far deeper cuts of their nuclear arsenals, numbering some 6,500 weapons each.

A more realistic approach would be for the United States and Russia agree to negotiate a new nuclear arms reduction treaty with limits well below those of New START by one-third or more if China agrees not to increase the size of its stockpile and adopts some transparency measures.

For instance, all three countries might agree to jointly declare their total warhead numbers, including type of warheads and delivery systems. The three countries also could engage in regular talks on strategic stability, including the interrelationship between strategic ballistic missiles and missile defense, limits on hypersonic weapons, and a joint understanding that cyber capabilities should not be used interfere with nuclear command and control.

These types of multilateral efforts will be difficult and will take time. In the meantime, without New START, the risk of unconstrained nuclear arms competition and conflict with Russia would grow and the task of bringing other states in the nuclear disarmament enterprise would become even more challenging. Extending New START is Trump’s best chance for a deal to reduce the nuclear weapons danger.