Amid growing concern about the future of U.S.-Russian nuclear arms control efforts, the Trump administration is still evaluating a potential extension of the 2010 New Strategic Arms Reduction Treaty (New START) and appears to lack a clear plan to achieve a newly announced goal of negotiating more comprehensive agreements with Russia and China. 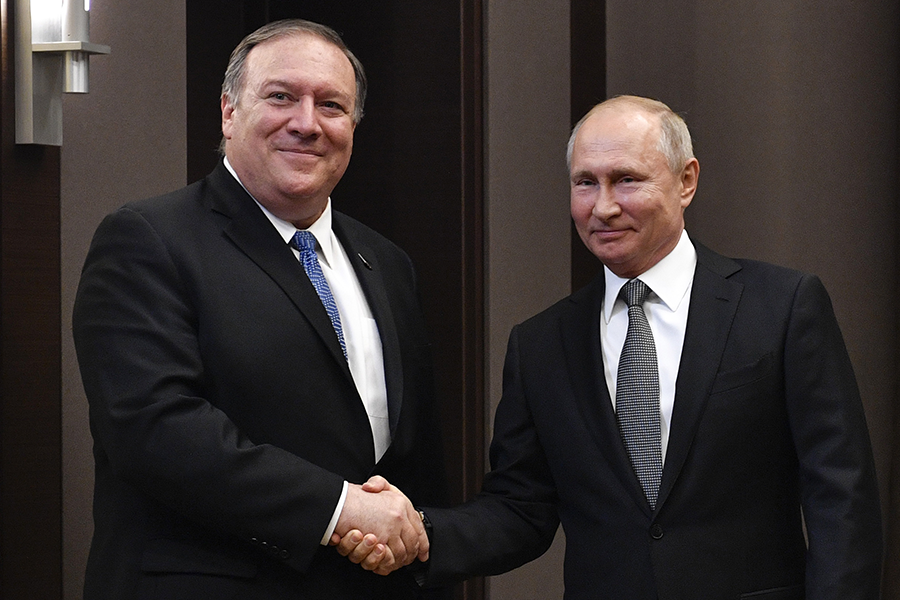 A decision on whether to extend New START is one that President Donald Trump “will make at some point next year,” said Tim Morrison, senior director for weapons of mass destruction and biodefense at the National Security Council, in May 29 remarks at the Hudson Institute in Washington.

Administration officials have repeatedly downplayed the risks of the treaty expiring in February 2021 with nothing to replace it. They also have provided few details on how they would persuade Russia to limit broader categories of weapons and China to participate in arms control talks for the first time.

U.S. Secretary of State Mike Pompeo told reporters following a May 14 meeting with Russian President Vladimir Putin and Foreign Minister Sergey Lavrov in Sochi, Russia, that the United States and Russia “agreed that…we will gather together teams that will begin to work not only on New START and its potential extension, but on a broader range of arms control issues that each of our two nations have.”

It remains unclear when such talks will begin, how frequently they will take place, who will lead the negotiating teams, what the Trump administration would be willing to offer for concessions from Russia and China, and whether New START would be extended in the absence of progress on a more comprehensive deal.

New START, which caps deployed U.S. and Russian strategic nuclear arsenals at 1,550 warheads and 700 missiles and bombers each, allows the two sides to extend the pact for up to five years until 2026 without requiring U.S. Senate approval.

“What we need to focus on is the comprehensive nuclear threat,” Morrison said. “The higher priority is the totality of the Russian and Chinese [nuclear] programs, because we have so much time left on the clock for New START.”

Several issues would affect the administration’s treaty extension decision, said Andrea Thompson, undersecretary of state for arms control and international security, before the Senate Foreign Relations Committee on May 15. They include Russia’s development of new types of strategic weapons systems and modernization of its large stockpile of nonstrategic nuclear weapons, its “record of being a serial violator and selective implementer of the arms control obligations and commitments that it undertakes,” and “China’s lack of transparency regarding the scope and scale of its nuclear modernization program” and unwillingness to discuss nuclear weapons issues with the United States.

Thompson and David Trachtenberg, deputy undersecretary of defense for policy, largely refused to provide the administration’s views on what the implications would be for U.S. security without New START. Trachtenberg testified alongside Thompson at the May 15 hearing.

Asked by Sen. Robert Menendez (D-N.J.), the senior Democrat on the committee, whether Russia could target the United States with “hundreds or perhaps thousands of additional nuclear warheads” in the absence of the treaty, Thompson replied, “That is a great question for Russia.”

The testimony from Thompson and Trachtenberg on New START disturbed the Democratic committee members.

“Extending New START would be, in my mind, an easy decision,” said Menendez. “It's very difficult to understand why the administration would discard the robust constraints, transparency, and verification measures of New START with nothing to replace them.”

Chairman James Risch (R-Idaho) strongly criticized any treaty extension. “Under present circumstances with [Russia’s] cheating and other things that they do, I'm opposed to extension,” he said.

Russia has repeatedly expressed interest in an extension, but it has raised concerns about U.S. procedures to remove submarine-launched ballistic missile launchers and some B-52 bombers from treaty accountability. (See ACT, March 2019.)

“The extension of the New START is not a simple technicality that could be resolved in a couple of weeks,” Anatoly Antonov, Russian ambassador to the United States, said on May 6 at the University of Pennsylvania. “Serious issues must first be settled.”

These concerns have not been well received by the White House. “We shouldn’t presuppose that the Russians are interested in extending the treaty,” Morrison said. “If they were, they wouldn’t be creating false narratives about U.S. compliance with the treaty.”

Russia has expressed a willingness to begin a dialogue with the United States on arms control and strategic stability, but it has its own list of concerns about U.S. policies and weapons systems, including missile defense systems, cyberweapons, weapons development in space, and advanced conventional arms.

The Trump administration has shown no indication that it would be willing to limit these weapons in an agreement with Russia or China. Even if it were willing to do so, it is highly unlikely an agreement could be reached before New START expires in less than two years.

Trump told reporters on May 3 that he had already spoken to China about a trilateral nuclear arms control deal and that “they very much would like to be a part of that deal.”

A Chinese Foreign Ministry spokesperson said on May 6, however, that China “will not take part in any trilateral negotiations on a nuclear disarmament agreement.”

China is estimated to possess about 300 nuclear warheads, according to the Federation of American Scientists. In contrast, the United States and Russia are believed to possess more than 6,000 warheads each. China has never been a party to any agreement that limits the number or types of its nuclear weaponry.

In a May 6 interview in Finland, Pompeo acknowledged that a trilateral deal involving China and that covers all types of U.S. and Russian nuclear weapons might be “too ambitious.” He noted that there are “just a couple years left before New START expires” and that it may be necessary to address the expiration of the treaty “on a bilateral basis.”

Asked at the May 15 hearing why he believed that China would want to engage in disarmament talks with the United States and Russia given Beijing’s much smaller nuclear arsenal, Trachtenberg replied that he could not “get into the mind of the Chinese leadership.” He said that “China should accept the responsibilities of a major power in the world today” by “engaging with respect to its nuclear arsenal.”

Menendez welcomed the administration’s interest in expanding the scope of arms control, but warned that “the limitations and verification measures of New START must remain in place while any such negotiation occurs.”

Democrats and one notable Republican have proposed several pieces of legislation in support of extending New START.

On May 9, Rep. Eliot Engel (D-N.Y.), the chairman of the House Foreign Affairs Committee, and Rep. Michael McCaul (R-Texas), the committee’s top Republican, introduced a bill titled “Richard G. Lugar and Ellen O. Tauscher Act to Maintain Limits on Russian Nuclear Forces.” The bill expresses the sense of Congress that New START should be extended by five years unless Russia is determined to be in material breach of the agreement or the treaty is replaced by a pact that contains equal or greater verifiable constraints on Russian nuclear forces.

The legislation also would require several briefings and reports, including an intelligence assessment of how the expiration of New START would affect the size and posture of Russian nuclear forces and the additional intelligence capabilities the United States would need to compensate for the loss of the treaty’s extensive transparency and on-site monitoring provisions.

In addition, Sen. Ed Markey (D-Mass.) introduced a bill on May 2 called “Save Arms Control and Verification Efforts (SAVE) Act” that calls for extending New START and would specifically prohibit any funding to increase the U.S. deployed strategic nuclear arsenal above the treaty limits through Feb. 5, 2026, if the president does not extend or attempts to withdraw from the treaty.

Opponents of New START have also introduced legislation on the treaty. Sens. Tom Cotton (R-Ark.) and John Cornyn (R-Texas) introduced a bill on May 13 that would prohibit the use of funding to implement an extension of New START or any successor agreement unless the agreement includes China and covers Russia's entire inventory of strategic and nonstrategic nuclear weapons. Rep. Liz Cheney (R-Wyo.) introduced companion legislation in the House.