Iran will no longer adhere to certain limits of the 2015 agreement that restricts its nuclear activities, the government announced on May 8, threatening to breach other restrictions if the states party to the agreement do not deliver the deal’s envisioned economic benefits. 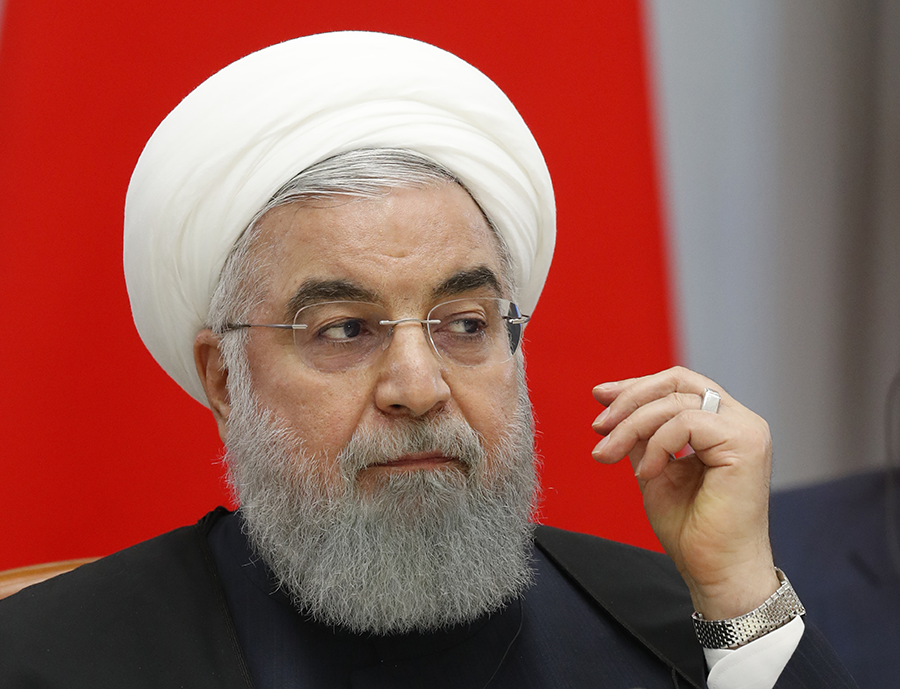 The announcement came exactly one year after the United States withdrew from the nuclear deal, known as the Joint Comprehensive Plan of Action (JCPOA), and began to reimpose sanctions that were lifted as part of the agreement. Over the past year, U.S. President Donald Trump and other administration officials have escalated their use of bellicose language as they implement their strategy of “maximum pressure” on Iran.

Iranian President Hassan Rouhani described Iran’s proposed steps as a reduction in compliance with the deal and emphasized that Tehran is not withdrawing from the JCPOA. He said Iran made this decision because it has received little economic benefit under the deal despite its continued compliance. Rouhani said Iran has no interest in waging war but “will not give in to bullying.”

U.S. Secretary of State Mike Pompeo described the announcement as ambiguous and said the United States will “have to wait to see what Iran’s actions actually are” before responding. A State Department press release on May 8 called the decision “a blatant attempt to hold the world hostage” and said Washington would build on its pressure campaign.

The remaining five parties to the deal (China, France, Germany, Russia, and the United Kingdom) urged Iran to continue complying with the agreement, while Russian Foreign Minister Sergey Lavrov blamed the “irresponsible behavior” of the United States for creating an “unacceptable situation.”

EU foreign policy chief Federica Mogherini and the foreign ministers of the three European countries party to the deal rejected “any ultimatums” from Iran and said they would continue to assess Iran’s compliance with the JCPOA based on whether the country is meeting its nuclear commitments. The statement did not indicate what actions the European Union and the three European states might take if Iran does breach the deal.

Any breach of the JCPOA limits would violate the deal, but the initial steps Iran announced do not pose an immediate proliferation risk. Heavy water is used to moderate certain types of reactors that can produce plutonium for nuclear weapons, and Iran is far from completing such a reactor.

If Iran exceeds the stockpile limit on LEU, it would reduce the time needed for Tehran to produce enough fissile material for one nuclear weapon, known as the breakout time, but the 3.67-percent enrichment level is significantly below the 90-percent level considered to be weapons grade. Iran’s current breakout time is estimated at about 12 months. Prior to the JCPOA, it was two to three months.

Iran’s May 8 statement noted that “once our demands are met, we will resume implementation” of the JCPOA.

Tehran attributed its decision to the systematic campaign by the United States to deny Iran sanctions relief provided by the deal. Most recently, the Trump administration announced on April 22 that it would no longer grant waivers permitting states to buy limited amounts of oil from Iran, cutting off Iran’s largest export commodity and a key source of currency.

Following that decision, on May 3, the United States announced it would end several waivers for nuclear cooperation activities, including provisions that allowed Iran to store excess heavy water overseas and ship out enriched uranium. Waivers for several other nuclear cooperation projects were granted and will proceed for now.

Rouhani implied that the U.S. decision to target the sale or storage of enriched uranium and heavy water was forcing Iran into breaching the limits. Although the JCPOA allows for Iran to sell excess heavy water and enriched uranium, the country has other options for staying below the caps set by the JCPOA.

The additional steps that Iran threatened, which would begin 60 days after the May 8 announcement if the remaining JCPOA parties are not able to facilitate further oil sales or establish banking relations, pose a more significant proliferation risk. Those steps include restarting work on Iran’s heavy-water reactor and enriching uranium to 20-percent uranium-235.

Uranium enriched to 20 percent is still far below what is considered to be weapons grade, but significantly less work would be required to enrich that material to the 90-percent level than is needed to enrich uranium from 3.67 percent to 20 percent, further shortening Iran’s breakout time.

Restarting construction on the unfinished heavy-water reactor at Arak would not pose a short-term risk, as the reactor is years away from operating, but would still create concerns because the facility’s original design was capable of producing enough plutonium for approximately two nuclear weapons every year.

The nuclear deal required Iran to modify the reactor to produce much less plutonium annually, to refrain from separating any plutonium from the reactor’s spent fuel, and to ship out all spent fuel for 15 years. If Iran begins construction based on the modified design, it poses far less of a proliferation risk.

The remaining JCPOA parties have tried to preserve the economic benefits envisioned by the agreement, but efforts have been slow. Despite EU efforts to block the implementation of U.S. sanctions on European companies, the threat of U.S. sanctions and the risk of penalties has pushed most entities out of Iran. It is unclear if the EU, China, and Russia will be able to meet Iran’s demands.

The EU and Iran have set up a dedicated financial channel to facilitate transactions that are not subject to U.S. sanctions. When Mogherini first announced that such a mechanism would be created, she said it may be used to facilitate oil sales, but now European officials have stated that it will be limited to humanitarian trade. Although the mechanism has been set up, it is not yet functioning and is unlikely to be expanded to include oil trade within Iran’s 60-day timeline.

China appears to be the only state willing to risk U.S. sanctions by continuing to purchase oil from Iran. Beijing has been Iran’s largest oil customer, and China received a waiver from the United States in November to continue purchases for 180 days. The waiver ended May 2 and was not renewed, but an oil tanker owned by a Chinese bank left an Iranian port with 2 million barrels of oil on May 17. It is unlikely that this single shipment will be enough for Iran to refrain from following through on its threat to breach certain JCPOA limits, but it may indicate a willingness by some states to continue purchasing oil from Tehran.

If Iran does follow through on its threat to violate the deal, it will likely further escalate tensions between the United States and Iran.

National Security Advisor John Bolton announced in a May 5 statement that the USS Abraham Lincoln aircraft carrier strike group and a bomber task force were being deployed to the U.S. Central Command region in response to a number of “troubling and escalatory indications and warnings.” Bolton said the move will “send a clear and unmistakable message to the Iranian regime that any attack on United States interests or on those of our allies will be met with unrelenting force.”

U.S. officials said Iranian-backed forces were behind May 12 attacks on oil tankers docked off the coast of the United Arab Emirates, but offered little public evidence to support that assessment.

U.S. allies and members of Congress briefed on the intelligence have disagreed with Bolton’s characterization of it. British Army Maj. Gen. Christopher Ghika, who serves as deputy commander of coalition forces fighting the Islamic State, said on May 15 there is no increase in the threat from Iran.

Sen. Chris Murphy (D-Conn.) said on May 21 that intelligence presented does not indicate that Iran is “taking unprovoked and offensive measures” against the United States and its allies.

Trump has repeatedly said that he does not want war with Iran, but tweeted on May 19 that “if Iran wants to fight, that will be the official end of Iran.”

Rouhani responded to Trump’s May 20 rhetoric, saying that the “situation is not suitable for talks and our choice is resistance only,” and Iranian Foreign Minister Javad Zarif said that “economic terrorism and genocidal taunts won’t ‘end Iran.’”