In the early days of August, the United States and North Korea seemed to be slipping toward the unthinkable, a war on the Korean peninsula that could kill hundreds of thousands of people or more within the initial hours.

President Donald Trump declared in unscripted remarks on Aug. 8 that North Korea will be met with “fire and fury” and “power the likes of which this world has never seen before” if Pyongyang makes further threats against the United States. His vague and escalatory comments quickly drew a response from Pyongyang that its military leaders would draw up plans giving leader Kim Jong Un a confrontational option of launching four ballistic missiles that would overfly Japan and splashdown in international waters near the U.S. territory of Guam in the western Pacific Ocean. 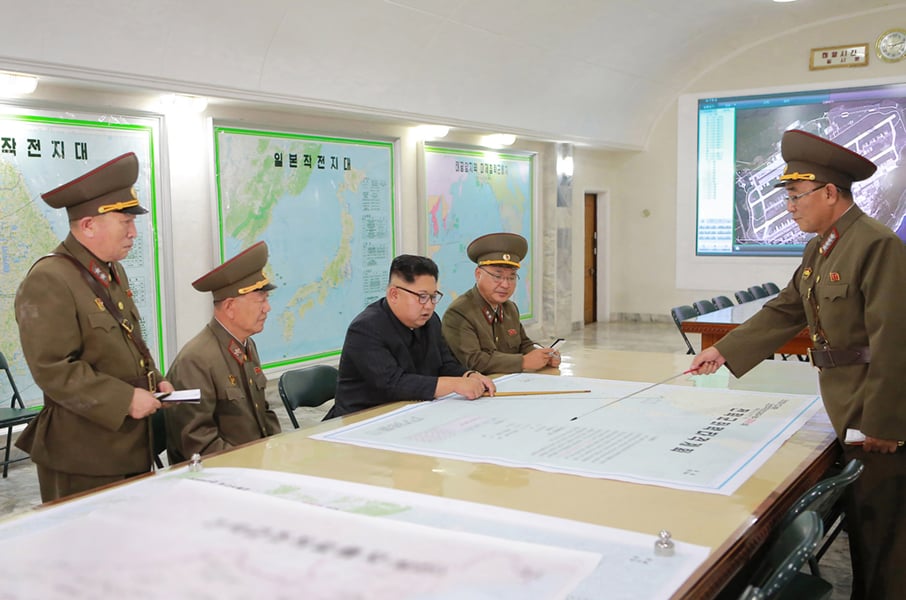 Yet, there were signs that a better course could be found. Despite provocative missile tests by North Korea in July and threatening rhetoric from Trump, Pyongyang seemed to signal that it is willing to engage in talks with the United States, and that has not gone unnoticed in Washington. U.S. Secretary of State Rex Tillerson said at an Aug. 22 news conference that diplomacy may be possible in the “near future,” noting that North Korea had demonstrated “some level of restraint that we have not seen in the past.” Trump pulled back a bit later the same day. “Maybe, probably not, but maybe, something positive can come about,” Trump said in impromptu remarks during a free-wheeling, campaign-style speech Aug. 22 in Phoenix.

Those comments offered some basis for hope that the two sides can find a diplomatic off-ramp before a conflict is triggered intentionally or by accident. Just how tentative that prospect remains, however, was demonstrated Aug. 29 (Korean time) as tensions flared anew following a North Korean missile test that overflew Japan.

North Korea has issued statements reiterating that it will not negotiate as long as the United States maintains a “hostile policy and nuclear threat.” Yet, it appeared to keep the door open for diplomacy even as tensions escalated after The Washington Post reported on Aug. 8 on a U.S. Defense Intelligence Agency assessment that North Korea has miniaturized nuclear warheads for use atop its ballistic missiles, including missiles capable of reaching much of the U.S. mainland. The assessment followed North Korea’s first two launches of intercontinental ballistic missiles (ICBMs) in July, both of which were successful. (See ACT, July/August 2017.)

North Korea has threatened Guam in the past because U.S. military bases there are used by B-1B strategic bombers that conduct flyovers of the Korean peninsula, but until this year, Pyongyang had not successfully tested a ballistic missile capable of reaching the island. Although the bombers are not nuclear capable, North Korea views the flyovers as aggressive.

North Korea’s statement was widely perceived as a threat and an escalation
of rhetoric, but some North Korea experts such as Robert Carlin, a former CIA and State Department analyst who took part in past negotiations, read Pyongyang’s statement about developing a “plan” to fire missiles toward Guam as a signal
that North Korea was moving to
de-escalate tensions.

Carlin, a visiting scholar at the Center for International Security and Cooperation at Stanford, said that Pyongyang’s subsequent decision to wait and gauge Washington’s response before launching missiles toward Guam was a positive sign. In an Aug. 15 piece for the blog 38 North, Carlin wrote that this is “exactly how the North moves back from the edge of a cliff.”

Having broken the tension, it would “not be unusual for North Korea to pivot to diplomacy,” he wrote.

Tillerson also noted in his Aug. 22 news conference that Pyongyang had not conducted a missile launch or provocative act since the UN Security Council adopted a resolution imposing addition sanctions on the country—an observation that was overtaken by events a week later. The resolution, adopted unanimously Aug. 5, was a response to North Korea’s ICBM tests. The resolution contained new restrictions, such as an export ban for North Korean coal, iron, seafood and lead, particularly affecting vital trade with China and Russia.

Ahead of Tillerson’s Aug. 22 news conference, the U.S. Treasury Department imposed sanctions on Russian and Chinese entities for supporting North Korea’s nuclear and ballistic missile programs. Treasury Secretary Steven Mnuchin said it is “unacceptable for individuals and companies in China, Russia, and elsewhere” to enable North Korea to generate income for its nuclear and missile programs. Additional designations targeted foreign entities that use North Korean workers, which is a source of income for Pyongyang.

Tillerson’s approach of pairing sanctions pressure with diplomatic overtures seems to have support from key cabinet officials, such as U.S. Defense Secretary Jim Mattis, and South Korean President Moon Jae-in. In a joint op-ed in The Wall Street Journal on Aug. 13, Tillerson and Mattis wrote that “diplomacy is our preferred means of changing North Korea’s course of action” but those efforts are backed by military options.

The military option, particularly the viability of preventive strikes targeting North Korea’s nuclear and missile activities, is increasingly dismissed as ineffective and likely to lead to a larger conflict with catastrophic consequences. Retired Gen. Wesley Clark, former supreme allied commander of NATO, wrote in a commentary for CBNC on Aug. 10 that to eliminate North Korea’s nuclear and missile program, there is “no military option short of general warfare in Korea,” which would likely result in millions of casualties.

That is known within the White House, as Trump’s former chief strategist Steve Bannon said in an indiscreet Aug. 16 interview with the editor of The American Prospect magazine. “There’s no military solution [to North Korea’s nuclear threats], forget it,” he was quoted as saying. “Until somebody solves the part of the equation that shows me that 10 million people in Seoul don’t die in the first 30 minutes from conventional weapons, I don’t know what you’re talking about, there’s no military solution here, they got us.”

The U.S.-South Korean joint military exercises underway tested North Korea’s nascent restraint and may have contributed to North Korea’s decision to conduct the Aug. 29 launch. On Aug. 17, North Korea had called on Washington to refrain from “extremely dangerous actions around the Korean peninsula” and deploying “huge nuclear strategic equipment.”

The United States and South Korea began joint military exercises Aug. 22. The United States does not have nuclear weapons stationed on South Korean soil, but nuclear-capable bombers have participated in past exercises. Pyongyang views so-called decapitation drills, which are military training for targeting North Korea’s leadership, as particularly confrontational.

North Korea has said it would agree to a moratorium on nuclear and missile testing if the United States suspends joint military exercises with South Korea.

The United States may not be able to front-load the agenda with discussions of denuclearization, which North Korea publicly rejects because it views nuclear weapons as ensuring the survival of its regime. Still, halting additional progress on missiles and nuclear warheads through a test moratorium would be a positive step to prevent qualitative improvements derived through testing.

Putting a suspension or roll-back of joint U.S.-South Korean military exercises on the table in exchange does not undermine U.S. commitments to its allies and can be quickly ramped back up if North Korea abandons the moratorium. There also is precedent for this type of deal. Washington scaled back exercises in the 1990s and successfully negotiated a deal with North Korea that halted the country’s production of plutonium for nuclear weapons for nearly a decade.

If both sides are able to stick to a “freeze for freeze” deal, that could open up space to talk about a more comprehensive agreement that includes additional limits and a roll-back of North Korea’s nuclear program.