U.S. President Donald Trump has set the stage for actions, starting as early as next month, that could unravel the Iran nuclear deal, a development that would jolt U.S. relations not only with Tehran but also with Russia, China, and major allies in Europe who helped negotiate the deal. 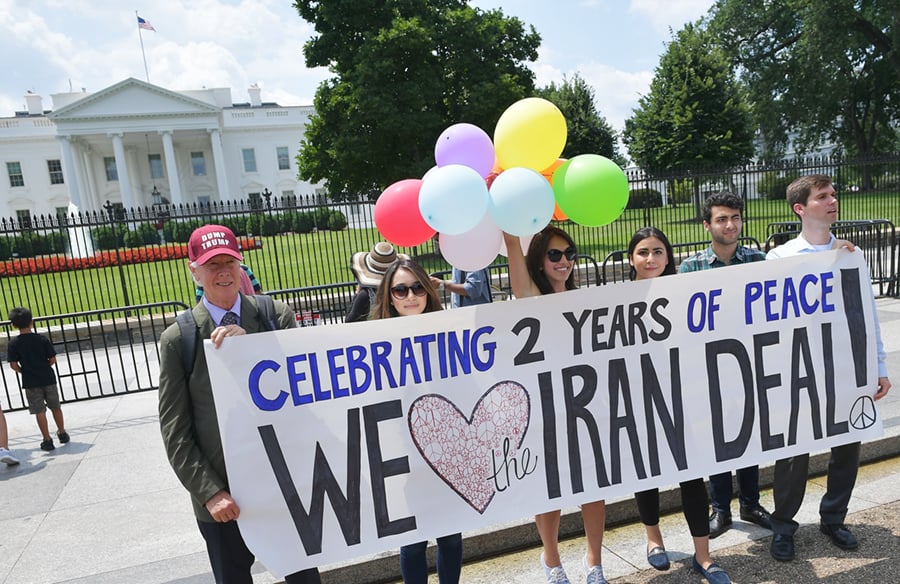 Trump signaled that he might not issue a certification to Congress tied to the nuclear deal at the next 90-day deadline, irrespective of Tehran’s compliance with the accord. In a July 25 interview with The Wall Street Journal, Trump said he would be “surprised” if he could issue the certification to Congress at that deadline in mid-October. “If it was up to me, I should have had [Iran] noncompliant 180 days ago,” he said.

Failure to issue the certification triggers a process that allows Congress to reimpose on an expedited schedule sanctions waived under the nuclear accord. Such moves, absent strong evidence of Iran’s failure to comply, would violate U.S. commitments and could enable Iran to cite the U.S. breach as justification for restarting currently prohibited nuclear activities. Further, European allies are unlikely to support U.S. sanctions if Trump is seen as acting in bad faith, reducing the economic impact on Iran while adding a new source of transatlantic tensions.

The 90-day certification requirement, as well as the expedited process for reimposing sanctions, are laid out in the 2015 Iran Nuclear Agreement Review Act, which allowed Congress the option to vote to approve or disapprove the nuclear deal after it was finalized in 2015. (See ACT, November 2015.) It is not a requirement of the multilateral nuclear deal, known as the Joint Comprehensive Plan of Action (JCPOA), negotiated between Iran and P5+1 countries (China, France, Germany, Russia, the United Kingdom, and the United States).

The certification, however, is broader in scope than the nuclear deal. In addition to determinations that Iran is complying with the nuclear deal and has not taken steps to advance a nuclear weapons program, it includes more subjective assessments, such as certifying that continued implementation of the agreement is in the U.S. national security interest and that the sanctions relief Iran is receiving is proportional to the limits on the country’s nuclear activities.

As a result, Trump could withhold the certification even if Iran is meeting all of its commitments under the JCPOA.

At the last certification deadline, on July 17, Trump was reportedly persuaded to issue the certification by members of his cabinet, including Defense Secretary Jim Mattis, Secretary of State Rex Tillerson, and national security adviser H.R. McMaster. The State Department’s statement on July 18 on the certification said that Iran’s “continued malign activities outside of the nuclear issue undermine the positive contributions to regional and international peace and security that the deal was supposed to provide.”

It is unclear from Trump’s remarks in his interview with The Wall Street Journal whether his threat to withhold certification at the next deadline would be based on an allegation that Iran is not complying with its commitments or a determination that the nuclear deal is no longer in U.S. national security interest.

Unless circumstances around Iran’s implementation change prior to Oct. 15, it would be difficult for the Trump administration to make a compelling case that Iran is failing to meet its nuclear deal commitments. In July, the U.S. intelligence community and Washington’s P5+1 partners assessed that Iran was meeting its commitments.

U.S. Air Force Gen. Paul Selva, vice chairman of the Joint Chiefs of Staff, told the Senate Armed Services Committee on July 18 that “based on the evidence that’s been presented to the intelligence community, it appears that Iran is in compliance with the rules that were laid out in the JCPOA.” Federica Mogherini, EU foreign policy chief and lead negotiator for the P5+1, said on July 14 that six reports from the International Atomic Energy Agency (IAEA) confirm that Iran is meeting its commitments.

Regardless of whether Trump chooses to withhold certification over allegations of Iranian noncompliance or on U.S. national security grounds, a 60-day window would begin for Congress to introduce legislation reimposing sanctions on Iran that were waived under the nuclear deal.

Separately, Congress in July passed new sanctions that include measures targeting Iran for its ballistic missile program, support for terrorism, and human rights violations. The sanctions legislation, which Trump signed into law Aug. 2, does not violate the nuclear deal, although Iran characterized the measures as a violation of the “spirit” of the agreement.

Yet, if Congress were to reimpose nuclear-related sanctions waived as part of the nuclear deal, Iran is likely to accuse the United States of violating the agreement and could take its own steps to modify or abandon the constraints on its nuclear program. The text of the deal states that Iran will treat such a reintroduction or reimposition of the sanctions waived as “grounds to cease preforming its commitments” in whole or in part.

Iranian officials have stated that Tehran will continue implementing the agreement regardless of U.S. actions. But Iranian President Hassan Rouhani said that if U.S. officials want to “return” to the negotiating table for a new deal, as Trump has advocated, within “hours and days,” Iran will “return to a much more advanced situation” than at the time negotiations on the nuclear deal began.

Iran passed legislation in 2015 that could require Tehran to resume enrichment of uranium up to 20 percent uranium-235, which is closer to weapons grade than the 3.67 percent limit under the nuclear deal, if another party violates the agreement. Iran produced uranium enriched to 20 percent prior to the conclusion of the nuclear deal. The interim agreement reached in November 2014 halted enrichment to that level of any additional amounts and neutralized Iran’s existing stock of 20 percent enriched uranium.

Ali Akhbar Salehi, head of the Atomic Energy Organization of Iran, reiterated on Aug. 22 that Iran has options to resume nuclear activities if the United States leaves the deal. He said Iran could start enrichment to 20 percent uranium-235 in four to five days.

Given the benefits of the deal and the speed at which Iran could resume some of its nuclear activities, an official from one of the European countries that participated in the negotiations said in an Aug. 21 interview with Arms Control Today that it would be “foolhardy” for the United States to withhold certification for any reason other than in the case of a significant act of nonperformance by Iran. Even then, the nuclear deal has a mechanism for resolving disputes and implementation issues, the Joint Commission, which has “demonstrated its ability to address concerns,” he said.

The Joint Commission is comprised of the P5+1 countries that negotiated the nuclear deal, the EU, and Iran. Any of the parties can raise a compliance concern and use the dispute resolution mechanism to seek to resolve the issue. If the Trump administration has compliance concerns, the Joint Commission should try and resolve the issue “before a rush by Congress to reimpose sanctions,” the European official said.

The official also said that Washington should not assume that the European Union will “go along with putting the sanctions back” and may even take steps to protect European businesses from any reimposed measures that would threaten contracts and future business opportunities with Iran.