The United States and Russia are preparing to resume talks on strategic stability amid deep divisions on a host of bilateral issues, including arms control, and in the wake of new congressionally imposed sanctions on Moscow that U.S. President Donald Trump grudgingly signed into law last month. 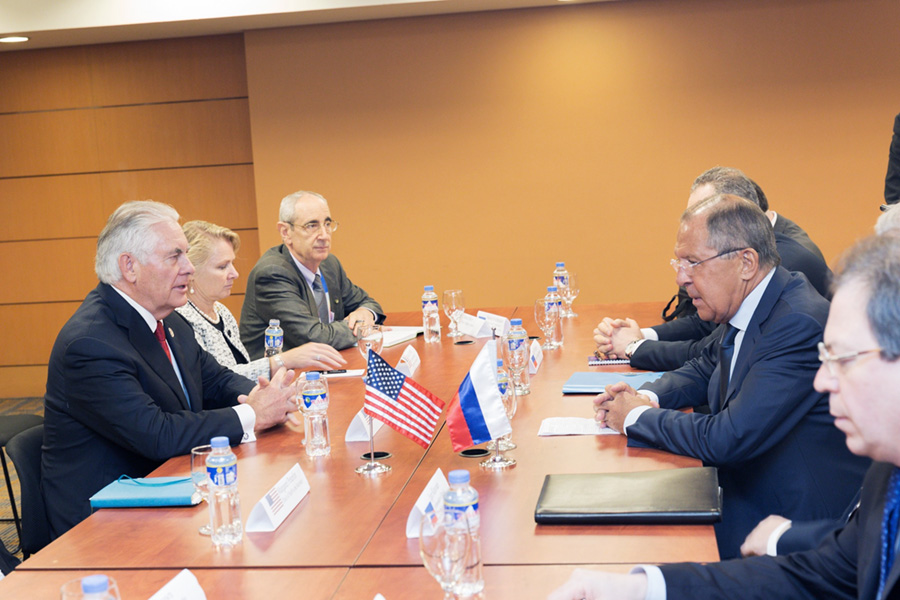 U.S. Secretary of State Rex Tillerson and Russian Foreign Minister Sergey Lavrov reached an agreement in principle at their May meeting in Washington to resume dialogue on nuclear and related issues. Such talks would provide an important venue for discussions between Washington and Moscow at a difficult time in the relationship on steps to reduce the risks of nuclear weapons use and to reinforce and build on existing arms control mechanisms.

But the two sides have yet to agree on when the talks will begin and who will attend. There is no indication that Trump and Russian President Vladimir Putin discussed nuclear weapons issues during their July 7 bilateral meeting on the sidelines of the Group of 20 summit meeting in Hamburg, Germany.

“We have agreed in principle to hold a bilateral, interagency exchange on a number of issues related to maintaining strategic stability between Russia and the United States,” a State Department official wrote in an Aug. 23 email to Arms Control Today. “We do not have any scheduled meetings to announce at this time.”

Russia wants talks on arms control, nonproliferation issues, “and, accordingly, strategic stability,” Russian Deputy Foreign Minister Sergey Ryabkov said in an interview with Kommersant published Aug. 8. “Unfortunately, so far under the new administration, a dialogue on this topic is extremely slow,” he said. “But we expect that in the near future the relevant contacts will resume.”

The Obama administration had sought to begin talks with Russia on strategic stability last year, but Russia demurred, preferring to await the new U.S. administration.

Before and after taking office, Trump stated repeatedly that he would like to improve relations with Moscow. Reflecting that sentiment, Tillerson said on May 14 on “Meet the Press” that the United States needs to “improve the relationship between the two greatest nuclear powers in the world.”

“I think it’s largely viewed that it is not healthy for the world, it’s certainly not healthy for us. . . for this relationship to remain at this low level,” Tillerson added.

Still, tensions between the two countries remain due to disagreements over a growing list of issues that, from the U.S. viewpoint, include Russia’s alleged interference in the U.S. presidential election, continuing involvement in the war in Ukraine, alleged violation of the Intermediate-Range Nuclear Forces (INF) Treaty, and support for Syria’s Assad regime. Russia has complaints of its own, including U.S. sanctions, construction of missile defense systems in Europe, and NATO defensive activities described by Moscow as threatening.

As long as the cloud of the continued congressional and FBI investigations into the Trump campaign’s conduct prior to and after the 2016 election hangs over the administration, there will be significant domestic political constraints on its ability to seek a grand bargain with Moscow, including on significant nuclear arms control measures.

For example, the House and Senate voted overwhelmingly in July to increase sanctions on Russia over its actions in Ukraine and Syria, as well as allegations that it interfered in the 2016 U.S. elections. Notably, the bill gives Congress the power to block the president from making any changes to sanctions policy on Russia.

Trump signed the bill Aug. 2, but in a statement said the law was “significantly flawed” and “included a number of clearly unconstitutional provisions.” The next day, Trump tweeted that Congress, not Russia, is to blame for the bilateral relationship being “at an all-time & very dangerous low.”

Key pillars of the U.S.-Russian arms control architecture, like the bilateral relationship more broadly, are under siege.

Although some meaningful arms control cooperation continues, such as adherence to the 2010 New Strategic Arms Reduction Treaty (New START) and implementation of the 2015 Iran nuclear deal, there is no ongoing dialogue on further nuclear risk reduction steps. 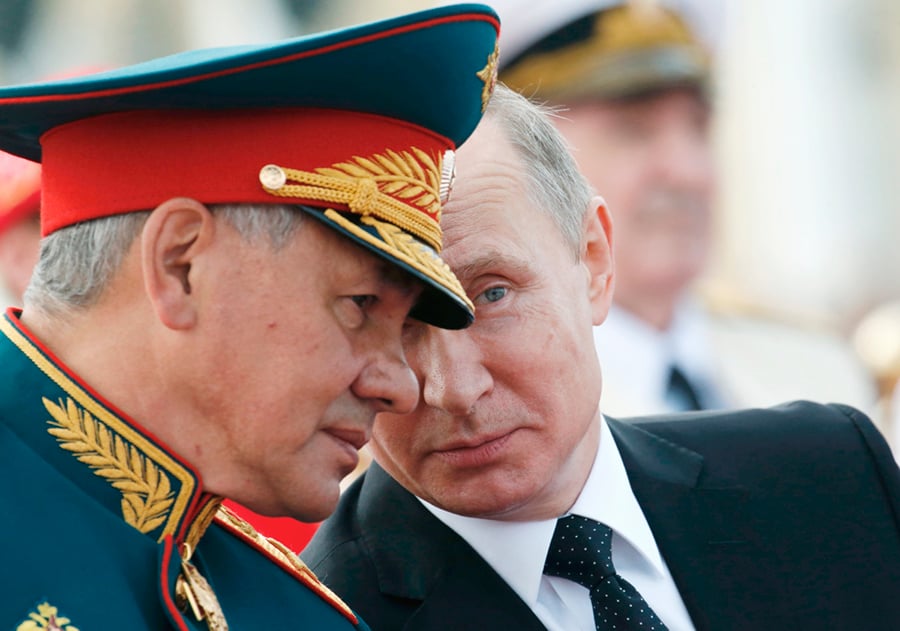 Putin rebuffed President Barack Obama’s June 2013 proposal to reduce U.S. and Russian strategic nuclear stockpiles by one-third below the ceilings set by New START, which caps the deployed strategic nuclear arsenal of each country at 1,550 accountable warheads and 700 deployed delivery vehicles. Progress was stymied due in part to disagreement between the two sides about non-nuclear issues that could impact the strategic balance, such as missile defense and advanced conventional weapons.

To make matters worse, the United States has accused Russia of testing and deploying ground-launched cruise missiles (GLCMs) in violation of the 1987 INF Treaty. Moscow denies it is violating the agreement and instead has accused Washington of breaching the accord. Ryabkov said that the INF Treaty is a “very important and stabilizing factor” and that Russia remains committed to the accord.

Meanwhile, some Republican members of Congress are seeking to escalate the dispute by requiring the Pentagon to begin research and development on a U.S. GLCM to counter Russia’s violation. Furthermore, U.S. and NATO officials have expressed concern that Russia is developing new nuclear weapons and lowering the threshold for when it might consider using them.

It remains to be seen how the Trump administration will approach the arms control relationship with Russia. The administration is conducting a Nuclear Posture Review that is examining U.S. nuclear policy and strategy. (See ACT, March 2017.) The review is scheduled to be completed by the end of the year.

The president has said that global nuclear weapons inventories should be significantly reduced, but he also has pledged to strengthen and expand U.S. nuclear capabilities, denounced New START, and reportedly responded negatively to Putin’s suggestion in a January phone call to extend the treaty.

An Agenda for Talks

Christopher Ford, special assistant to the president and senior director for weapons of mass destruction and counterproliferation, told the Arms Control Association annual meeting on June 2 that the Trump administration is “working very hard to try to re-engage” with Russia “on matters that relate to strategic stability.”

Ford said this engagement includes “broader questions. . . of how various pieces of our security postures fit together and either are conducive to or detrimental to broader questions of global peace and security.”

This would suggest a wide-ranging agenda for talks, including the growing number of factors that influence U.S. and Russian thinking about nuclear force policy, including missile defense, third-country nuclear forces, advanced conventional weapons, the cyber domain, and more.

An early focus of discussion could be forging a better common understanding of strategic stability and how it can be bolstered by arms control and more frequent dialogue.

Another early deliverable from the talks could be agreement on an extension of New START and its verifications provisions by five years until 2026, as allowed by the treaty.

In a July 18 interview with Kommersant, Ryabkov reiterated Russia’s offer to begin talks with the United States on extending the treaty. He said the United States has been “too slow,” particularly in hiring senior personnel empowered to discuss New START implementation and a possible extension.

If the treaty is allowed to lapse with nothing to replace it, there would be no limits on Russia’s strategic nuclear forces.

Strategic stability discussions also would provide a high-level forum to discuss preservation of the INF Treaty and ways to resolve the compliance dispute. A prerequisite for progress would likely require that each side acknowledge the other’s concerns.

The collapse of the treaty could unleash a costly new arms race in intermediate-range missiles, which would undermine security in Europe and Asia, and make continued strategic arms control measures practically impossible.