“[My time at ACA] prepared me very well for the position that I took following that with the State Department, where I then implemented and helped to implement many of the policies that we tried to promote.”
– Peter Crail
Business Executive for National Security
June 2, 2022
IAEA Hosts Nuclear Security Meeting

The International Atomic Energy Agency (IAEA) hosted its second triennial meeting on nuclear security in December. Several participants said that the meeting made some progress but was less successful than President Barack Obama’s series of nuclear security summits.

Representatives from 139 states attended the ministerial-level conference Dec. 5-9 in Vienna, the first high-level gathering on the topic since the end of the separate nuclear security summit process in April 2016. (See ACT, May 2016.) 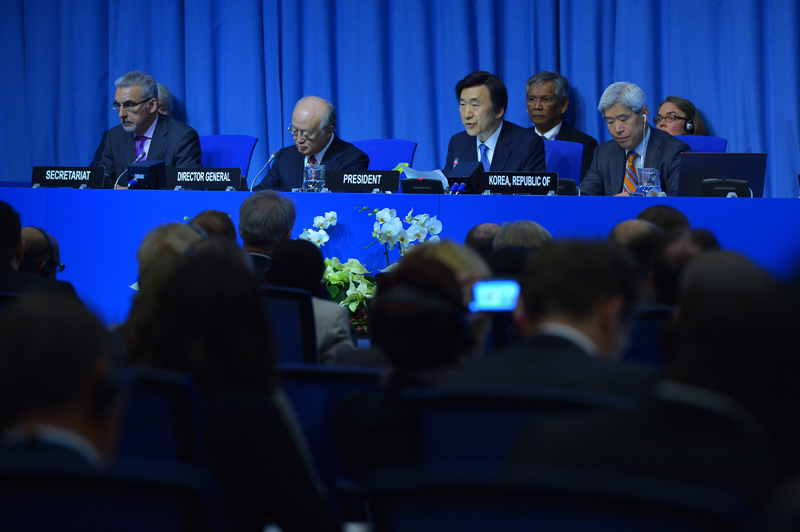 Obama convened the biennial nuclear security summits beginning in 2010 to draw attention to the risks posed by nuclear terrorism and the need to strengthen the security of civilian nuclear materials. More than 50 world leaders attended each of the four summits and,at the final one, agreed that the IAEA and several other organizations should continue the summits’ work.

An official who attended the IAEA meeting told Arms Control Today on Dec. 19 that the conference had the “benefit of inclusivity,” which is necessary to encourage broad compliance with good nuclear security practice. But he said that the smaller, more flexible nature of the summits made them more effective at making progress and spurring states to take action at the national level.

The meeting produced a statement highlighting “the importance of keeping pace with evolving challenges and threats” and the IAEA’s “central role” in facilitating international cooperation. Yet, that role is complicated by the IAEA’s reliance in this area on voluntary contributions. Several states pledged contributions to the IAEA nuclear security fund during the conference.

Miles Pomper, a senior fellow at the James Martin Center for Nonproliferation Studies who attended the conference, said in a Dec. 21 email that one of the shortcomings was “any commitment to including more funding for nuclear security in the regular IAEA budget as opposed to voluntary contributions.”

The ministerial statement echoed the summits in calling on states to take actions on matters such as ratifying key nuclear security treaties and further minimizing highly enriched uranium (HEU) in civilian stocks and using low-enriched uranium “where technically and economically feasible.” The reference to minimizing HEU use is “worth noting” given that Russia has made statements recently about continuing to use HEU to produce isotopes for medical purposes, Pomper said.

On other topics, Pomper said that Russia’s positions and its tensions with the United States were “a key obstacle to progress.” Russia made clear its “lack of interest in advancing efforts to improve international rules in many areas” and pushed instead for national-level responsibilities, he said. One of the areas where Russia acted as a spoiler was an effort to approve guidance for the disposal of disused radiological sources, which would supplement the existing code of conduct on the safety and security of radioactive sources, Pomper said.

Pomper also identified the U.S. presidential transition as “subtly” undermining prospects for progress because it is not clear “where the Trump administration will come out on nuclear security issues.”

Several countries, including the United States, took the opportunity to announce country-level actions or to make recommendations for additional IAEA work on nuclear security.

U.S. Energy Secretary Ernest Moniz said that the United States is “embarking on an effort to dilute and dispose of approximately six metric tons of excess plutonium” and is consulting with the IAEA on agency monitoring and verification of the process. The plutonium is surplus material stored at the Savannah River Site in South Carolina and brings the total amount of surplus plutonium that Washington has designated for elimination to 40 metric tons.

The United States will use the dilute-and-dispose approach that entails mixing the plutonium with an adulterant and packaging it into canisters for storage in a geological repository, according to a Dec. 5 press release from the Energy Department.

Shi Zhongjun, China’s representative to the IAEA, said in a Dec. 6 statement that the agency should work on “strengthening networks for nuclear security education and training.” China offered resources from its Center of Excellence on Nuclear Security.

The ministerial statement also drew attention to the potential for cyberattacks against nuclear facilities, affirming support for IAEA efforts to assist member states “to strengthen computer security.” The United Kingdom announced that it had held two workshops on improving cybersecurity for industrial control systems and held a joint workshop with the United States aimed at improving a response to a major cyberattack on a civil nuclear facility.

The ministers showed an interest in expanding the IAEA’s work to address cyberthreats, but they did not decide how the agency should proceed in that area. The UK also called for more work on security for transportation of nuclear materials.

The IAEA intends to hold another nuclear security conference in three years.