On December 16, I attended a ribbon-cutting ceremony in Lanzhou, China, to mark the first certification of an International Monitoring System (IMS) station in China’s national network of 11 facilities being established to monitor global compliance with the Comprehensive Test Ban Treaty (CTBT). This represents a milestone for the treaty and illustrates the real progress that has been achieved in cooperating with China on nuclear test monitoring and verification challenges.

Strengthening the relationship with China has been one of my top priorities. My first official travel after taking office as executive secretary of the Preparatory Commission for the Comprehensive Nuclear-Test-Ban-Treaty Organization (CTBTO) was to China in August 2013. Shortly thereafter, we secured the provision of monitoring data from Chinese IMS stations to the International Data Centre in Vienna. This flow of data helps to ensure that the verification requirements of the CTBT are being met, providing our member states with a high degree of trust and confidence in our ability to monitor the globe for any signs of nuclear explosions. 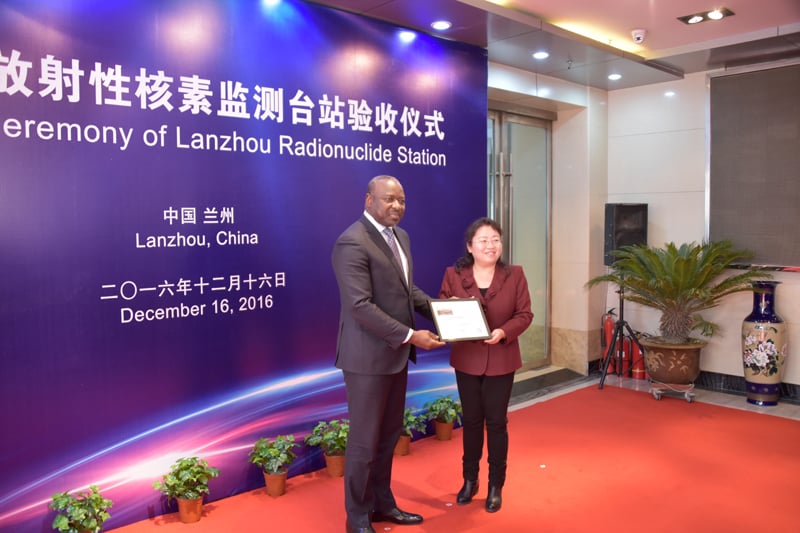 We also have achieved significant progress in expanding our monitoring capabilities through enhanced engagement and cooperation with several other member states, in particular the Russian Federation, Ecuador, Argentina, and many African countries. This is helping to create a tailwind effect toward the completion and full operation of the IMS.

There is a general feeling that the nuclear nonproliferation regime faces significant challenges. It might therefore come as a surprise that I see the CTBT as a “good news” story, continuing along the road to success, even if some of the steps forward take longer than others.

It is worth recalling that the treaty required three years of intense and often contentious negotiations in Geneva in the mid-1990s, not to mention decades of collaborative scientific research and debate on nuclear test ban verification issues before that. Yet, these heady discussions on science and policy eventually culminated in the adoption of the CTBT by the UN General Assembly in September 1996.

Immediately afterward, a preparatory commission was created to orchestrate the buildup of the most extensive and ambitious multilateral verification regime ever envisaged. The commission is still with us today even if it might be more accurately termed at this stage an “interim organization.” More than 90 percent of the planned global nuclear test monitoring assets are in place, and the detection threshold is far better than the treaty’s negotiators thought feasible. This has been borne out by the CTBT monitoring system’s accurate and timely detection of all five nuclear tests conducted by the Democratic People’s Republic of Korea, including two in 2016.

We commemorated the 20th anniversary of the opening for signature of the CTBT last September. Many high-level events were held last year in recognition of the treaty’s role in solidifying a de facto norm against nuclear testing and contributing to remarkable advancements in nuclear test monitoring science and technology.

An unprecedented, CTBT-specific UN Security Council resolution, Resolution 2310, was adopted that same month, accompanied by a related statement in which the five permanent members underlined their commitment to the treaty. Strong support for the treaty and its verification regime also came from resolutions and statements of the Group of Seven, NATO, the European Parliament, and the International Organisation of La Francophonie.

We now witness almost universal political support in the international community for the objectives of the CTBT, namely an effectively verifiable, credibly enforceable, legal prohibition on nuclear test explosions. With 183 states-signatories and 166 ratifying states, the treaty is one of the legal instruments with the widest adherence in the international security architecture.

Yet, the road goes on. With the ratification of eight key states pending before the CTBT can enter into force, we still have work to do. Thankfully, we do not have to go down this road alone. The efforts of the Friends of the CTBT and the co-coordinators of the Article XIV process (formally, the Conference on Facilitating Entry Into Force of the CTBT) have played and will continue to play a vital role in this regard.

It is worth recalling what all countries have to gain from the entry into force of the treaty. Testing moratoria are certainly useful in their own right, but only an in-force CTBT will establish a legally binding norm and deliver a robust on-site inspection mechanism. Movement on the treaty would buttress the nuclear nonproliferation regime and would help build the confidence needed to move forward on a number of related issues, regionally and globally. Most importantly, it would bring a permanent end to the destabilizing practice of nuclear testing and constitute a firm barrier to a resumption of the nuclear arms race.

As I look ahead to this year, I do so without the foreboding that afflicts some in the arms control community. Instead, I see a road replete with opportunities for more steps forward. For example, in June the CTBTO will hold its Science and Technology 2017 Conference, the sixth in a series of multidisciplinary conferences designed to keep us at the forefront of scientific and technical innovation. Following the recent treaty ratifications by Myanmar and Swaziland, we expect Thailand to follow suit in the coming months, bringing us one step closer to universalization. These and other positive advances can be expected in 2017.

Of course, navigating a course to full legal implementation of the treaty will require strength, determination, and most importantly, unapologetic ambition. On my recent visit to China, I was struck by the ancient proverb, “Do not be afraid of a long road to success; only be afraid of a shortage of ambition.” The CTBT may be an ambitious goal, but it is a road well worth taking.

Lassina Zerbo is executive secretary of the Preparatory Commission for the Comprehensive Nuclear-Test-Ban Treaty Organization.