India and Japan signed a nuclear cooperation agreement that will allow New Delhi to purchase material and technologies from Japan for its civilian nuclear program.

Japanese Prime Minister Shinzo Abe and Indian Prime Minister Narendra Modi signed the agreement in Tokyo on Nov. 11 after six years of negotiations. Modi called the accord a “historic step” for India’s “engagement for a clean energy partnership.” 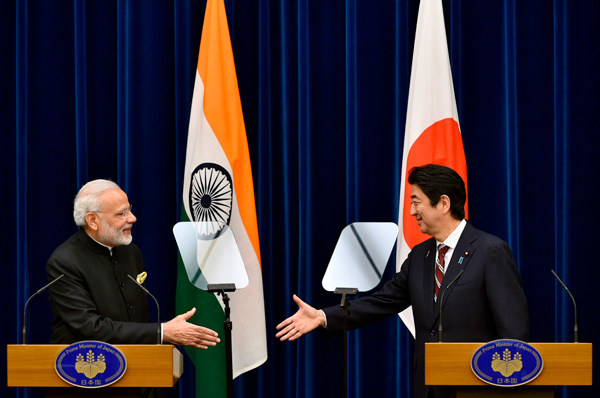 The deal will help New Delhi realize its ambitious plans to expand its civilian nuclear power program. According to the World Nuclear Association, India currently has 21 operating nuclear power reactors, six units under construction, and plans for more than 20 additional reactors.

India is able to engage in nuclear commerce because it received a waiver from the Nuclear Suppliers Group (NSG) in 2008. The waiver allows New Delhi to purchase nuclear technology from NSG members, such as Japan, for peaceful uses despite not having ratified the nuclear Nonproliferation Treaty and having placed only some of its nuclear facilities under International Atomic Energy Agency (IAEA) safeguards. (See ACT, October 2008.)

Abe said that the deal sets up a “legal framework to assure that India acts responsibly.”

The nuclear material and technology purchased by India under the deal with Japan will be subject to IAEA safeguards. India and the IAEA reached an agreement in 2009 for a limited number of its nuclear facilities to be placed under safeguards.

Under the agreement with Japan, India is also permitted to reprocess spent nuclear fuel and enrich uranium, although not to weapons-grade levels, and it is required to account for all of the nuclear material transferred under the agreement.

Opponents of the deal have argued that India can exploit these provisions to produce fissile material for its nuclear weapons program. In a Nov. 11 statement, Shaun Burnie, a senior nuclear specialist for Greenpeace, said that there is “no effective separation between India’s nuclear energy program and its weapons program” and that the agreement will “support further nuclear weapons proliferation in Asia.”

Abe has defended the agreement as “in line with Japan’s position to promote nonproliferation.” The agreement contains clauses that allow Tokyo to nullify the agreement and require New Delhi to return any materials or technologies purchased from Japan if India conducts a nuclear test. Prior to the return of materials, the two countries would jointly assess the safety considerations of halting work at any facility and conduct a security assessment to determine if India’s actions were prompted by a “changed security environment.”

India conducted nuclear explosive tests in 1974 and 1998 and has declared a nuclear testing moratorium unilaterally since then. New Delhi has not signed or ratified the Comprehensive Test Ban Treaty.

Indian Foreign Secretary S. Jaishankar said on Nov. 11 that provisions of the deal are “broadly” in line with nuclear cooperation agreements India has signed. India agreements with several other countries, including France, Russia, and the United States.