The United States and Russia met in the Intermediate-Range Nuclear Forces (INF) Treaty’s implementation forum last month “to discuss questions relating to compliance with the obligations assumed under” the 1987 agreement, according to a State Department press release.

The Special Verification Commission meeting, which was called by the United States over alleged Russian treaty violations, took place in Geneva on Nov. 15-16, the State Department said. (See ACT, November 2016.) Last convened 13 years ago, the commission was established by the treaty as the forum to discuss compliance disputes and to “agree upon such measures as may be necessary to improve the viability and effectiveness” of the treaty. 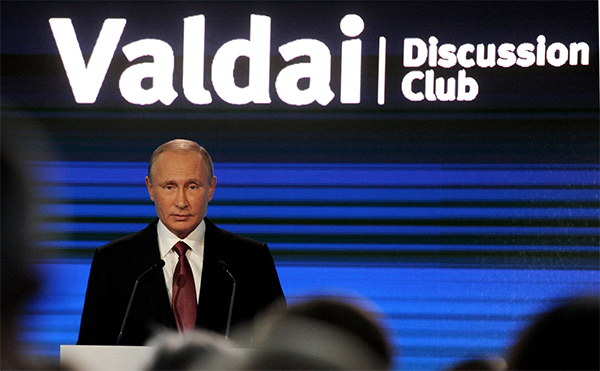 The United States continues to stand by the assessment, first made publicly in July 2014, that Russia is in violation of its INF Treaty obligations “not to possess, produce, or flight-test” a ground-launched cruise missile having a range of 500 to 5,500 kilometers or “to possess or produce launchers of such missiles.”

Russia denies that it is breaching the agreement and has countered with its own charges of noncompliance by Washington. It asserts that the United States is placing a missile defense launch system in Europe that can also be used to fire cruise missiles, using missiles with similar characteristics to INF Treaty-prohibited intermediate-range missiles in missile defense tests, and making armed drones that are equivalent to ground-launched cruise missiles.

The United States disputes the Russian charges and maintains it is in compliance with the agreement.

It is not clear whether the November meeting made progress toward resolving the compliance disputes or whether the parties agreed to meet again. A State Department official told Arms Control Today in a Nov. 17 email that the department had nothing to announce beyond that the meeting took place. The session marked the 30th meeting of the commission since the treaty took effect.

In an Oct. 27 press conference at the Valdai Discussion Club in Sochi, Russia, Russian President Vladimir Putin said that almost all of Russia’s neighbors possess missiles of the range prohibited by the INF Treaty “whereas none of the countries sharing borders with the United States…manufacture such weapons.”

“So, for us” the agreement “is a special test,” Putin said. “But nevertheless, we believe it is necessary to honor this treaty.”