For decades, U.S. presidents from both parties have been confronted with a range of nuclear weapons perils. So far, despite several near misses and close calls, we have avoided catastrophe and limited the spread of nuclear weapons to nine states. But with the election of Donald Trump, the United States and the world move into uncharted and dangerous nuclear territory. 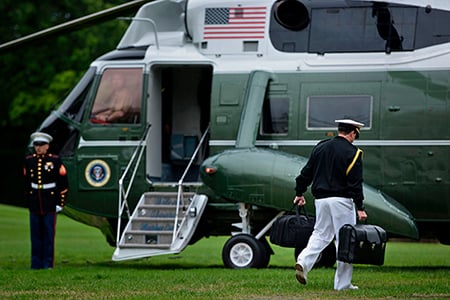 Beginning Jan. 20, the devastating power of the U.S. nuclear arsenal will be under the control of an impulsive and unpredictable commander-in-chief. During the 2016 campaign, Trump made a number of casual and deeply troubling statements that suggest he has a poor understanding of the unique dangers posed by nuclear weapons and may not be up to the task of managing the risks.

When asked in January 2016 when he might consider using nuclear weapons, Trump said, “Well, it is an absolute last stance…[but] you want to be unpredictable,” implying that he might engage in dangerous nuclear brinksmanship in a crisis.

Trump said it would be acceptable if Japan or South Korea sought their own nuclear weapons to counter North Korea’s because, he claimed, “it’s going to happen anyway.” Such an attitude contradicts decades of U.S. policy and undermines the global consensus against proliferation.

Trump also pledged to “dismantle” the 2015 agreement between six world powers and Iran, which is verifiably working to block Iran’s pathways to the bomb. If he tries even to “renegotiate” the deal, he would open the door to the rapid reconstitution of Iran’s capabilities, alienate all major U.S. allies, and trigger another disastrous war in the Middle East. If Trump or the Republican-led Congress sabotage the deal, they will own the grave geopolitical consequences.

Unlike President Barack Obama, who came into the White House with a detailed nuclear threat reduction game plan, Trump has no discernable strategy for managing today’s most daunting nuclear challenges.

The most urgent problem is North Korea’s growing nuclear weapons capability. Even with tougher international sanctions, the North’s program will continue to advance, and calls for nuclear weapons in South Korea will grow. With additional nuclear and missile tests, Pyongyang could have an operational arsenal of several dozen nuclear-armed, medium-range ballistic missiles by the end of Trump’s first term.

During the campaign, Trump said he would be willing to talk with North Korea’s leader, but he also suggested the problem could be outsourced to China. In reality, Beijing will not exert what influence it has without clear U.S. support for a renewed and wide-ranging dialogue with Pyongyang.

Shortly after Inauguration Day, Trump should direct a personal representative to communicate the United States’ interest in a deal leading to denuclearization and a formal end to the Korean conflict. As a first step, the parties should agree to a verifiable halt of further North Korean longer-range missile and nuclear tests and fissile material production and a temporary cessation of major U.S. military exercises in the region. This approach does not guarantee success, but maintaining the current policy assures failure.

Trump must also engage with Russian President Vladimir Putin to defuse rising tensions and head off a NATO-Russia confrontation that could lead to nuclear war. To do so, his still-to-be-named team will need to revitalize existing risk reduction and confidence-building mechanisms, ensure that Russia respects international borders, preserve the 1987 Intermediate-Range Nuclear Forces Treaty, address Russian fears about U.S. missile interceptor capabilities, and develop rules of the road to prevent destabilizing cyberattacks.

The risk of catastrophic miscalculation remains far too high. Until 2021, each side is allowed to deploy 1,550 strategic nuclear warheads, hundreds of which are primed for launch under attack. For a start, Trump and Putin should reaffirm that there can be no winner in a nuclear war and agree to a sustained dialogue on strategic stability.

If Trump can persuade Congress not to expand costly missile interceptor programs and respects the U.S. nuclear test ban and no-new-nuclear-warhead policies, he may find Russia willing to jointly slash strategic nuclear forces by one-third below the limits of the 2010 New Strategic Arms Reduction Treaty.

Such a step would ease tensions and reduce fears of a new nuclear arms race, plus it would reduce the skyrocketing price of nuclear weapons. The current all-of-the-above plan to replace and upgrade the U.S. nuclear triad and supporting infrastructure is projected to cost more than half a trillion dollars over the next 20 years and is unsustainable. By reducing nuclear excess and delaying program schedules, deterrence requirements can be met while saving tens of billions of taxpayer dollars.

The most serious test of any president is whether and how they reduce global nuclear dangers and avoid miscalculation in a nuclear crisis. To succeed or at least avoid major mistakes, the Trump administration must discard reckless campaign rhetoric and learn how to build on his predecessors' substantial efforts to strengthen the taboo against the spread and use of nuclear weapons.