North Korea is the biggest blemish on President Barack Obama’s nonproliferation record. Pyongyang’s four nuclear tests and more than 50 missile and rocket launches during the past eight years have given it a capacity to rain nuclear warheads on its regional adversaries and a good start to be able soon to reach the U.S. homeland. 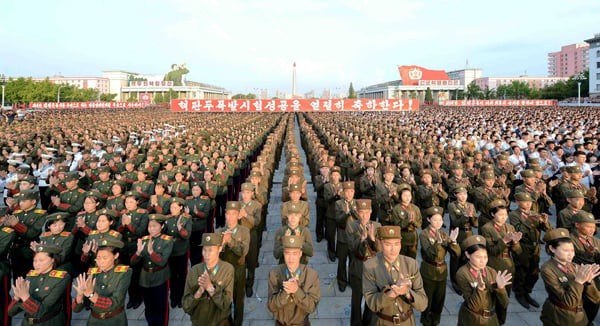 Early in Obama’s term of office, North Korea displayed a uranium-enrichment program to complement its plutonium production. For ways to deliver nuclear weapons, it successfully tested submarine-launched systems; intermediate-range, road-mobile Musudan missiles; and satellite-launch rockets that employ technologies useful for intercontinental-range missiles. Nuclear armament became etched in the country’s constitution and posture. Pyongyang now insists it will never give up its nuclear-armed status. The six-party talks that once showed promise of a path to dismantling the nuclear program are dead, the parties not having met since before Obama took office.

A failed North Korea policy is not unique to Obama. His predecessor, President George W. Bush, saw arguably worse breakthroughs by Pyongyang, with a quadrupling of separated plutonium holdings and its first nuclear test. North Korea fixed its nuclear path well before Obama’s presidency and met his offer of an open hand with a three-stage rocket launch and nuclear test within his first four months in office. Obama’s commendable effort to halt the strategic weapons development, via the 2012 Leap Day deal that promised a moratorium on nuclear and missile tests as well as enrichment, was a bust. Within a few weeks, the North’s new young leader, Kim Jong Un, ordered the testing of a space rocket as his diplomats improbably claimed that this was not covered by the agreement. Kim’s duplicity sapped Obama’s will to risk any more political capital on engagement, although there were some quiet efforts that went unrequited.

The administration no longer uses the term “strategic patience,” but it is an apt moniker for a policy of holding to the demand that North Korea return to the goal of denuclearization as a condition for talks. Instead, the Obama team loaded its eggs in the sanctions basket, finally this year ratcheting the pressure up to the level of the biting penalties that had been imposed on Iran. It is too early to judge these sanctions a failure. In Iran’s case, harsh sanctions were in place for a year and a half before Tehran agreed to serious negotiations. It will likely take longer for North Korea, given its greater insularity and Chinese lifeline. Would that the tough measures had been imposed earlier.

The Obama team can boast success in maintaining an international consensus in dealing with North Korea. Unlike under the previous administration, Seoul and Tokyo have seen eye to eye with Washington on the issue. Peace on the Korean peninsula has been preserved, as has UN Security Council unity, with China and Russia reluctantly agreeing to the tougher sanctions. Spotty Chinese implementation has improved. This autumn, the United States adeptly coordinated secondary sanctions on Dandong Hongxiang Industrial Development Company Ltd., a major Chinese supplier to North Korea. Beijing itself targeted the firm with a criminal investigation.

If President Donald Trump is able to roll back North Korea’s nuclear program, it will be due in part to the groundwork Obama laid. Alternatively, if the threat increases, the blame will be shared by successive administrations. The North Korean case may prove the adage that if a country is absolutely determined to acquire nuclear weapons, it will. Whether it will be allowed to keep them will be the test for the incoming administration.

Mark Fitzpatrick is executive director of International Institute for Strategic Studies-Americas, and head of the IISS Non-Proliferation and Nuclear Policy Programme.