President Barack Obama came into office determined to bring new energy to nuclear and biological threat reduction and nonproliferation efforts. In rapid succession, his 2009 Prague speech, the nuclear security summit process he started in 2010, and the 2009 National Strategy for Countering Biological Threats sparked hope for reducing threats from weapons of mass destruction (WMD). Yet, chemical weapons, the junior member of the WMD triumvirate, scored nary a mention in the administration’s early days, except as chemical weapons demilitarization lagged behind U.S. commitments under the Chemical Weapons Convention (CWC).

The chemical weapons challenge forced itself onto the president’s agenda in 2011 as NATO launched air strikes against the military forces of Libyan dictator Moammar Gaddafi and experts worried that his regime’s hundreds of metric tons of mustard agent and chemical weapons precursors, which were awaiting destruction, could fall into the wrong hands. Those concerns grew following 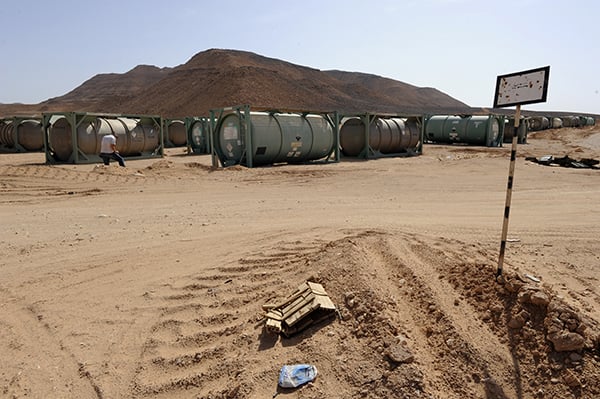 To little fanfare, the remaining stockpile of weapons and materials was destroyed by mid-2014, thanks to an enormous effort from many across the U.S. government and international community who worked quietly and behind the scenes at record speed with a barely functioning Libyan government and amid deteriorating security conditions. Throughout 2015, as security concerns in Libya mounted and the Islamic State group’s interest in chemical agents became apparent, the international community again stepped in, passing a UN Security Council resolution that assembled a coalition to remove and destroy the last 500 metric tons of chemical precursors that remained in Libya.

If Libya can be considered a success for Obama’s chemical weapons legacy, the broader picture, especially in Syria, is far more mixed.

International attention shifted to Syria in late 2011, where one of the largest active military chemical weapons programs lived a treacherous co-existence with a civil war and unfolding humanitarian catastrophe. Fears deepened that elements of Syria’s chemical weapons program could fall into terrorists’ hands or be transferred to Iranian proxies. These dangers, coupled with the prospect of chemical weapons use in the conflict, prompted Obama to draw his now infamous August 2012 “red line.”

Although Syrian President Bashar al-Assad’s chemical stocks seemed relatively secure, low-level attacks with chemical weapons persisted throughout 2013, escalating to the August 21 sarin attacks near Damascus that killed an estimated 1,300 civilians, more than 400 of them children. This attack is the deadliest confirmed chemical weapons use against civilians since the 1988 Halabja massacre in Iraq by dictator Saddam Hussein. It brought the United States to the brink of military intervention and prompted a U.S.-Russian accord to remove and destroy Syrian chemical weapons capabilities. Execution of this agreement by the United Nations, the Organisation for the Prohibition of Chemical Weapons (OPCW), and several nations showed creativity, flexibility, and courage in eliminating the vast majority of one of the largest known active chemical weapons programs.

Unlike Libya, however, Syria relinquished its chemical weapons program under coercion. Syria’s superficial commitment to the CWC and its accompanying obligations has led to uneven implementation, declarations less than fully forthcoming, and obstructionist behavior. Chemicals, including chlorine, have been used repeatedly over the last three years, driving home the sad reality that although these weapons have limited military utility, they are cheap and effective weapons of terror against unprotected populations. Reports of Islamic State use of mustard-like blister agents in Iraq and Syria further emphasize that the taboos and norms against the proliferation and use of chemical weapons are under profound pressure.

The UN and OPCW deserve credit for establishing, at the urging of the United States and other like-minded nations, the OPCW fact-finding mission and the Joint Investigative Mechanism (JIM), two innovative approaches to unprecedented challenges in a politically fraught environment. The JIM completed its initial investigation and assigned blame for three chlorine cases to Syrian regime military forces and one blister agent case to Islamic State fighters.

Accountability and consequences, which lie at the heart of deterrence, rest with the UN Security Council, but the next steps remain unclear. Moreover, the credibility of the nonproliferation regime as a system of laws cannot survive without enforcement in the face of blatant noncompliance. Holding perpetrators responsible is essential to turn the tide and prevent a growing normalization of chemical weapons use in the Middle East and beyond.

Today, this crisis of confidence may be confined to the chemical weapons arena; but can the biological, radiological, and possibly even nuclear arenas be immune in the face of continued inaction? Hence, the legacy of the Obama years may not be clear for some time.

Rebecca Hersman is director of the Project on Nuclear Issues and senior adviser for the International Security Program at the Center for Strategic and International Studies.