– George Stephanopolous
Host of ABC's This Week
January 1, 2005
The Strengthened Review Process for the Nonproliferation Treaty 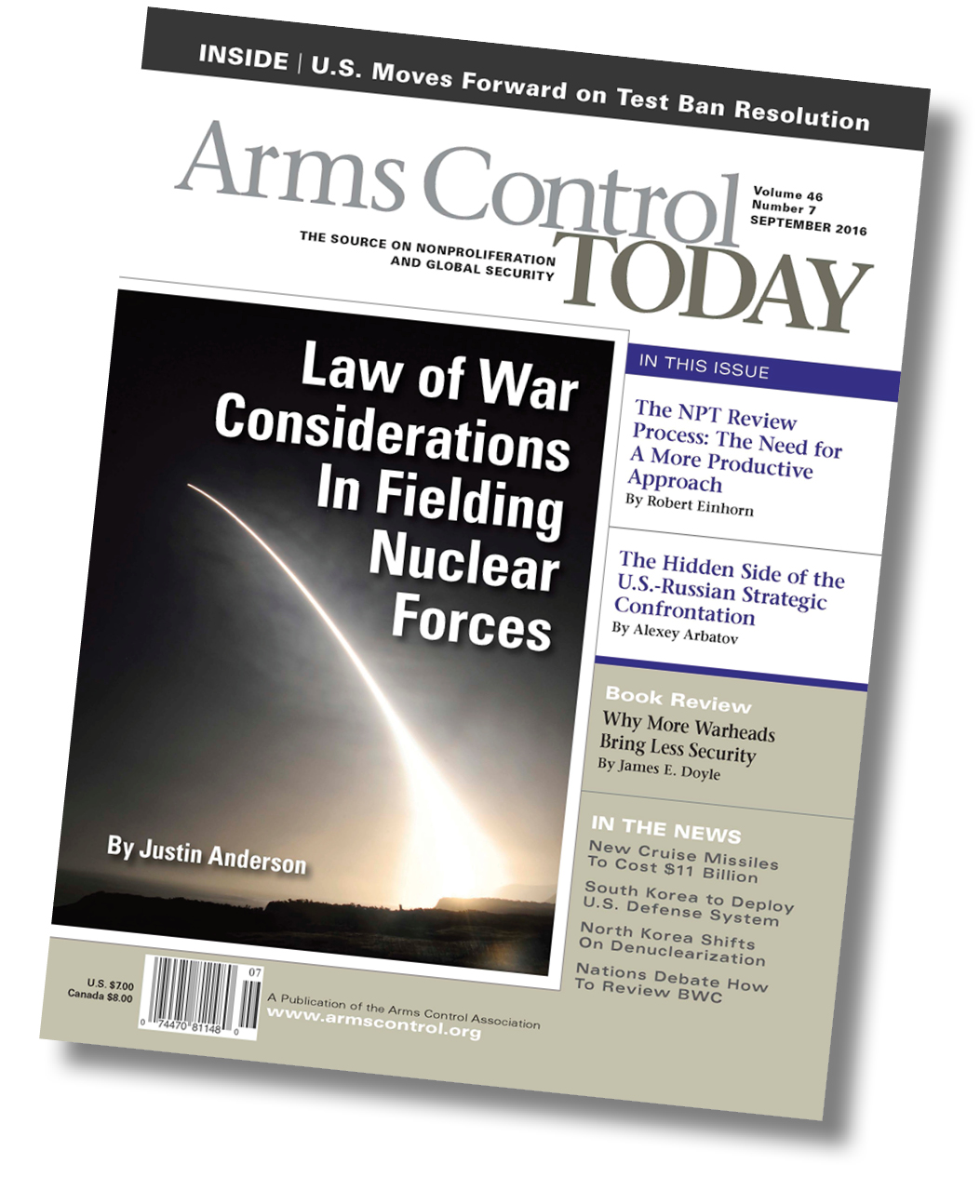 In his article (“The NPT Review Process: The Need for a More Productive Approach,” September 2016), Robert Einhorn proposes that states-parties to the nuclear Nonproliferation Treaty (NPT) desist from striving to achieve a “comprehensive, consensus final document” at the 2020 NPT Review Conference. Rather, he calls for the conference to produce an accurate summary report that assesses NPT implementation, reflecting differences in the views among participating nations, and a forward-looking section on strengthening the NPT that includes both agreed proposals and those not agreed. He bases these and other recommendations on the grounds that the treaty itself does not provide specific guidance on the conduct and outcome of review conferences.

While several of his proposed solutions to a seemingly dysfunctional NPT review process might appear attractive, none are really new. All have been tried in one way or another in the 1995-2000 and 2000-2005 review periods, including reports reflecting areas of agreement and disagreement, but all efforts failed due to the stubborn inflexibility of the participating nations.

As someone who was closely involved with the development of the NPT “strengthened review process” in 1995 and 2000, I feel obligated to point out that the perceived shortcomings lie not in the process itself but in its deficient implementation by the states-parties.

Contrary to Einhorn’s assertion, elaborate agreed guidance exists for the conduct of the review process—it is uncomplicated, easy to understand, and not difficult to implement given good faith, political will, and adequate advance preparations by states-parties. But it has not been implemented in good faith.

Unfortunately, differences between nuclear-weapon states and non-nuclear-weapon states and among the non-nuclear-weapon states, especially on nuclear disarmament and the establishment of a Middle Eastern zone free of weapons of mass destruction, have been growing unchecked. The resulting rancour, opprobrium, and nonfulfillment of agreed decisions and recommendations led to a collapse of the review process in the 1995-2000, 2000-2005, 2005-2010, and 2010-2015 preparatory committee sessions and to the failure of the 2005 and 2015 review conferences (with a partial success in 2010). Practical ideas to produce better outcomes all were rejected by different groupings of states-parties largely on flimsy grounds.

Unwilling to place the blame for these failures where it correctly belongs, many delegates and observers have taken the easy road of blaming the review process.

The “strengthened review process” was envisioned to preserve and enhance the authority and integrity of the NPT across all its principal provisions, based on three underlying principles: (1) permanence with accountability, (2) a qualitatively strengthened, on-going review process that evaluates and is forward looking, and (3) pragmatism and dynamism on an evolving basis. In this regard, the strengthened review process aims to be a “living process” responsive to developments affecting the objectives of the NPT and “product oriented” in line with the provisions established in 1995, that is to produce a final document agreed by consensus to give it requisite authority.