The Cold War standoff that gave rise to tens of thousands of nuclear weapons ended a quarter century ago, and U.S. and Russian deployed arsenals have been slashed through verifiable arms control agreements.

Unfortunately, the risks of nuclear weapons use are still far too high, in part because the policies developed to justify their possession and potential use remain largely the same. 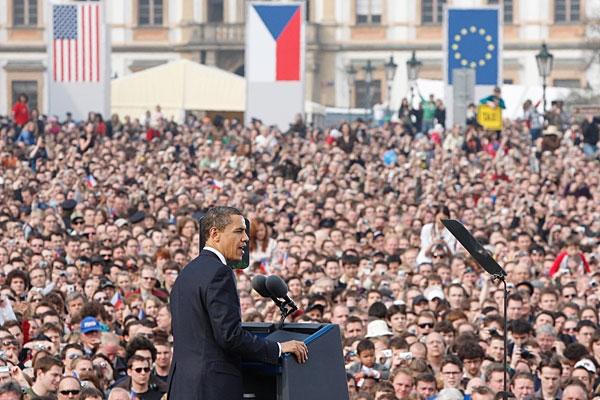 Early in his presidency, President Barack Obama made clear that he sought “to put an end to Cold War thinking” and pledged to “reduce the role of nuclear weapons in our national security strategy and urge others to do the same.”

On June 6, deputy national security adviser Ben Rhodes pledged that the president “will continue to review whether there are additional steps that can be taken to reduce the role of nuclear weapons in our own strategies and to reduce the risk of inadvertent use.”

One very important step would be for Obama to declare that the United States will not be the first to use nuclear weapons. Such a decision could unwind dangerous Cold War-era thinking and greatly strengthen U.S. and global security.

Limiting the circumstances under which the United States would use nuclear weapons was a goal laid out by the “Nuclear Posture Review Report” in 2010, which said the United States should pursue the objective of making deterrence against a nuclear attack the “sole purpose” of the nuclear arsenal.

Nevertheless, current policy still leaves several dangerous and destabilizing nuclear weapons-use options on the table, including the option to use nuclear weapons first in a conflict to pre-empt a real or suspected nuclear attack, to counter the possible use of chemical or biological weapons, or to halt a massive conventional military threat against U.S. forces or allies.

Today, the United States and Russia still deploy thousands of nuclear warheads on hundreds of bombers, missiles, and submarines. Current U.S. strategy requires that there are enough nuclear forces available to destroy nearly 1,000 enemy targets, many in urban areas, and that these weapons can be launched within minutes of a decision to do so.

Maintaining such a capability plays a large role in compelling Russia—and may soon help to lead China—to field a sizable portion of their nuclear forces in a launch-under-attack mode in order to avoid a disarming nuclear strike. This, in turn, increases the chance that nuclear weapons might be used or dispersed by U.S. adversaries in a crisis.

As Obama correctly said in 2008, the requirement for prompt launch is “a dangerous relic of the Cold War. Such policies increase the risk of catastrophic accidents or miscalculation.”

By adopting a no-first-use policy, the United States could positively influence the nuclear doctrines of other nuclear-armed states, particularly in Asia. Such a shift in U.S. declaratory policy could also alleviate concerns that U.S. ballistic missile defenses might be used to negate the retaliatory potential of China and Russia following a pre-emptive U.S. nuclear attack against their strategic forces.

Shifting to a no-first-use policy would not, in any way, undermine the U.S. ability to deter nuclear attack by another state. It is well established that U.S. nuclear forces and command-and-control systems could withstand even a massive attack, and given the size, accuracy, and diversity of U.S. forces, the remaining nuclear force would be more than sufficient to deliver a devastating blow to any nuclear aggressor.

Given the overwhelming U.S. conventional military edge, there is no plausible circumstance that could justify—legally, morally, or militarily—the use of nuclear weapons to deal with a non-nuclear threat. U.S. nuclear weapons are useless in deterring or responding to nuclear terrorism or to a potential chemical, biological, or cyberattack by state or nonstate actors.

A no-first-use policy would not undermine confidence in U.S. defense commitments to key allies. Even if there were to be a conventional military conflict with a nuclear-armed state, such as Russia in the Baltic Sea region or elsewhere, the employment of nuclear weapons would be counterproductive because it would trigger an uncontrollable and potentially suicidal escalation of nuclear weapons use. As a result, the threat of nuclear weapons first-use to counter non-nuclear attacks lacks credibility.

In remarks delivered in Hiroshima May 27, Obama declared that “among those nations like my own that hold nuclear stockpiles, we must have the courage to escape the logic of fear and pursue a world without them.” Yes, we must.

A U.S. no-first-use policy would reduce the risk of nuclear catastrophe, improve the prospects for further Russian nuclear cuts, and draw China into the nuclear risk reduction process. It would put a spotlight on the dangerous nuclear doctrines of Pakistan and North Korea, where the risk of nuclear weapons use is perhaps most severe, and challenge them to reconsider the first-use option.

By encouraging a new norm against first-use of nuclear weapons, Obama could help ensure, for this generation and those to come, that nuclear weapons are never used again.