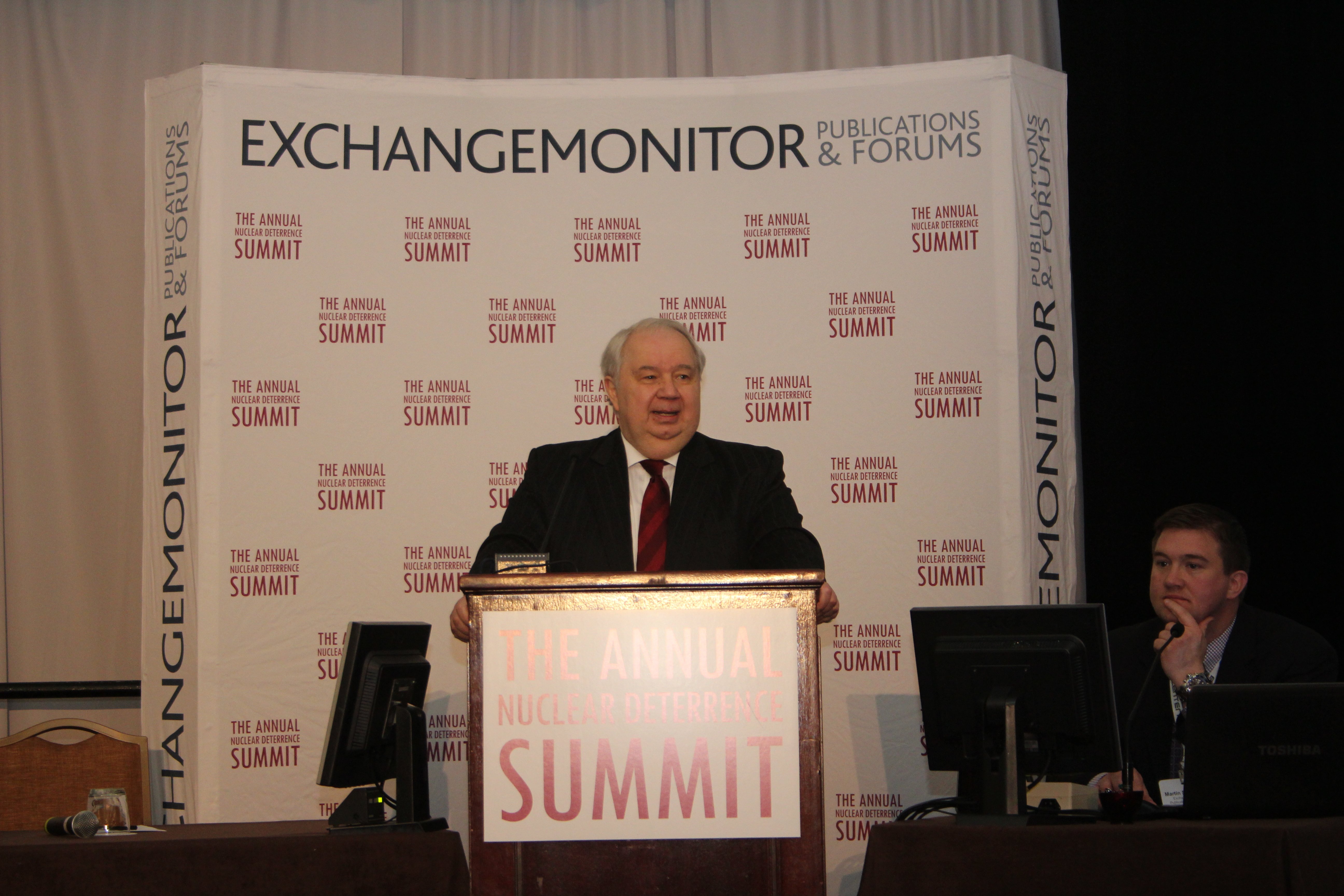 Russia’s ambassador to the United States reaffirmed his country’s commitment to the 2010 New Strategic Arms Reduction Treaty (New START) last month amid questions about the value of the agreement from influential voices in both countries.

Speaking on Feb. 18 at a conference in Washington, Sergey Kislyak said, “I don’t foresee developments—I hope I am right—that would force at least Russia to reconsider its commitment” to New START. The treaty constitutes “a very serious undertaking, and we are taking it seriously,” he added.

Rose Gottemoeller, U.S. undersecretary of state for arms control and international security, also spoke at the conference and reiterated the U.S. commitment to the treaty. “It is [in] times like these that arms control proves its worth,” she said, referring to the current tensions between the United States and Russia over Ukraine. “Arms control measures provide stability and predictability even when other things fall into disarray.”

New START, which entered into force in February 2011, limits the United States and Russia to 1,550 deployed strategic nuclear warheads; 700 deployed intercontinental ballistic missiles (ICBMs), submarine-launched ballistic missiles (SLBMs), and long-range bombers; and 800 deployed and nondeployed ICBM launchers, SLBM launchers, and long-range bombers. Each side has until 2018 to meet the treaty caps. The pact also contains transparency and verification provisions, including on-site inspections, to ensure compliance.

Kislyak’s endorsement of New START comes on the heels of a recent warning by a high-ranking Russian Foreign Ministry official that Moscow could rethink its commitment to the agreement in light of allegedly hostile U.S. actions toward Russia.

“I am not ruling out the possibility that Washington could force us to…adjust our policy in this area,” Mikhail Ulyanov, the head of the Russian Foreign Ministry’s Department for Non-Proliferation and Arms Control, told RIA Novosti on Jan. 13.

“It would be quite natural, considering the unfriendly nature of U.S. actions [in regard to Russia],” he added.

The United States has condemned Moscow for annexing Crimea and supporting rebel forces in eastern Ukraine. Washington and many of its NATO allies have imposed sanctions against Russia and strengthened the alliance’s eastern defenses.

Ulyanov was not the first Russian official to suggest New START could be at risk due to tensions in the U.S.-Russian relationship over Ukraine.

Last March, shortly after Russia’s annexation of Crimea, unnamed Russian Defense Ministry officials told RIA Novosti and other Russian media outlets that Moscow was prepared to suspend its permission for the United States to carry out inspections as required under New START because “groundless threats to Russia from the U.S. and NATO regarding its Ukrainian policy are considered by us as an unfriendly gesture and allow us to declare a force majeure.” According to the protocol to New START, the only basis for the cancellation of inspections is “circumstances brought about by force majeure,” an unexpected event that is beyond the control of the inspected party.

Meanwhile, the Republican-led U.S. House of Representatives has passed legislation in each of the past four years that would have threatened the U.S. ability to implement the treaty.

The version of the fiscal year 2015 National Defense Authorization Act that the House passed last year barred spending any money to carry out the reductions required by New START until Russia met a number of conditions, including “respecting the sovereignty of all Ukrainian territory.” But the Democratic-led Senate opposed this language, and the final bill merely requires a report from the Defense Department stating the reasons that continued implementation of New START is in the national security interests of the United States. (See ACT, January/February 2015.)

In a Feb. 19 interview, a Senate Republican staffer said the new Republican-led Senate would prefer not to “relitigate” New START. The staffer said that “curing” Russia’s violation of the 1987 Intermediate-Range Nuclear Forces (INF) Treaty will likely be a higher Senate Republican priority, along with pressing ahead with U.S. nuclear weapons modernization plans and guarding against potential Obama administration proposals to reduce U.S. nuclear weapons below New START levels without a new treaty.