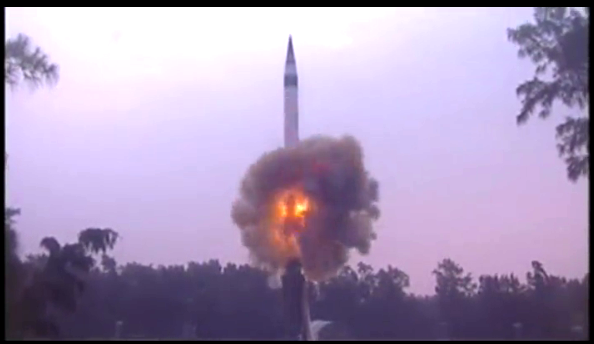 India successfully tested its Agni-5 ballistic missile from a road-mobile canister for the first time in January, moving the missile one step closer to deployment, according to an Indian official.

Avinash Chander, director-general of India’s Defence Research and Development Organisation (DRDO), said in Jan. 31 statement that the success of that day’s test from the mobile canister is “a new milestone,” allowing the Indian armed forces to “stop anywhere and launch” the Agni-5.

The three-stage missile is solid fueled and can carry a 1,500-kilogram payload a distance of 5,000 kilometers, according to news reports of past tests and information released by the DRDO. A 5,000-kilometer range puts all of China within reach.

A range of 5,500 kilometers is generally considered the threshold between intermediate-range and intercontinental ballistic missiles. A missile’s range can be extended by lightening its payload.

Chander said that the road-mobile canister for the Agni-5 makes it “highly survivable” and provides an assured retaliatory capability. Such a capability is important, given India’s no-first-use policy for nuclear weapons, he said.

In a Jan. 31 statement, Indian Prime Minister Narendra Modi congratulated the DRDO on the successful test and said the Agni-5 is a “prized asset” for India’s forces.

The Modi government terminated Chander’s contract as head of the DRDO earlier in January. Chander left the organization on Jan. 31, after the test was completed.

Chander said that one more test is necessary before the Agni-5 can be deployed as part of India’s nuclear arsenal. After that, “the objective is to begin induction by the end of this year” if possible, he said.

Chander said the DRDO is not currently working on missiles with ranges longer than the Agni-5. Although technically possible, the Agni-5 “takes care of our existing threat perceptions,” he said.