Conference, the United States and most other nuclear-weapom states have continued to vote against resolutions aimed at accelerating progress toward the elimination of nuclear weapons at the UN disarmament committee in New York. 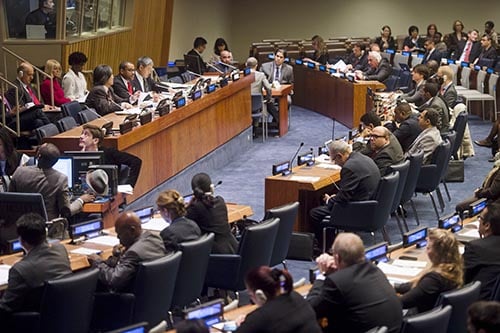 Four of the five countries recognized as nuclear-weapon states by the NPT (France, Russia, the United Kingdom, and the United States) voted against a resolution calling for the “urgent commencement” of negotiations in the Conference on Disarmament (CD) in Geneva to pursue the “early conclusion” of a comprehensive convention on nuclear weapons to prohibit their “possession, development, production, acquisition, testing, stockpiling, transfer and use or threat of use, and to provide for their destruction.” (See ACT, December 2013.) In the UN General Assembly First Committee, which deals with nuclear disarmament, 135 countries supported the resolution.

The resolution was one of several offered this year that the committee has considered in previous years.
China was the only recognized nuclear-weapon state to support the resolution. India and Pakistan also voted in favor of the resolution; Israel and North Korea opposed it.

India, Israel, and Pakistan have nuclear weapons, but are not members of the NPT. North Korea joined the NPT, but announced its withdrawal from the treaty in 2003, an action that NPT members have not officially recognized.
In a joint statement, France, the UK, and the United States said that the call for a convention to abolish nuclear weapons “is not mentioned as such in the 2010 [NPT] Action Plan” and that “a practical step-by-step process is the only way to make real progress in our disarmament efforts.” At the May 2010 NPT Review Conference, the states-parties adopted a 64-point action plan across the three “pillars” of the NPT: nuclear disarmament, nonproliferation, and peaceful uses of nuclear energy.

The other states that voted against the resolution or abstained are members of NATO or are “nuclear umbrella” states that have nuclear security agreements with Washington, such as Japan.

According to a September 2014 analysis published on the website of Bulletin of the Atomic Scientists by Hans Kristensen and Robert S. Norris, there are approximately 16,300 nuclear weapons located at some 98 sites in 14 countries. Russia and the United States together possess 93 percent of the total global inventory.

Except for China and Pakistan, which abstained, every state with nuclear weapons also voted against a resolution titled “Towards a Nuclear-Weapon-Free World: Accelerating the Implementation of Nuclear Disarmament Commitments.” The supporters of the resolution, led by Brazil, Egypt, Ireland, Mexico, New Zealand, and South Africa, said they were “[d]eeply disappointed” with “the continued absence of progress towards multilateral negotiations on nuclear disarmament” and “urge[d] the Conference on Disarmament to commence, without delay, substantive work that advances the agenda of nuclear disarmament.”

The First Committee approved the resolution by a vote of 166-7 with five abstentions.

In addition, the United States joined France, Russia, and the UK as the only opponents of a resolution on “taking forward multilateral nuclear disarmament negotiations.” The resolution laments “the absence of concrete outcomes of multilateral nuclear disarmament negotiations within the United Nations framework for more than a decade.”

In an Oct. 7 statement to the First Committee, Rose Gottemoeller, U.S. undersecretary of state for arms control and international security, emphasized the importance of “patience and persistence” on the path toward nuclear disarmament. Gottemoeller suggested thinking about disarmament “in terms of how creeks and streams connect to form rivers. Over time, those mighty rivers are irreversible; they cut through massive and seemingly impenetrable stone on the way to their final destination.”

In an Oct. 8 statement to the First Committee, Mikhail Ulyanov, a Russian arms control official, said that the UN Disarmament Commission and the CD “have suffered stagnation for many years.” But he warned that shifting disarmament negotiations to “new fora” would “threaten to bring serious damage to the existing institutions.”

The sponsors of the First Committee resolutions calling for accelerating the pace of disarmament continue to stress that their efforts are consistent with the NPT. They note that Article VI of the treaty requires “effective measures relating to the cessation of the nuclear arms race at an early date and to nuclear disarmament” and that the 2010 NPT Review Conference agreed to “the objective of achieving a world without nuclear weapons.”