When the Arms Trade Treaty (ATT) enters into force Dec. 24, a longtime dream of international civil society—regulation of the world’s weapons market—will become reality. That is when the difficult work begins, treaty proponents say. 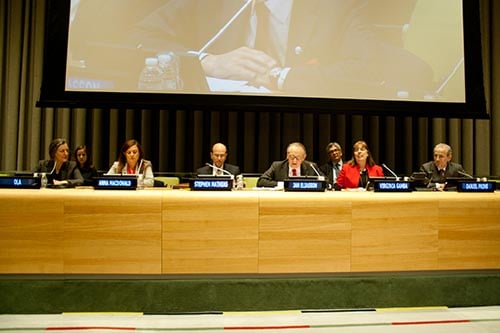 “Most states won’t be ready to implement the ATT when it enters into force,” predicted Rachel Stohl of the Stimson Center in a Nov. 17 interview. “And the ones that are ready can do more.”

The treaty, approved by the UN General Assembly in April 2013, is the first global, legally binding agreement to regulate the global market in weapons. More than 50 countries have ratified the treaty and must apply the treaty’s criteria when making decisions about the transfer of weapons ranging from small arms to battle tanks, combat aircraft, and warships. The treaty forbids transfers that support terrorism, organized crime, war crimes, genocide, or human rights abuses.

Another 68 countries, including the United States, have signed the treaty, but not ratified it.

The ATT’s two biggest initial obligations, according to Stohl, are the establishment of a national control system for the import and export of arms and the creation of a national control list of weapons whose transfer will be scrutinized under the criteria established by the treaty. Countries must file their first report on the import and export of arms by May 31, 2015, according to the UN Office for Disarmament Affairs, and their first report on implementation of the treaty by the end of 2015.

A survey of 44 countries that have signed or ratified the ATT, conducted by Stohl and arms analyst Paul Holtom, found that almost all of them have control lists.

The ATT preamble emphasizes “the need to prevent and eradicate the illicit trade in conventional arms and prevent their diversion,” but the treaty does not specify how countries should achieve this goal.

Countries can choose among measures such as preshipment checks, verification of end users, and improvements in dock security and port security, Stohl said. All countries have to “decide what will work best for them,” she said. According to Stohl, there will not be a global “denied persons list” or “approved brokers lists,” but “it makes sense for each country to share that kind of information.”

Participating countries held preparatory conferences for implementation of the ATT Sept. 8-9 in Mexico City and Nov. 27-28 in Berlin to discuss, among other issues, the treaty’s reporting requirements.

The scope of the ATT’s reporting requirements is “basically identical” to that of the main categories of the UN Register of Conventional Arms, Angela Kane, UN high representative for disarmament affairs, said at the Mexico City meeting. One difference, she noted, is that the ATT requires reporting on transfers of small arms. Data on such transfers are considered voluntary “additional background information” in the reporting for the register.

The Obama administration has not reported on U.S. efforts to prepare for the treaty because of a January 2014 congressional ban on expenditures “to implement the Arms Trade Treaty until the Senate approves a resolution of ratification” for it.

The administration has not issued a timetable for submitting the ATT to the Senate.