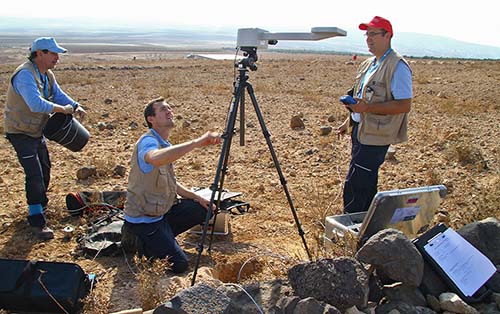 The objective of the five-week-long exercise, which will cost an estimated $10.3 million, including in-kind contributions from nine states and the European Union, is to test the CTBTO’s ability to determine whether a nuclear test explosion has taken place following the entry into force of the Comprehensive Test Ban Treaty (CTBT).

The month-long event, known as Integrated Field Exercise 2014 (IFE14), involves a multinational team of more than 200 experts and scientists, including officials from the fictitious CTBT state-party under inspection and an inspection team of 40 experts searching a rugged area of approximately 1,000 square kilometers for evidence of a nuclear test. The team is deploying a wide range of inspection techniques, including radionuclide, seismic, geophysical, and other methods, as would be permitted under an actual inspection if requested and approved by the CTBTO’s executive council of states-parties.

At a Nov. 15 briefing at the inspection area in Jordan, Oleg Rozhkov, the director of the On-Site Inspection Division and IFE14 project executive, described the exercise’s scenario. Under that scenario, the CTBT has been in force for six months when the CTBTO’s International Monitoring System (IMS) detects suspicious seismic readings and noble gas emissions indicative of a nuclear blast. Five days later, a state-party requests an on-site inspection; the Executive Council approves the request. Ten days after the initial readings, the inspection team moves in to set up a base of operations.

Fourteen days later and after negotiations with officials from the inspected state who claim the IMS’s readings were wrong, the first CTBTO team moves into the field using sensitive and mobile seismic and radiation monitoring equipment. Using visual surveys, aircraft reconnaissance, and satellite information to supplement the readings from the field equipment, the inspection team quickly narrows its search to four smaller areas of interest in the inspection zone. Once there, the team looks for more-definitive evidence of a prohibited nuclear explosion, such as the collapse of an underground cavity or emissions of additional noble gases.

“IFE14 demonstrates the CTBTO’s advanced capabilities” and shows that the organization is in “the last phase of [its] preparations for on-site inspections” and is ready for the CTBT’s entry into force, CTBTO Executive Secretary Lassina Zerbo said in a Nov. 18 interview.

Short-notice on-site inspections can only be requested and approved following the treaty’s entry into force. Under Annex 2 of the treaty, 44 specified countries must ratify the treaty to bring it into force. Eight of those 44 countries have not ratified the treaty.

The IMS consists of 337 stations, 85 percent of which are operational and transmitting data.

The exercise in Jordan is the most extensive since the CTBTO was established in 1997. In 2008 the CTBTO conducted its first IFE at the former Soviet nuclear test site located in present-day Kazakhstan. (See ACT, November 2008.)

Beginning in 2009, the CTBTO carried out a series of build-up exercises for IFE14 to practice specific methods, techniques, and sensor technologies in Austria, Finland, Hungary, and Jordan. These included testing special multispectral and infrared sensors used for overflight monitoring, as well as field-testing communications equipment to ensure it is secure from eavesdropping by inspected states-parties. Several training workshops on on-site inspections also were held, most recently in Yangzhou, China, in November 2013.

In combination with the CTBTO’s success in detecting North Korea’s three nuclear tests, the exercise in Jordan “proves that we’re ready to detect any type of nuclear test explosion,” Zerbo said in a separate statement issued Nov. 18.

The results of IFE14 will be evaluated at a workshop to be held in Israel in March 2015, which will be open to officials from all signatory states, including Egypt and Iran, according to CTBTO officials. Those two countries, along with Israel, are the region’s Annex 2 states.

“I am confident the exercise will prove that CTBT on-site inspections are a viable deterrent against would-be Treaty violators,” Rozhkov said.