North Korea is prepared to resume negotiations over its nuclear program without preconditions, according to Russia’s foreign minister.

Sergey Lavrov said on Nov. 20 that Russia had received the assurances from a North Korean special envoy who met with Russian President Vladimir Putin earlier in the week. 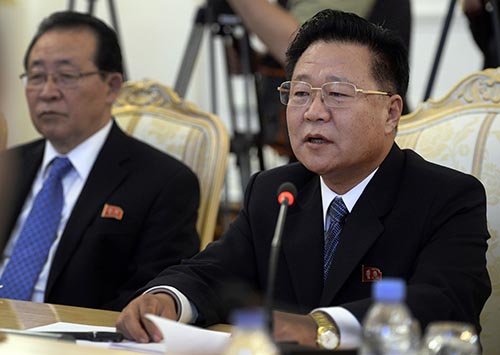 The envoy delivered a letter from North Korean leader Kim Jong Un, which said that Pyongyang wanted to restart multilateral talks and promised “cooperation in solving problems that are now lingering on the Korean peninsula,” according to Lavrov.

The so-called six-party talks, which include China, Japan, Russia, South Korea, and the United States, began in 2003 with the goal of dismantling North Korea’s nuclear program and continued intermittently until April 2009, when North Korea said it would no longer participate.

As part of the talks, North Korea committed to denuclearization in a 2005 joint statement with the other five countries. (See ACT, November 2013.)

On July 30, Glyn Davies, special representative for North Korea policy at the U.S. State Department, said that the United States is looking for substantial actions by North Korea on denuclearization before restarting talks. Davies said these actions could include steps by North Korea such as freezing its nuclear program and inviting inspectors from the International Atomic Energy Agency back into the country. North Korea expelled inspectors in 2009.

These preconditions are necessary because North Korea “increasingly rejects meaningful negotiations,” he said.
Davies was succeeded as special representative by Sung Kim on Nov. 6.

In a Nov. 26 e-mail to Arms Control Today, Duyeon Kim of the Carnegie Endowment for International Peace said, “Pyongyang seems to want arms control talks rather than denuclearization talks, which would be unacceptable for Washington and its other six-party partners.”

Due to domestic political pressures, the Obama administration needs an “obvious sign that Pyongyang is serious about denuclearization or else it would be too politically risky for Washington to resume six-party talks without some predictability that talks won’t fail again,” Kim said.

Lavrov’s Nov. 20 announcement came the same day that North Korea threatened a fourth nuclear test in response to a resolution passed by the UN Human Rights Committee on Nov. 18 that recommends referring North Korea to the International Criminal Court for human rights abuses.

Pyongyang’s Korean Central News Agency (KCNA) blamed the United States for orchestrating the resolution and said in a Nov. 20 article that “U.S. hostile action makes it hard for [North Korea] to exercise any restraint any longer in conducting a new nuclear test.”

North Korea tested nuclear devices in October 2006, May 2009, and February 2013 and is believed to have an arsenal of approximately eight to 12 nuclear weapons.

During the run-up to the 2013 test, experts had said North Korea might be attempting to test a miniaturized device that eventually could allow Pyongyang to place nuclear weapons on its missiles.

The KCNA statement on the day of that test said North Korea was testing a miniaturized device. The statement did not provide additional details, and the claim has been difficult for outsiders to substantiate.

On Oct. 25, however, Gen. Curtis Scaparrotti, commander of U.S. Forces Korea, told reporters that he believed that the North Koreans have “the capability to have miniaturized a device at this point and they have the technology to potentially actually deliver” such a device.

Scaparotti said he did not believe that North Korea has actually placed a nuclear weapon on a missile and acknowledged that his assessment was not based on “hard evidence” but on his own view of Pyongyang’s technological capabilities.

In April 2013, the U.S. Defense Intelligence Agency concluded with “moderate confidence” that North Korea had acquired the capability to place a nuclear weapon on a missile that has a range of less than 1,000 miles.

According to an April 2013 statement from James Clapper, the director of national intelligence, the U.S. intelligence agencies did not all reach the same conclusion, and President Barack Obama also disputed the claim.
South Korea has claimed for some time that North Korea could fit a nuclear warhead on a missile.

A former South Korean official told Arms Control Today last May that Pyongyang can “likely fit a nuclear warhead on a Rodong missile” although it is not certain that the warhead would detonate properly.

The medium-range Rodong missile, also known as the Nodong, is a deployed system with a range of 1,300 kilometers. This places South Korea, Japan, and parts of China within its range.

North Korea may also be pursuing the ability to launch ballistic missiles from a submarine.

According to an Oct. 18 analysis by Joseph Bermudez on 38 North, a website run by the U.S. Korea Institute at Johns Hopkins University, North Korea has a previously unidentified submarine at the Sinpo South Shipyard whose design resembles one used by Yugoslavia.

North Korea obtained submarine designs from Yugoslavia during the 1970s and has used the designs on its past submarine work, he said.

Although Bermudez said it was “too early to identify the missions intended for this new class of submarine,” it appeared to be “designed as a test bed for a submarine-launched ballistic missile.”

In a subsequent analysis on Oct. 28, Bermudez noted a new test stand at the Sinpo South Shipyard, “probably intended to explore the possibility of launching ballistic missiles from submarines or of a shipboard vertical launch ballistic missile capability.”

The latter would allow North Korea to launch ballistic missiles from surface ships.

Bermudez cautioned against exaggerating the threat posed by the submarine. He said that if North Korea decides to pursue this capability, “it will likely take years to design, develop, manufacture and deploy an operational submarine-launched ballistic missile force.”