Iran and six world powers extended negotiations on a comprehensive nuclear agreement for a second time after failing to reach a deal by Nov. 24.

Negotiators now see a “credible path” toward a comprehensive agreement and aim to conclude a deal by June 30, according to a Nov. 24 joint statement from Iranian Foreign Minister Mohammad Javad Zarif and the European Union’s Catherine Ashton, lead negotiator for the P5+1 (China, France, Germany, Russia, the United Kingdom, and the United States). The statement came after seven days of talks in Vienna.

In November 2013, Iran and the P5+1 reached an interim agreement and said they intended to complete negotiations on a comprehensive deal, for which they later set a deadline of July 20. On that date, however, negotiators announced that they would need additional time and extended the talks until Nov. 24. (See ACT, September 2014.)

Since the July extension, Iran and the P5+1 have met multiple times in a variety of formats, including a Nov. 9-10 meeting in Muscat, Oman, involving Ashton, Zarif, and U.S. Secretary of State John Kerry.

In the statement announcing the most recent extension, Ashton and Zarif said the two sides aim to reach a political agreement within four months and then complete the technical annexes for a comprehensive agreement before the June 30 deadline.

During the extension, both sides will continue to implement the 2013 interim agreement, the statement said. That agreement halts Iranian nuclear activities, provides limited sanctions relief from the P5+1, and allows Iran access to certain frozen assets. (See ACT, December 2013.)

Kerry, who joined the talks on Nov. 20, also delivered a statement on Nov. 24, saying that more time is needed because the issues are technical and complex and that the United States wants to get the “right agreement.”
According to Kerry, that means a deal that must “close off all of the pathways for Iran to get fissile material for a nuclear weapon” and put in place “a new level of transparency and verification.” In return, Iran would receive relief from nuclear-related sanctions.

Iran maintains that its nuclear program is entirely peaceful, but the international community is concerned Iran may choose to develop nuclear weapons.

On Nov. 17, the day before the most recent round of talks started, a senior U.S. official said on a media call that an extension had not been discussed and the parties were “focused on whether we can get a comprehensive understanding concluded” by Nov. 24.

Another official at the talks said in a Nov. 25 interview that negotiators resisted discussion on extending the talks until “very close to the end” when it was clear the two sides could not reach an agreement.

Some officials were disappointed by the length of the extension, he said, and would have favored a shorter time frame for reaching an agreement or a longer stay in Vienna to see if an agreement could be reached.

In remarks to the press following the extension announcement, Zarif said that the political agreement could be reached “in a few days” if the countries are willing to be flexible and make “hard decisions.”

UK Foreign Secretary Philip Hammond said on Nov. 24 that negotiators gave themselves four months but aim to reach the political agreement in “three months or so.” Hammond said both sides would need to be flexible to get an agreement. 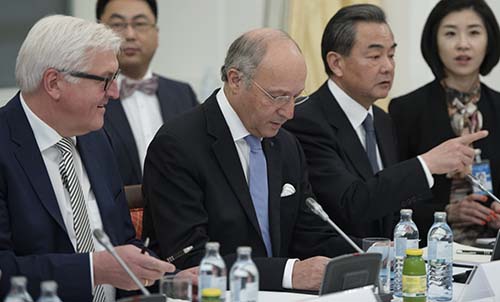 At the time of the first extension in July, negotiators said that Iran and the P5+1 had found common ground on a number of issues, such as the future of the uncompleted Arak heavy-water reactor and the Fordow enrichment facility. But significant gaps on key issues remained. (See ACT, September 2014.)

During the week of talks last month, the two sides made “real and substantial progress,” including on some of the “most vexing challenges,” Kerry said in his statement. Negotiators now see ways to reach agreement on some intractable issues, he said.

Determining the size of Iran’s uranium-enrichment program and the sequence of sanctions relief have been difficult issues for the negotiators to resolve, but a third official at the talks said in a Nov. 24 interview that the sides made “serious progress” on the issue of uranium enrichment.

The official said it has been extremely difficult to find a solution that meets the P5+1 “breakout demands” and leaves enough uranium-enrichment capability intact for Iran to “sell the compromise in Tehran.”

Breakout, in this case, refers to the amount of time it would take for Iran to enrich enough uranium to weapons grade for one nuclear weapon, about 25 kilograms of uranium enriched to a level at which 90 percent of the material is uranium-235. Additional time is required to weaponize the material.

Currently, it would take Iran two to three months to produce enough material for one weapon, according to Kerry’s congressional testimony earlier this year. Kerry has said that the United States wants to extend that time to about a year.

To achieve this goal, the P5+1 wants to reduce Iran’s enrichment capacity and place limits on other elements of its nuclear program, including the stockpiles of enriched material that Iran maintains and the types of new centrifuges that the country is developing.

Iran currently is enriching uranium to less than 5 percent U-235, an enrichment level that would make the material usable in power reactors.

Tehran says it needs to increase its uranium-enrichment capacity in the future to provide fuel for nuclear power reactors it plans to build. Under a contract that runs through 2021, Russia is supplying the fuel for Iran’s only currently operating power reactor, at Bushehr.

Although the third official acknowledged that Iran and the P5+1 likely could not have reached an agreement by Nov. 24 on uranium enrichment, he said that some of the officials at the talks favored a shorter extension of several weeks to close the remaining gaps and expressed concern that the long extension may result in a “loss of momentum.”

Hammond said negotiators need to “take the momentum that has been generated over the last month or so” and “keep moving with it.” 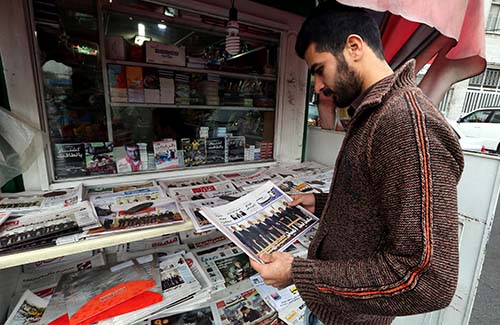 In the Nov. 25 interview, the second official said that finding a compromise on sanctions relief still poses a significant challenge. Iran is subject to U.S., EU, and UN sanctions because of its nuclear activities.

Earlier in the talks, Iran was pushing for an approach that would provide relief from banking and oil sanctions, which are imposed primarily through U.S. and EU measures, in the early phases of a deal, the official said. But when talks resumed in September after the announcement of the first extension, Iran pressed for the lifting of UN sanctions, the official said.

Since 2006, the UN Security Council has passed four resolutions imposing sanctions on Iran in a variety of areas for failing to comply with a July 2006 resolution requiring Tehran to halt its uranium-enrichment activities. The sanctions cover such areas as investment in some parts of Iran’s economy and the import or export of materials and technologies that could be used for Iran’s nuclear and ballistic missile programs.

In March 2006, Mohamed ElBaradei, director-general of the International Atomic Energy Agency, requested Security Council action because he thought it could “serve as a forum to find ways and means to bring back all the parties to the negotiating table.”

Prior to his request for UN action, France, Germany, and the UK were negotiating with Iran on its nuclear program after the international community discovered that Iran was building the Natanz facility in secret.

There are concerns about lifting sanctions too early because the P5+1 wants to ensure that Iran continues to comply with a comprehensive deal for the long term, the second official said. If the sanctions relief comes too early, it may be difficult to reimpose measures if Iran does not adhere to the agreement, the official said.

Kerry said the P5+1 wants to “terminate the sanctions” but “the world still has serious questions about Iran’s nuclear program.” Iran will need to take “concrete, verifiable steps to answer those questions” before the sanctions are terminated, he said.

Bernadette Meehan, spokeswoman for the U.S. National Security Council, said on Oct. 19 that the administration has been “clear that initially there would be suspension” of sanctions and that termination of the sanctions would come after Iran meets “serious and substantive benchmarks.”

The president has the authority to waive most sanctions on Iran for national security purposes for short periods of time.

Additional Sanctions Threatened
Under the interim agreement, the United States pledged not to impose any additional nuclear-related sanctions on Iran.

Although those conditions still apply to the extension, the second official expressed concern that U.S. members of Congress may “disregard the negotiators” and press ahead with sanctions that could “spoil the chances of a deal,” particularly once the Republican-controlled Congress convenes in January.

In the Nov. 4 elections, Republicans gained control of the Senate and increased their majority in the House of Representatives.

After the announcement on extending the talks, several members of Congress spoke out in favor of new measures to put additional pressure on Iran.

In a joint statement, Sens. Lindsey Graham (R-S.C.), Kelly Ayotte (R-N.H.), and John McCain (R-Ariz.) said the “latest extension of talks should be coupled with increased sanctions.” Although the senators said they support diplomatic efforts, they also said they were concerned that allowing Iran any enrichment capability in a deal could lead to a nuclear arms race in the Middle East.

Kerry asked Congress to support the extension and said that negotiators have “earned the benefit of the doubt” by producing an agreement that has worked and has not been violated by either side. Although Iran receives limited sanctions relief under the interim agreement, the sanctions regime “remains intact,” Kerry said.

Sen. Chris Murphy (D-Conn.) said it would be “unwise” for Congress to pass new sanctions during the extension and that such new sanctions would be a violation of the interim agreement. Murphy said it is important that the United States is not responsible for a “breakdown in negotiations.”

Sanctions would create an opening for Iran “to retaliate by resuming uranium enrichment to 20 percent, adding new and advanced centrifuges, or other dangerous and escalatory measures,” Murphy said.