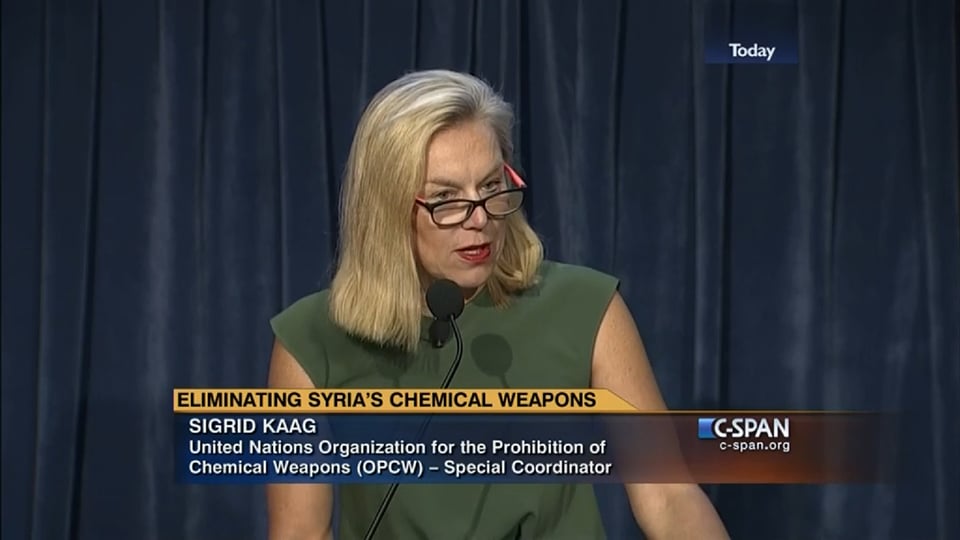 Media reports citing anonymous UN diplomats’ accounts of the closed briefing said the declaration comprised three research facilities and one production facility. In an Oct. 27 e-mail to Arms Control Today, Paul Walker, director of environmental security and sustainability for Green Cross International, said the production facility and one of the research facilities were for ricin. The other two research facilities were for more general research on chemical weapons, said Walker, a former staff member of the House Armed Services Committee and current member of the Arms Control Association Board of Directors.

OPCW spokesman Michael Luhan confirmed that Syria had made the declaration, but declined to provide details beyond the number of facilities. In an Oct. 27 e-mail to Arms Control Today, he noted that the OPCW in April had established a “declarations assessment team” (DAT) to "clarify anomalies and discrepancies that have arisen with Syria’s initial declaration” of its chemical weapons program. The Syrian government declared the additional facilities “after reaching agreement with the DAT on their declarable status,” he said.

The OPCW is the implementing body for the Chemical Weapons Convention (CWC), which Syria joined a little more than a year ago.

In response to an August 2013 chemical weapons attack on the Damascus suburb of Ghouta, which the United States, other countries, and most independent analysts attributed to the regime of Syrian President Bashar al-Assad, the Obama administration appeared poised to launch punitive military strikes against Syria. But Secretary of State John Kerry and Russian Foreign Minister Sergey Lavrov negotiated a deal under which Syria, which has close ties to Russia, agreed to join the CWC and destroy its chemical arsenal under an accelerated schedule.

According to specialists on the CWC, it is not unusual for countries to make minor revisions to their initial declarations as their chemical destruction progresses. But reports have circulated for months that the Syrian discrepancies went beyond that category.

On Sept. 21, Kerry expressed “deep concerns regarding the accuracy and completeness” of Syria’s initial declaration. Power, in her Oct. 7 tweet, said, “Must keep pressure on regime so it doesn’t hide [chemical weapons] capability.”

At an Oct. 7 roundtable discussion with reporters, Andrew Weber, outgoing assistant secretary of defense for nuclear, chemical, and biological defense programs, said that “[t]he strategic threat of Syria’s chemical weapons has been eliminated” but that there may be “some tactical, small things that were not declared by the Syrian regime.” There is “a system in place to deal with that,” led by the OPCW, he said.

Another ongoing part of Syria’s chemical disarmament is the destruction of 12 production facilities—five underground structures, which are part of a system of tunnels, and seven aboveground hangars. After extended negotiations with Syria, the OPCW on July 24 announced an agreement on a plan for destroying the facilities. (See ACT, September 2014.) Under that plan, destruction was to begin in late September. By late October, however, the work had not started. In his Oct. 27 e-mail, the OPCW’s Luhan said it “has been delayed by contract issues.”

In Sept. 30 remarks at Georgetown University, Kaag said the destruction of the facilities “hopefully” would be completed by April. Kaag was speaking on the last day before the official expiration of the OPCW-UN joint mission that she headed.

The OPCW has responsibility for pursuing the remaining issues related to Syria’s chemical weapons program. Kaag will continue to have a role in this effort as an adviser to UN Secretary-General Ban Ki-moon.

In September 2013, the Security Council adopted Resolution 2118, which approved a plan formulated by the OPCW Executive Council for destruction of Syria’s chemical arsenal. (See ACT, October 2013.)

When it joined the CWC last year, Syria declared about 1,300 metric tons of chemical weapons agents. About 10 percent of the stockpile was destroyed in Syria; the rest was shipped out of the country for destruction elsewhere. About 600 metric tons were neutralized aboard the MV Cape Ray, a U.S. ship, in July and August. The remainder, along with the effluent from the Cape Ray operation, went to facilities in the United States and Europe to be processed.

As of October 20, about 98 percent of the declared arsenal, including all the high-priority chemicals, had been destroyed, according to the OPCW.