Negotiators for Iran and six world powers are focused on reaching a comprehensive nuclear deal by Nov. 24 and are not discussing extending the talks, officials representing the two sides said last month after three days of meetings in Vienna.

After little progress was made during talks in September to narrow the remaining gaps between the positions of Iran and the six-country group known as the P5+1, some officials and analysts said a deal may not be possible by the Nov. 24 deadline. (See ACT, October 2014.)

But that sentiment seemed to shift after talks in October. In an Oct. 15 press briefing, a senior U.S. official said that negotiators “have not discussed an extension” and remain focused on a “full agreement” by Nov. 24.
Iranian Foreign Minister Mohammad Javad Zarif said on Oct. 16 that there are “tough decisions” that must be made before the deadline but that there is “no need to even think about” an extension. In August, Zarif had said a deal by the deadline was unlikely.

In July, Iran and the P5+1 (China, France, Germany, Russia, the United Kingdom, and the United States) agreed to extend negotiations on a comprehensive nuclear deal through Nov. 24. An interim deal reached by Iran and the P5+1 in November 2013 originally set a target date of July 20 for reaching a final agreement.

In remarks at the Center for Strategic and International Studies on Oct. 23, Wendy Sherman, U.S. undersecretary of state for political affairs, said that “this is the time to finish the job.”

Sherman, the lead U.S. negotiator, said that Iran “will have no better time” than between now and Nov. 24 if Iran “truly wants to resolve its differences with the international community” and bring about a lifting of sanctions.

Since July, members of the Iranian and P5+1 delegations have met in a variety of formats, including bilateral talks between the United States and Iran in August. The P5+1 and Iran also met for more than a week in New York in September.

Most recently, on Oct. 15, U.S. Secretary of State John Kerry met with Zarif and EU foreign policy chief Catherine Ashton, the lead negotiator for the P5+1. A meeting of representatives from all seven countries took place the following day.

According to an Iranian analyst following the talks, there is a “change in tone” and an “increased optimism” in Iran that a deal will be reached by the November deadline.

In Iranian media coverage and political commentary, there are positive signs regarding the prospects for reaching an agreement that were not present after the September round of talks, the Iran-based analyst said in an Oct. 20 interview. Now, he said, it appears that political leaders in Iran are laying the groundwork to prepare the public for an announcement of an agreement.

But he cautioned that an agreement would be reached only if it “respects the rights of Iran and its nuclear vision.” The analyst was referring to Iran’s plans to build additional nuclear power plants.

Throughout the talks, the size and scope of Iran’s uranium-enrichment program has been the most significant issue.

Iran says it needs to increase its uranium-enrichment capacity to provide fuel for nuclear power reactors it plans to build. Under a contract that runs through 2021, Russia is supplying the fuel for Iran’s only currently operating power reactor, at Bushehr.

The P5+1 wants to reduce Iran’s enrichment capacity and put limits on other elements of its nuclear program, including the stockpiles of enriched material that Iran maintains and the types of new centrifuges that Tehran is developing. These limits would increase the amount of time it would take for Iran to enrich uranium to provide enough weapons-grade material for one bomb. In such material, more than 90 percent of the material is uranium-235. Iran currently is enriching uranium to less than 5 percent U-235, an enrichment level that would make the material usable in power reactors.

In his Oct. 16 comments, Zarif said progress is being made on “all the issues.”

Sherman said in her Oct. 23 remarks that the United States is ready to reach an agreement and that the P5+1 has put forward a “number of ideas that are equitable, enforceable, and consistent with Tehran’s expressed desire for a viable civilian nuclear program and that take into account that country’s scientific know-how and economic needs.” 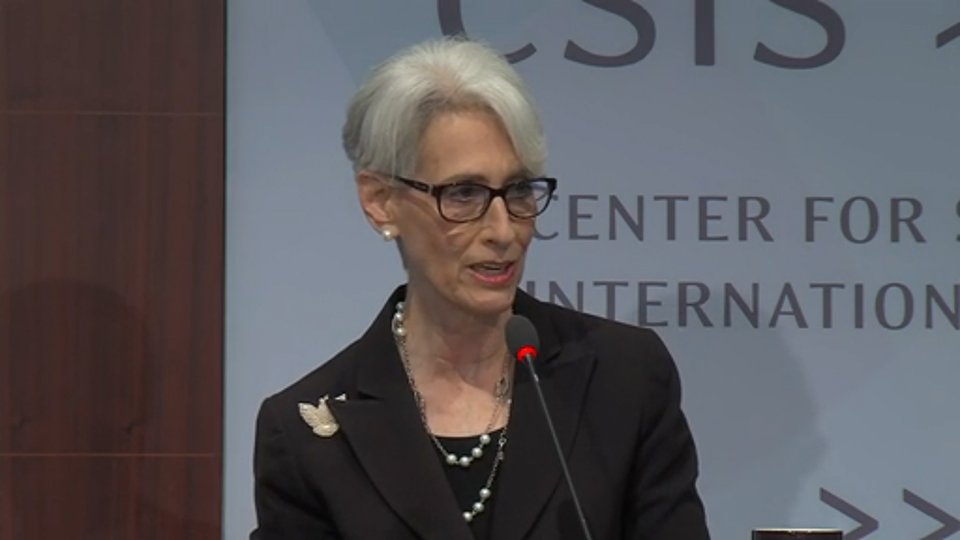 She said that the United States hopes that “leaders in Tehran will agree to the steps necessary to assure the world that this program will be exclusively peaceful” and thus end Iran’s economic and diplomatic isolation. If an agreement is not reached, “the responsibility will be seen by all to rest with Iran,” she said.
Iran maintains that its nuclear program is entirely peaceful.

Citing diplomatic sources, the Associated Press reported on Oct. 17 on a U.S. proposal that would allow Iran to retain a larger number of operating centrifuges than the P5+1 originally proposed if Tehran shipped out a significant portion of its stockpile of reactor-grade uranium for storage in Russia.

Iran currently has about 10,200 operating first-generation centrifuges and an additional 9,000 installed machines that are not enriching uranium. The country has a stockpile of about 7,500 kilograms of uranium gas enriched to reactor grade.

A spokeswoman for the Iranian Foreign Ministry said on Oct. 22 that options for defining the dimensions of Iran’s uranium-enrichment program are being discussed, including the numbers of centrifuges and the transfer of the stockpile out of Iran.

An official based in Vienna said on Oct. 17 that a number of options are being “considered and tweaked” to find a solution. He said there is no “single proposal” on the table for uranium enrichment. An agreement that “everyone can sell” domestically on this issue is possible, the official said. He declined to elaborate on the description of the U.S. proposal in the press.

In an Oct. 23 interview with Bloomberg, Gérard Araud, France’s ambassador to the United States, said that Iran’s last proposal on uranium enrichment was to “keep what they have right now” and have an option to scale up when its nuclear power program expands.

That position is not acceptable to the international community, Araud said. Araud, who served as the French negotiator for nuclear talks with Iran between 2006 and 2009, said that if Iran does not change its position on the centrifuges, it is difficult to see how a deal can be reached by Nov. 24.

In that case, Araud said that the “preferred scenario” would be prolonging the interim agreement reached last November. (See ACT, December 2013.)

The Iranian analyst, however, said that gathering support for extending the talks will be difficult in Iran. Some political factions do not want Iranian President Hassan Rouhani to succeed in reaching a deal because it could increase his popularity, he said.

In addition, Iran is concerned that the upcoming U.S. elections could result in Republican control of both chambers of Congress, he said. The Republicans currently control the House of Representatives and are seen as having a good chance of gaining a majority in the Senate. This will make some in Iran “less sure that the United States will follow through” on sanctions relief in a deal, he said.